Can I turn off Google Chrome's new prerendering?

According to the Google Chrome Blog for Thursday, January 5, 2012, Chrome had added a beta feature where it sometimes loads a web page in the background before you finish typing the URL. When you do finish and press enter, it can just display it. I can confirm that as of version 17, this feature is in the stable release.

How can I turn off this prefetching?

I am a developer, and this feature just caused me some confusion; it appeared that one of my web apps was doing a "double redirect", but the actual cause was that Chrome requested the page once while I was typing the URL and again when I pressed enter. (This behavior is not totally consistent, either.)

I have searched for "prediction" in preferences and unchecked the following:

To turn off prerendering completely, disable the following:

Yes, you can. The google developer whitepaper on prerendering, in the "Debugging prerendering" section, says:

You also have the option of disabling the Chrome 17+ feature that can initiate prerendering based on user interaction with the address bar. To disable this type of prerendering, start Chrome with a command-line flag of --prerender-from-omnibox=disabled.

Read the whole section/whitepaper. It's full of good stuff.

It now appears to be here:

The process to disable this looks a little different than iglvzx's answer. 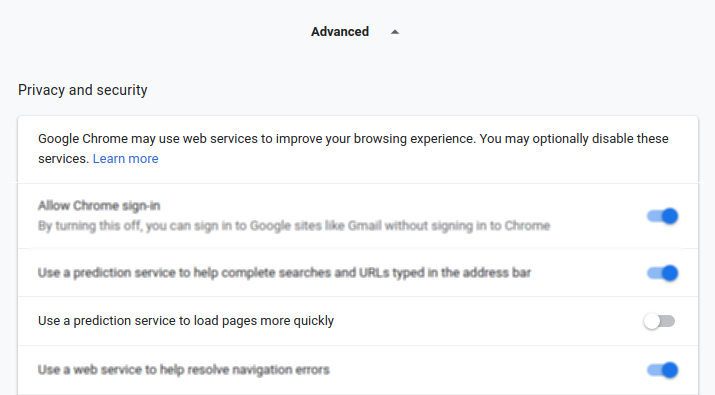 72
Disable auto-refresh tabs in Chrome Desktop
1
Why does Chrome need DNS lookup when the URL just an IP address?
1
Why do I need disable DNS prefetching / network prediction in Firefox, Chrome for them to be usable?

31
Make Chrome's Omnibar behave more like the Firefox AwesomeBar
1
How do I get Chrome 17 to prerender pages during autocomplete?
13
URL autocomplete no longer working in Chrome
5
Google chrome disable url suggestions from history
0
Chrome not showing predictions from default search engine (Google)
5
How to disable desktop Chrome inline auto-complete?