`^M` in many lines in source code files. How can I remove them?

Someone recently sent me a couple of .cpp source code files. On opening the files with GNU Emacs or GVIM, I found them to have a weird character ^M near the ending of every line.

Here is a screenshot showing what I mean 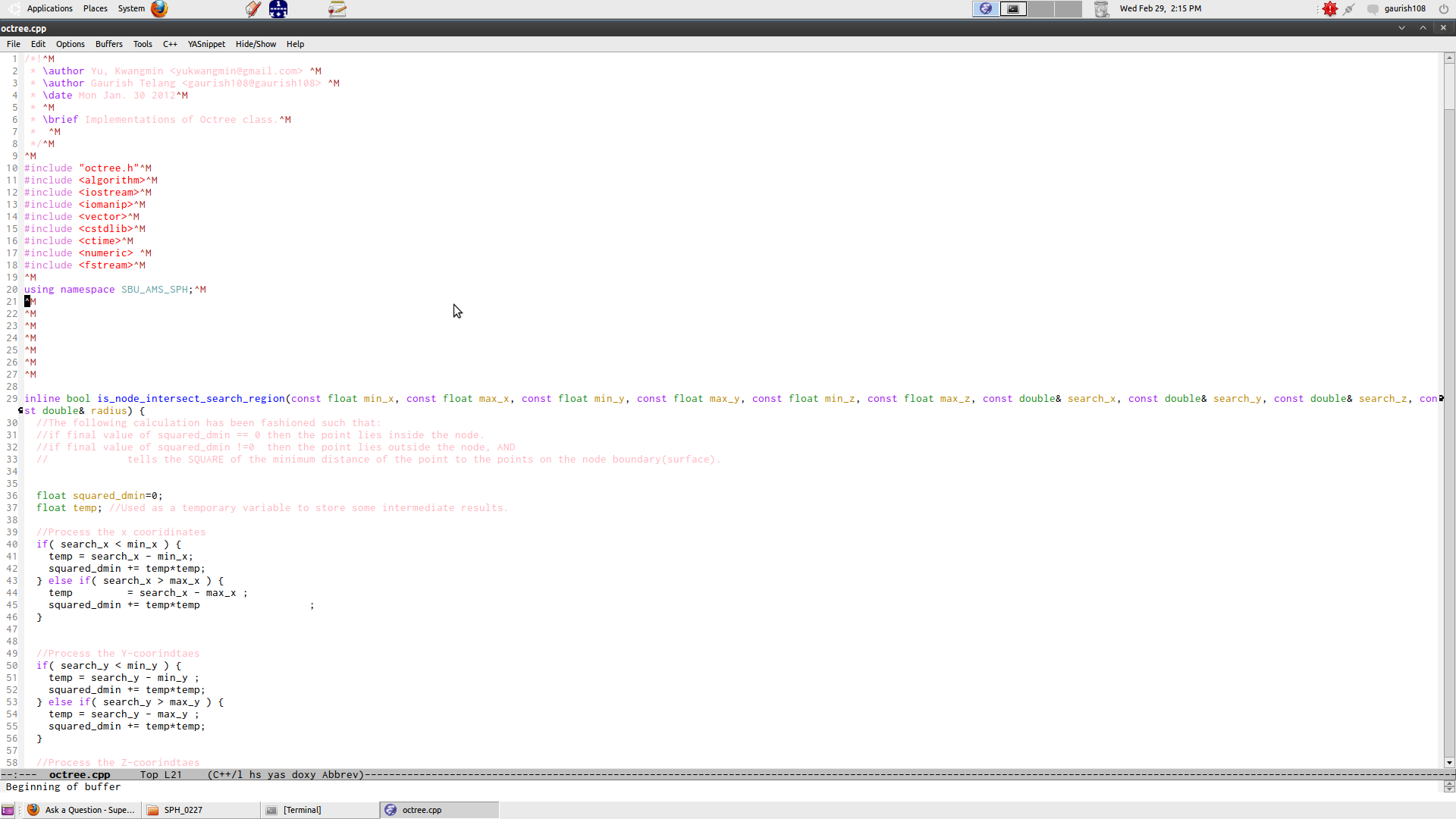 When I open these same source files with Gedit, I do not see these ^M characters. What should I do? There are many files in question here, so opening and doing a search-replace operation by replaceing with an empty string looks like a back-breaking operation.

Strangely enough these files compile cleanly when I compile with GCC. What is going on here. What should I do?

In Unix, the new line character is \n and whereas in Windows it is \r\n. \r or ^M is the carriage-return character.

Alternately, you can run dos2unix on your codebase to fix this problem.

And as you have rightly observed, you would not see any problems in compiling because that is not any extra special character in the code but just a mismatch between newline character interpretation in windows and linux.

You have a source file with mixed Windows and UNIX line endings. While UNIX just used linefeed (sometimes shown as ^J) Windows uses carriage-return + linefeed (sometimes shown as ^M^J). Your editor sees the UNIX lines and says "this must be a UNIX file" but then sees the scattered Windows line endings and says "this is a special character, I must show it".

You can try to convert the file all one way or the other. You can try to use the command dos2unix to convert to UNIX line endings. That will work on the UNIX side, but your Windows side will be confused unless you get a Windows editor that know s UNIX endings.

Or you can use unix2dos and make it all Windows. If you're consistent with the entire file, your UNIX editors (which tend to know Windows endings better than Windows editors know UNIX endings) should be fine. This particular time emacs/gvim was just confused because the file was inconsistent.

As you have seen, the compiler doesn't care what the line ending is.

According to this resource, ^M is a carriage return - that's why you can compile cleanly with GCC.

The reason you see these in emacs/vim is due to how they read things/how things are encoded. The ^M is actually just a Carriage Return (hitting the enter button).

Anyway, you can try doing (in vim, since I don't know the appropriate command in Emacs) :set ff=unix, and then :w, which should turn it into a Unix format and get rid of it the next time you open it (iirc).

( This link shows you the commands on how to do a S/R for returns in Emacs. )

Not the answer you're looking for? Browse other questions tagged text-editors cross-platform or ask your own question.

6
How Does One Remove Duplicate Text Lines From Files Larger Than 4GB?
6
How can I print source code on OS X with line numbers, line-wrapping, margins, formatting?
8
How do I remove empty lines in Notepad++ after pasting in data from Excel?
0
How can I join two lines together from two separate files in Notepad++?
0
How To Remove Lines Containing Double Email in Notepad++
0
How can I remove all lines not containing email:password in notepad++ or Emeditor
0
How do I remove lines of text before this character?