When would you use apt-get remove over apt-get autoremove?

It depends on how much you trust the dependancy tracker. While almost always correct, there are times when you would want a dependancy to remain, particularly when you are a developer or power user installing software that is not in the repository.

If you always install software through apt-get, without exception, and trust all the dependancies to be correct (which they usually are), then you can use apt-get autoremove and gain a small amount of drive space and a reduced exposure to potential security holes by having it remove packages that no longer have any packages that need them.

But if you install software manually, or develop software, or do not want to deal with a possible dependancy error, then not using autoremove to clear potentially unused packages is probably the safer choice. Regardless of whether you use apt-get autoremove every now and then or not, you will always remove software using apt-get remove Package

The reason it is not the default is that having AwesomeLibrary on the system, unused, is a very minor issue. It will almost never cause problems, and most dependancies don't take up much space. There are exceptions, but the times when removing a dependancy will cause problems outnumber the times when it will solve or prevent a problem.

You can find the description of remove, autoremove, purge, clean and autoclean, as well as the syntax in the manpages for apt-get: man apt-get.

If you are still unsure after reading it though (I was) the best way to clarify it is to try it out.

Below is an example of a full dependency tree for vim: 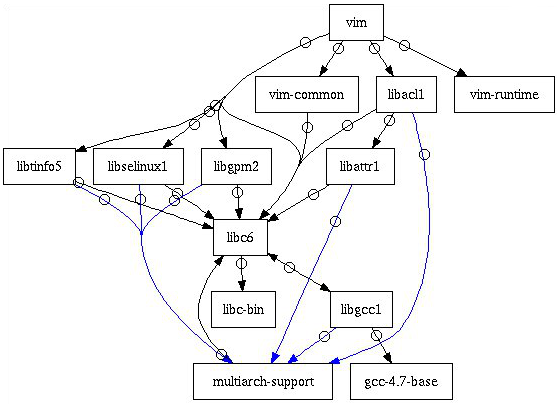 You can get it with:

You can also get a list of the immediate dependencies using apt-cache depends (see Declaring relationships between packages for more info):

So it looks like vim depends on a number of packages, let's attempt to install it with apt-get install and see what happens:

In order to get vim to work we need vim-common and vim-runtime packages and apt-get will take care of it. We can verify it with dpkg -s pkg... (see man dpkg for more info on statuses):

Just as we checked what vim depends on, we can also check what other things depend on the same packages as vim using apt-cache rdepends. We should see vim among (possibly) other things:

Let's continue with the installation. Once we have installed vim we can experience the difference between remove and autoremove. Let's attempt to remove first:

apt-get remove would then remove vim but not its dependencies leaving them behind. Let's now try to remove one of the vim's dependencies:

This would remove the dependency vim-runtime as well as the package that depends on it, namely vim. Out of curiosity, let's see what would happen if we removed a dependency that is lower on vim's dependency tree:

It would remove vim and lots of goodies!

Let's proceed with apt-get remove vim then. Once we have done it we should have some leftovers. If we now try autoremove we can see:

These are the two packages apt-get remove left behind even though nothing else needed them.

According to this: http://ubuntuforums.org/showthread.php?t=996053 autoremove will remove all packages that other programs do not need. You would do 'apt-get autoremove', not 'apt-get autoremove libreoffice'. Also removing unneeded packages does not just free up a little disk space, it reduces the 'attack surface' of your system.

remove will delete the specified program whereas autoremove will include dependencies otherwise not used anymore.

Also, If you'd like to free up drive space, a useful and safe command is...

That removes the aptitude cache in /var/cache/apt/archives

2
Grab all dependencies from apt-get for offline install (Ubuntu 11)
2
Is there a way to automatically get track of installed packages and dependencies?
8
How to list files installed by an apt-get package?
2
apt-get wants to autoremove core packages
0
Ignoring APT dependencies for Java packages
1
Hadoop Uninstall : Shall I remove linux-image packages?
2
Debian Scripting to remove the logging during apt-get install
2
use local package with apt-get