How to copy-paste absolute cell references temporarely as relative references in Excel?

Example -- In the example screenshot, I want to copy the block A2:B3 downwards. When copied, I basically want to have the formula in B3 (=$A$3) changed so that it refers to the cell to the left of it, for example becoming =$A$11 when copied to B11, as in the bottom part of the screenshot.

Workaround -- I have found a workaround to do this, by:

Question -- But this is too many actions for my taste. Is there an easier way (perhaps some Paste Special hidden option)?

you could always try writing a macro for that. excel has a really nice macro recording tool that you could use too, and then just run it as needed (provided you make some changes first of course to the program)

I found the workaroud for duplication.

A work around I have used is to:

You will then notice all of cells have been linked with their respecitve absolutes that you desired on your new and improved sheet.

If I try to follow the steps to cut and paste from a new worksheet I find that all references in formulas stay fixed when copying to the new location including relative references. In fact in Excel 2010 i find that after cutting and pasting formulas, the first row and column contain links to the old sheets but other rows and columns reference the new sheet which looks like a bug??

If you are wanting to copy a block of formulas keeping all references the same, you can press Ctrl+` (backquote) to show formulas and then copy and paste by clicking the icon on the Clipboard task pane (activate using small arrow on clipboard section of Home Tab). If this is not what you are trying to achieve, a simple example would help.

I have been trying this macro (stored in Personal.xlsb and bound to shortcut key) to convert references to absolute before copying.

The following will work with less complexity then writing your own macro and achieves the final result.

Yes, I know I'm not using the Absolute cell reference but as shown in OP's example you don't need it.

Select range that you want to copy 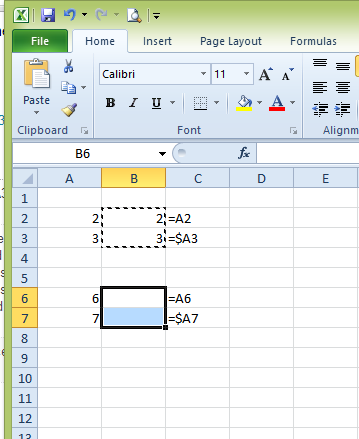 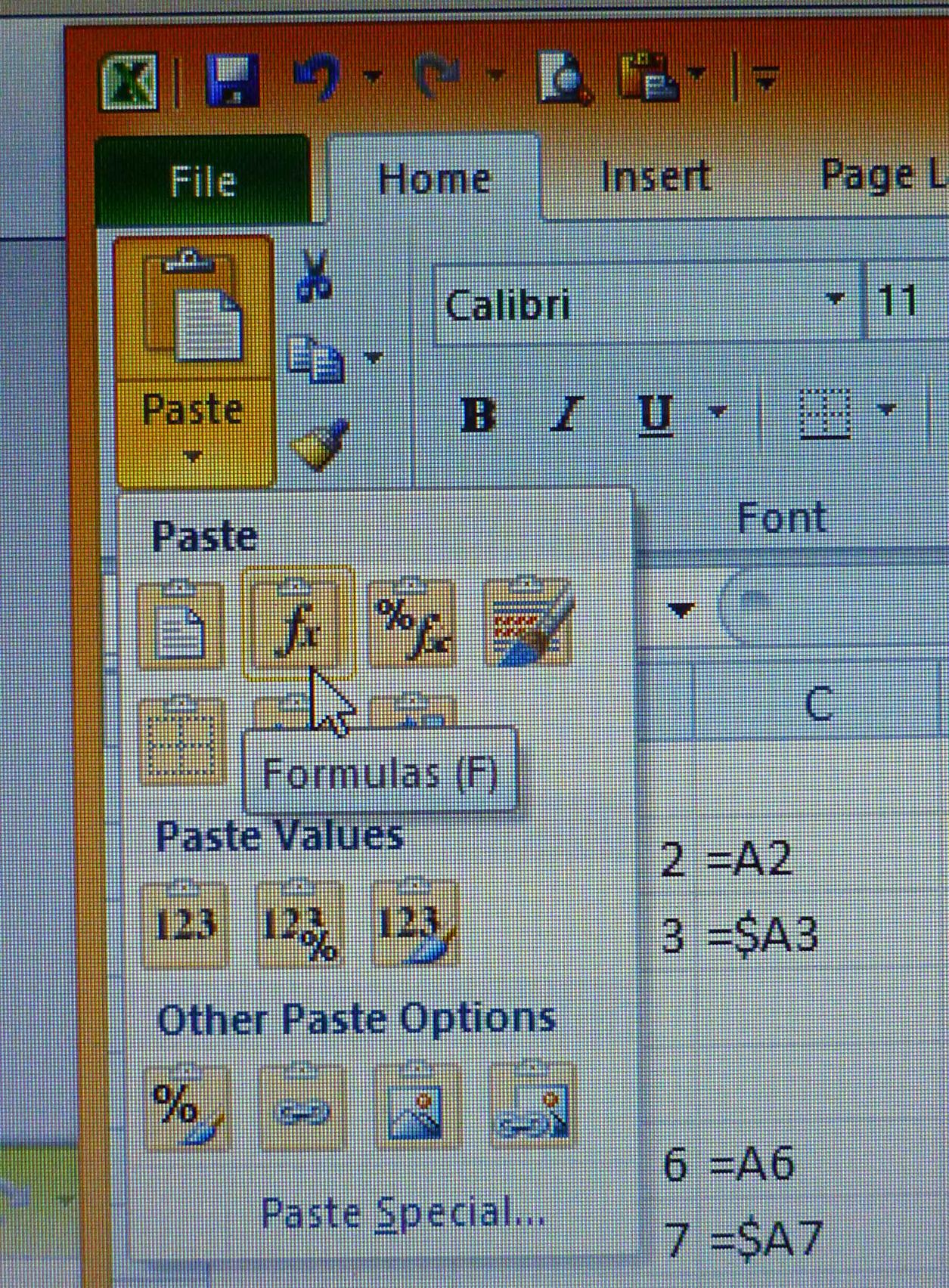 I had a similar problem. I have a very big spreadsheet with thousands of formulas, some with column absolute, and some with both column and row absolute. I wanted to make a side-by-side duplicate on the same worksheet, instead of making a duplicate on a new spreadsheet. I needed to copy all of the formulas and have Excel treat absolute references as relative references.

Excel will change all addresses as if they are relative when you insert a column to the left of the range of cells with the formulas.

I just found a partial workaround. It's not as general as the copied-worksheet-and-cutting-range workaround in the OP, but it can be much faster if you just need to quickly copy something. What we all really want here tho is a way to temporarily disable the absolute references while we copy. There could be an option to allow you to hold alt when you paste to ignore every $, like they just weren't there, but they actually still are once the paste is completed.

So, with that in mind, to copy a block of cells while allowing the absolute references to update:

Due to the total number of columns, XFD# is the last valid cell reference. Make sure the new references generated don't overlap an actual reference in your range of cells or that reference will be broken in the last step. Choosing a letter from a column you never reference in your block of cells to be copied will ensure you do not break any formulas. As an example, if you replaced $ with 'h', $b$42 would become hbh42, which is still a valid reference that can now be copied and will update automatically!

You can try replacing the $ with 2 letters in some cases, but that has a number of problems of it's own, so it would be easier to find a 1 letter replacement that won't overlap an actual reference.

Not the answer you're looking for? Browse other questions tagged microsoft-excel keyboard-shortcuts copy-paste or ask your own question.

0
Shifting Formulas When Copying in Excel