Which Google Updater is the one that I should allow to run?

My machine has 5 Google updaters running:

Now obviously Google doesn't need all these items running at the same time; some are going to be legacy duplicates.

Which one is the current, true, preferred, Google updater?

After installing Chrome in a fresh VM and checking autoruns, these are the only entries created: 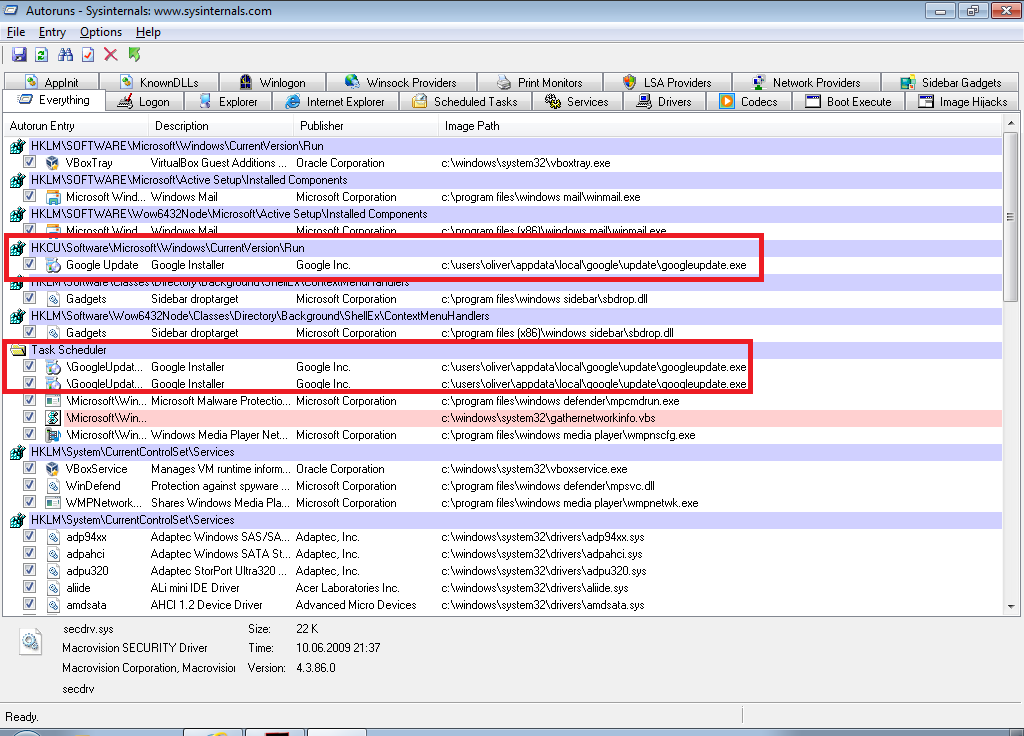 Here are the two tasks listed in the Task Scheduler: 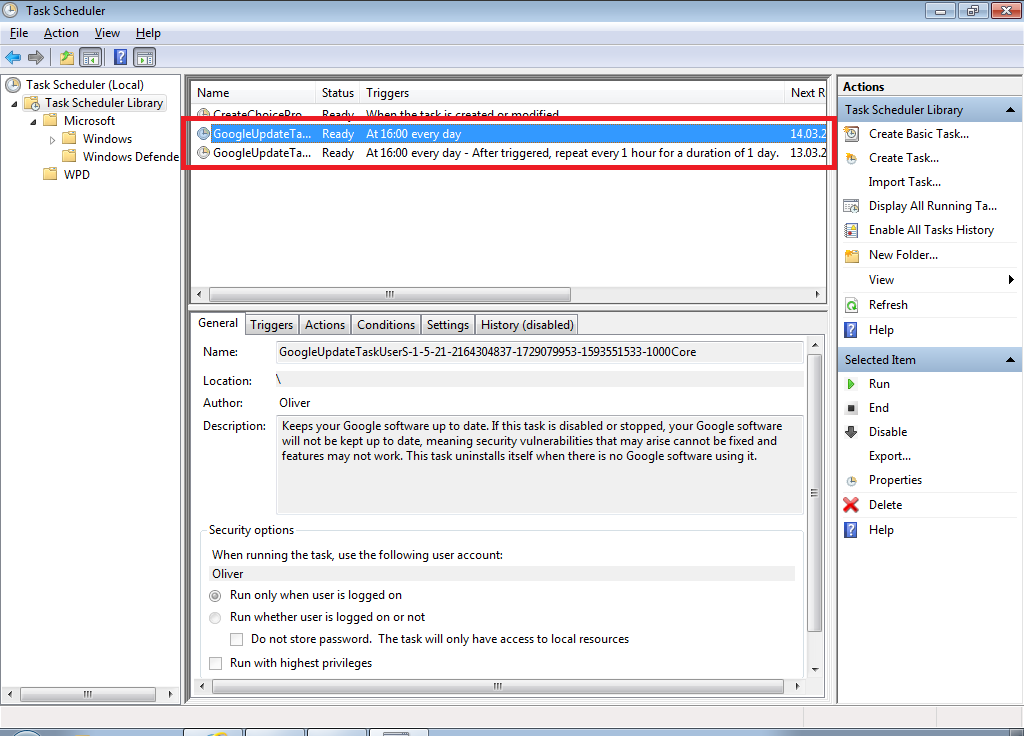 The upper task points to:

The lower task points to:

And the legacy services can be deleted from the machine using Microsoft's sc command line tool from an elevated command prompt:

For computer security I used a product call Deep Freeze. I keep my Windows 7 C drive frozen except when I want to make a change to my system about monthly. Since my C drive is frozen, every time I reboot my computer the C Drive is returned to it original state removing unwanted junk including viruses, cookies, etc. All documents and data files are kept on other disk drives.

Turning off automatic updates for other software packages has been generally less annoying than Google Updates.

PS. I removed Google Drive and the Firefox Browser before I discovered the real problem was Google Updates. Hope this helps others save hours of frustration trying to regaining control of their computers.

In the Task Scheduler, cc the Google Update links to take you to the relevant GoogleUpdate... dialog page.
Click the Schedule tab. In the drop down menu for Schedule Task, pick weekly, monthly or whatever you prefer. If you choose weekly, it then offers you an opportunity to pick day and time and even how many weeks between running the update. Once a week at 2 am is no hardship on any one and it reduces the number of entries in the Scheduled Tasks log.

To partially answer the question, at least for the two scheduled tasks, after installing Chrome, these tasks are created: "GoogleUpdateTaskMachineCore" "GoogleUpdateTaskMachineUA" The first one (for me at least, Win10) has two triggers, "At log on of any user" and a daily 11:08 with repeat (something like that; I've already altered the schedule). Both tasks run the same exe, but with slightly different parameters. The MachineCore runs "%PROGRAMFILES(x86)%\Google\Update\GoogleUpdate.exe /c" while the MachineUA runs "%PROGRAMFILES(x86)%\Google\Update\GoogleUpdate.exe /ua /installsource scheduler"

Personally I disabled the Core "log on of any user" and altered the schedule on the 2nd trigger to just run once a day M-F. The UA task I disabled entirely, as it appeared to be the more intrusive. But that's just guess-work. To know for sure, we'd have to know what the executable and the parameters do.

In response to one of the comments, to be fair, no one really answered the question, "which one should I allow to run" (with the possible exception of the trivial though valid comment by Fo...). For that, we'd need to know more about the Google updater than any of appears to. :)

4
windows 7 turns off itself everyday at about 9am
9
How to Restart Windows Update Service in Windows 7?
6
Why are my Windows 7 updates continuously failing?
1
Network Services disabled (not starting) on Windows XP
9
How to disable Google Chrome's Auto-update feature?
0
How to completely remove leftovers of uninstalled software
0
How did my Google Chrome get switched to the "dev-m" channel?