I'm currently running very large network simulations for my PhD research, for which I need lots of RAM. I have a Core i7 2600K processor with a Gigabyte GA-Z68AP-D3 motherboard, running Windows 7 professional 64bit.

When I rebooted the system, boot time was much longer than usual (10 mins just to get to login screen). After logging in, the whole system was unresponsive. I tried playing some games (Bioshock 2), but it was unplayable. I've not had this problem before and I have an ATI Radeon HD 5850 graphics card, so that's not the problem. The only thing that's changed is the RAM.

I've looked through the specifications of Windows, my motherboard and my CPU and they all state that 32GB of RAM is supported. Does anyone have an idea of what's going on? Any help would be greatly appreciated.

More info: Thanks for all the answers guys. Will try the proposed solutions and report back tonight. To answer some of the questions:

Testing method: I've now tested my slots and modules in the following way to try and quickly rule out bad slots or modules:

Doing this I can only conclude that all my modules and slots are fine and that there's some other hardware or software constraint that preventing me from getting all my RAM working.

When we experienced this issue, we fixed it by enabling the on-board VGA (set to on all the time, not just when a graphics card is not present) and increasing the onboard graphics RAM to the max (400+ MB) in the advanced section of the BIOS. After this, the computer started up in under 20 secs.

It sounds like faulty RAM to me. The motherboard might have adjusted the speed down until it worked.

memtest86+ is a good bootCD to run a test with:

And CPUZ gives excellent information on the current state of your hardware:

Definitely look at the timings on each RAM module. Whilst the speed my match if their timings are miss-matched you would get a slow down.

Turn on on-board graphics and allocate as much RAM as possible to it.

I submitted a support request with Gigabyte, this was their response:

It is known issue that using 32GB memory will require onboard vga shared memory to be set to 256MB. If with 32GB RAM the system gets poor performance then please set Onboard VGA to “Enable If No Ext PEG”

Worked for me certainly: 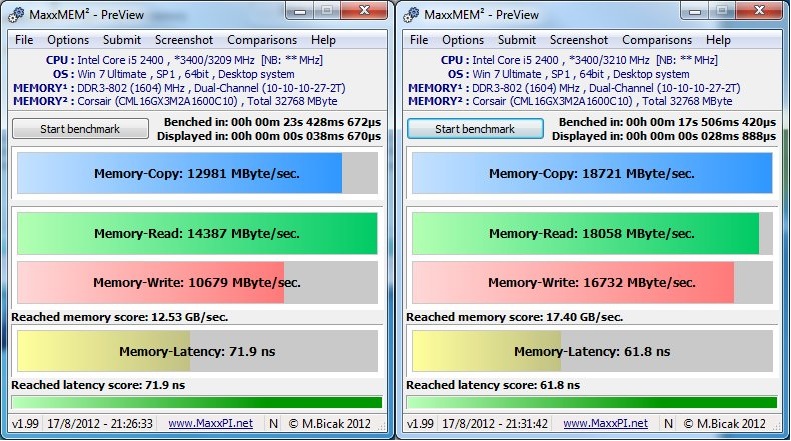 3DMark before and after

I have seen this issue in the past and the problem was quite elusive:

Memory modules have a chip on them called the SPD which identifies to the motherboard operating parameters. The sticks of RAM I'd installed needed to run with about 2.1 V but the SPD chip was identifying them as a previous model which ran on just 1.8 V.

Hence my motherboard powered them with insufficient voltage. I was told by the manufacturer that this shouldn't be an issue, however the additional current the modules were pulling because of the lower voltage and the fact I had four of them in apparently a 'not very good motherboard' meant running with four caused poor performance and random BSOD's.

Overriding the voltage of the modules to what the manufacturer specified in the tech spec resolved all these issues.

Perhaps try identifying the SPD information from a diagnostics program like Piriform's Speccy and then comparing this to the given tech spec on the manufacturers website. Set the modules to these values manually to check it fixed it.

You just install RAM of 4GB and test one by one in your board and check the speed of your computer. The problem may be in your new RAM or your motherboard-RAM slot. So try this one by one. I hope you will get solution.

Things I would try:

If all the previously suggested answers did not work for you, flashing your BIOS with a newer firmware is a good option. Some motherboards have trouble with large amounts of RAM and newer BIOS firmwares are typically introduced by mobo manufacturers to resolve RAM incompatibility issues as well as performance issues with a large amount of RAM.

I solve the problem using this computer :

I updated an Award BIOS (FD) to the EFI bios (UE5). Work like a charm. EFI bios are beta however so watch out.

I have a similar situation - and I'm not running Windows. I can run all day with 16GB at "normal" memory settings - the X.M.P. profile (doesn't matter which memory modules I install). But when I install 32GB if I don't lower the memory speed (less than the X.M.P. specs) in the BIOS I will get memory errors. The slightly lower speeds are not crucial but I need the extra memory for running virtual machines. Download the System Rescue CD and use its memory test to find a working configuration.

You have to upgrade to either the Professional or Ultimate edition of Windows.

I had this problem when I increased my RAM to 24 GB. I had to upgrade to Professional and it worked fine. 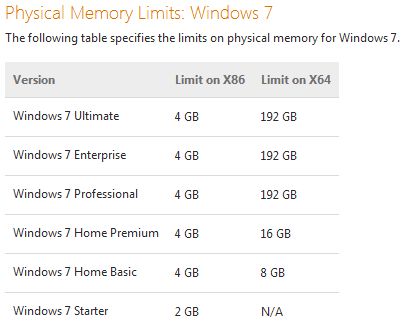 Here's a link that will tell you which version to use based on it's memory limits:

Not the answer you're looking for? Browse other questions tagged windows-7 memory performance or ask your own question.

1
Computer slow when there is over 8GB RAM