Creating a .reg file for Windows 7

I created a .reg file but when I double-click it, it doesn't want to be imported.

The specified file is not a registry script.You can only import binary registry files from within the registry editor.

Could someone help me? Thanks in advance

I don't know how those quotes ended up in that file, but I would assume those don't work (maybe you copied it off a Wordpress blog).

Besides anything else, I think it should be like this:

That's not the valid syntax of a registry file, it's missing the header.

Add a line in front with: Windows Registry Editor Version 5.00

Check whether there are invalid characters, if you saved the file in Unicode that could be the problem.

Just compiling all the answers together with some extra info I discovered.

The allowed encodings also seems to correspond to the Windows API strings which are:

Note: when a text editor says "unicode" for the encoding, it probably means UTF-8 which is a variable width encoding not naively compatible with internal Windows.

Note 2 (edit): ASCII is 7-bit and all the processors I know of in use are a power of 2 bits so it's always going to be wrapped in some other ASCII superset like 1252. #thingsyoulearnafteruni

Take a look at this website, it helped me with this problem: “The specified file is not a registry script” – How encoding can ruin your morning

Turns out that encoding can ruin your morning. Taking a look at the message I saw the “… only import binary registry files from …” and I thought “Why does this thing think it’s binary?”. Why, indeed. I opened the file back up in TextPad and rather than just hitting Ctrl+S or Save, I chose "Save As". Doing so presented this menu, and I’ve highlighted my problem: 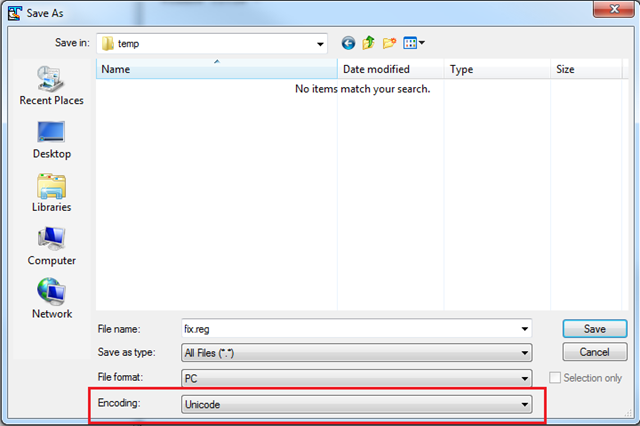 That’s right. Without me doing anything, TextPad was going to save this file as Unicode. Regedit expects to get .reg files that are ANSI encoded. So I changed the Encoding to ANSI, saved the file, ran it again, and everything worked fine. It caused me some frustration for a good 20 minutes, so hope this helps someone else out.

I had the same problem because I saved it as UTF-8-BOM. It should be UTF-8 without BOM (Byte Order Mark). It's worth noting.

You can also use the REG utility to manipulate registry via command line, if it fits your needs.

Not the answer you're looking for? Browse other questions tagged windows-7 windows windows-registry or ask your own question.

17
Easiest way to get right-click “Open command window here” with admin priveleges in Windows 7
4
How to recover my .xml default icon?
4
Creating custom file extension with windows registry
5
How to force Chrome disk cache size and directory location?
4
Does exporting a registry key in hive binary format preserve permissions and how can I import them to another machine?
1
How do I delete registry subkeys using .reg file?
1
Why this reg file gets rejected by the windows 7?
1
Reg file for Windows 7
2
View a .reg file without modifying registry
0
Windows: Registry: Can't associate a file with a verb