How to set friendly network name of android computer?

I see names of computers in my router's DHCP leasing list. My android galaxy tab is listed under an alphanumeric name. How do I set a friendly name that I like?

If you are on Android 5.0, that option is not there anymore. Though using the ADB shell still works. See bayuah's answer. Root doesn't seem to be required on my phone. From the answer linked above:

Hostname is used to easily identify and remember hosts connected to a network. It's set on boot, e.g. from /etc/hostname on Linux based systems. Hostname is also a part of DHCPREQUEST (standardized as code 12 by IETF) which a DHCP client (Android device in our case) makes to DHCP server (WiFi router) to get an IP address assigned. DHCP server stores the hostnames to offer services like DNS. See details in How to ping a local network host by hostname?.

Android - instead of using Linux kernel's hostname service - used property net.hostname (since Android 2.2) to set a unique host name for every device which was based on android_id. This hostname property was used for DHCP handshake (as added in Android 2.2 and 4.0). In Android 6 net.hostname continued to be used (1, 2, 3, 4) in new Java DHCP client when native dhcpcd was abandoned and later service was removed in Android 7. Since Android 8 - when android_id became unique to apps - net.hostname is no more set, so a null is sent in DHCPREQUEST. See Android 8 Privacy Changes and Security Enhancements:

net.hostname is now empty and the dhcp client no longer sends a hostname

So the WiFi routers show no host names for Android 8+, neither we can set / unset / change it.

However on rooted devices you can set net.hostname manually using setprop command or add in some init's .rc file to set on every boot. Or use a third party client like busybox udhcpc to send desired hostname and other options to router. See Connecting to WiFi via ADB Shell.

In some Android phones, you may change in Wi-Fi Direct

Important: Not all Android phones have this option, and not all phones modify their hostname correctly, even after modifying the device name from that option.

Just wanted to reference another related solution I came across using ADB (and requires rooted device): http://nileshgr.com/2012/10/13/how-to-change-wifi-host-name-of-your-android-device. I would however prefer the ADB commands presented here on SO than this link, but it's another method at least.

The name that is sent to the DHCP server is not the hostname as is commonly thought, it's the VID (Vendor ID Code) which you cannot change. You could try changing the name at the router level if possible.

On my Galaxy Edge S7 the device friendly name can be changed under "About phone" (near the bottom of the Settings menu): 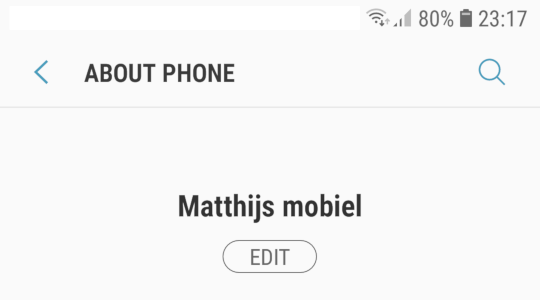 Since I configured it to "Matthijs mobiel", our local router gave me the hostname "Matthijs-mobiel.fritz.box". Unfortunately it sounds like your router might be assigning a name based on MAC address rather than based on the device friendly name, in which case this probably won't help (though you can try configuring a name that's a valid hostname already, perhaps it will work).

This solution is using the commands posted by @bayuah above, but not using adb nor su at all. This is on a rooted device (Nougat AOSP 7.1.2). Using JuiceSSH terminal, enter two commands:

On LineageOS 10, I could simply search in the settings for hostname and it led me to

This answer of course requires to have developer options activated, but other than that it is possible that it also works on other android versions than LineageOS.

Root access is required though, sorry for the non-rooted users.

Not the answer you're looking for? Browse other questions tagged networking android or ask your own question.