DVI to VGA adapter only working in one output

I have a AMD Radeon HD 6800 Series graphics card which has 2 DVI outputs. I tried to set it up with 2 monitors which both have vga connectors on the end and used 2 dvi to vga adapters like these. 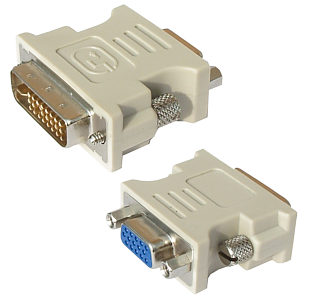 I then randomly decided to plug a different monitor into the second output which has a dvi connector on the end so there was no need for an adapter and plugged it in and it worked!

Does anyone know why the second output on the graphics card won't work with a dvi to vga adapter (and the first output will)? I'm really confused!

There are a variety of DVI ports which support different connections. The ATI 6800 series cards commonly have the following DVI connections:

So only the first supports an analog connection using a simple adapter.

Not the answer you're looking for? Browse other questions tagged display multiple-monitors graphics display-adapter or ask your own question.