After upgrading to 10.6 my printer became unavailable to print to. It behaved as if the driver crashed (when I chose to add the printer over Bonjour) and was removed by the OS. Reinstalling the drivers from HP actually worked out pretty well, but as you can see, four sets of options are now disabled for me: 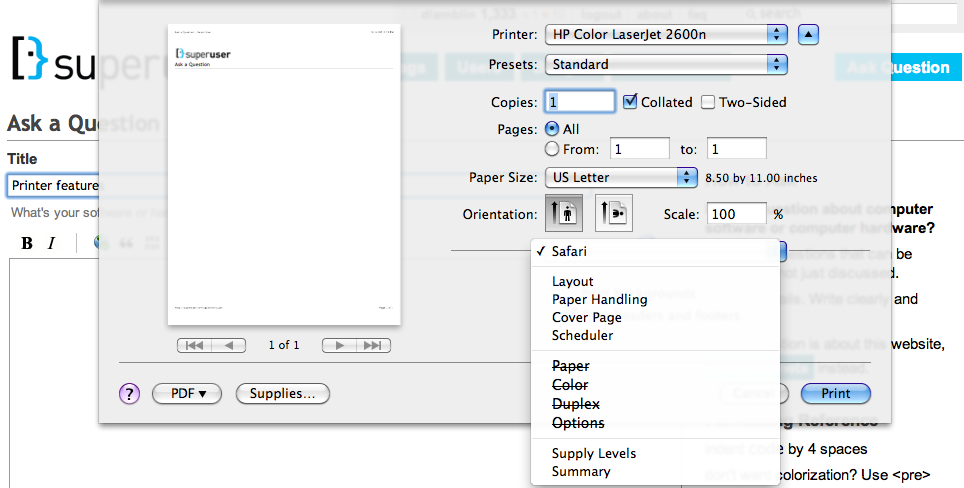 This means I cannot print in greyscale, and I cannot choose to print from manual feed or set the paper type to a label or photo-paper.

The message I get when I choose Paper is:

The bundle "Paper" couldn't be loaded because it doesn't contain a version for the current architecture.

If anyone knows a workaround for this, or spots updated drivers from HP, I'd like to know. The driver version reports itself to be 1.3.

As the printer is discontinued, and clearly the drivers are some of the few which were written by ZenoGraphics, all HP can do is make it clear via their mirthful businesslike royalty-free clip-art that they think the joke's on me:

Update: The latest drivers on 10.6.6 are versioned 1.3.0.261 and move these features around (Duplex seems hidden, but I see greyscale under printer features and then color options. Also the paper choice is there too. So that's kind of a fix. This driver came in the Driver Update 2.4.1 on June 30 2010. That was some wait.

Update: If anyone landing on this page finds they cannot print over the network, but that they can print over USB, it's because of a change in Rendevous aka Bonjour aka Zeroconf aka mDNS. This is not my issue at all. But I have an answer to those people's problem. Update the printer to the latest firmware update from the support site (you must run the update with a Windows PC if you want a network update, other wise use the update with USB on a Mac). The Bonjour implementation on the printer was very buggy for the Mac (though not the PC, possibly endianness differences in some part of the communication?)

If that doesn't work, you may try the steps in this Super User post.

Just installed new Snow Leopard HP drivers today from Apples software update site.. Color Laserjet 2600n will work using usb cable but still refuses to connect over network. It's got to be an issue with the JetDirect hardware in the printer..

I don't know about that, but another hint: ensure any firewall allows for using the network printing. (This, for example, is a requirement to install the Canon iP4000R.)

I had a similar problem with a Canon printer. I had to Get Info on the application (Preview in my case) and check Open in 32-bit mode.

Some applications don't seem to need this adjustment (32-bit only I assume) and others I noticed don't offer the option.

use iTunes9, print, there it is possible to choose the printer-options. Why doesn't work with other programms?

Using the 1.3 HP drivers that work with Tiger/Leopard, I can get the disabled options to work again by making sure the offending application opens in 32-bit mode. E.g. Preview - find the icon in the Applications folder, Get Info on it, then check Open in 32-bit mode. Presumably the old drivers don't work with 64-bit apps.

Choosing Draft Mode in Options sometimes makes the printer choke on a Page is too complex error. I leave it at 2400dpi and it usually works.

The Driver Update 2.4.1 released on June 30th 2010 did fix this, though they moved the options around under "printer features" and may have removed duplex (my printer doesn't feature duplex, so maybe that's added detection). The driver version is now 1.3.0.261.

I also hear that either 10.6.6 or Lion is going with downloading drivers on demand to remove the 100s of megabytes used just for storing drivers to devices you don't have.

Not the answer you're looking for? Browse other questions tagged macos osx-snow-leopard hp-laserjet or ask your own question.

2
Connecting to Canon PIXMA iP4000R over the network
1
How to get an HP and Canon printer to work in Snow Leopard?