It then tries to boot the new VM, but it blue screens during the boot process. The info on the blue screen doesn't provide much in the way of help though. Running chkdsk has no effect. 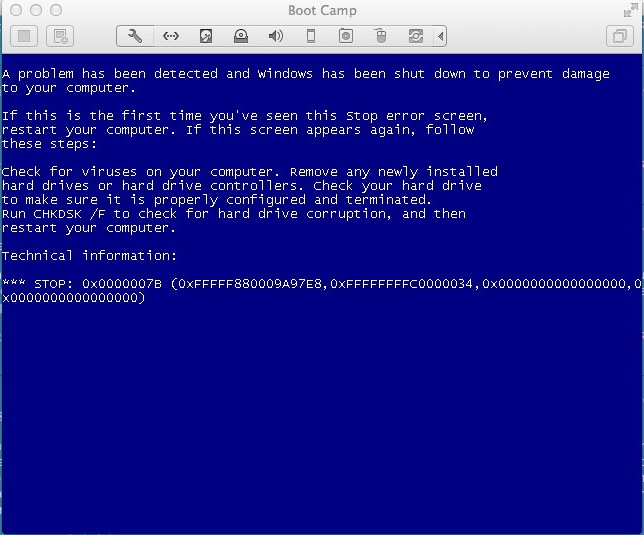 After searching around, some people recommended using VMware's stand-alone converter utility from within Windows to create an image, but the utility said it couldn't create an image because my disk uses a GUID Partition Table (GPT). I'm wondering if this is why it can't boot my BC partition from Fusion. Has anyone else run into this and found a fix?

I remember having seen something similar in the vmware forum discussions and went there to find a post (you can search more if this is not the one) that might help you.

have not played with this for quite some time, but i know it can be done, though not as consistent as you use a virtual disk.

windows, unlike say linux, is very sensitive to hw so blue screen is common in booting a vm from a partition whatever the host.

Not the answer you're looking for? Browse other questions tagged boot-camp vmware-fusion or ask your own question.

7
Visual Studio Development on Virtual Box, Boot Camp, or VMWare Fusion
3
Moving VMWare Fusion image to Boot Camp
3
How do I install Boot Camp drivers without installing Boot Camp
0
Windows 7 SSD Tweaks inside VMWare Fusion
4
Create a VM from DMG disk image created from Windows XP Boot Camp Partition
3
What does the Boot Camp Assistant do to my drive that I can't just do with Disk Utility?
1
Cannot Install Boot Camp on a Mac Fusion Drive
6
How to fix Bootcamp Fusion VM after OSX El Capitan update?
2
How do I successfully virtualise my (Boot-Camp) Window 10 partition so it runs on Hyper-V?