How to remove “System File” attribute from a file without command prompt?

Is it possible to take away a file's "system" file attribute without using command prompt? Basically, I want to do this:

without using command prompt, or a batch file. Windows explorer properties menu lets you do this for the hidden and read-only attributes, is there a way to do it with the system attribute?

If you want something you can do from the context menu, here's one way that might save you some time if you're trying to do this a lot:

Then follow this guide for adding a custom app to the context menu: How to Add Any Application to the Windows Desktop Right-Click Menu

You could then have a menu item called "Remove system attribute" which does just that, using your batch file. This way, you could also create a script to add the attribute back. Might be a bit fiddly getting it to work for multiple file selections, but with a bit of luck it will launch your file once for each selected item. You'll want to test this with:

If it supplies the file names as attribute 1, 2, 3, etc you'll have to loop over all parameters. If more than one parameter is supplied, you could invoke your script recursively like this:

In response to Synetech's comments:

When you use attrib, it won’t change the H or S settings if the other is set (it will say not resetting XXXX file). You would need to strip (or set) both, then change the one that you did not want to modify back to what it was before.

I extended the script to check the 'H' attribute reported by Windows 7's attrib command. To make it more generic, you would need to check more substring positions, as I have a hunch that it's different in other versions. I don't have other versions of Windows handy right now, so I can't check.

or visit http://www.nirsoft.net/utils/bulk_file_changer.html to download the version file of your choice.

some time ago I was using "RemoveR PRO" from - http://www.bigwig.net/softwaredesign/free.htm (dead link now), maybe you can find it in some archives

You can use the AttrMenu shell-extension that creates a context-menu entry for files and folders: 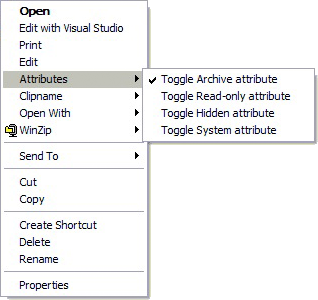 Not the answer you're looking for? Browse other questions tagged windows-7 windows command-line windows-explorer or ask your own question.

0
is there a way to change attributes of all files at the sametime in the desktop using the command prompt
3
Will removing the System Attribute from ALL files break anything on Windows 7?
15
Moving hidden files/folders with the command-line or batch-file
1
Remove command from auto-completion / history
15
Remove read-only attribute from folder after Windows reinstall
15
FOR/DO command gives “Was unexpected at this time” when run from command prompt
3
How to change the Windows Drive Properties Indexing Setting using the Command Prompt?
2
How do I recover System files?