I have a document for a project that I am working on with my team, and I need to digitally sign the document in a way that can be verified by other members of the team. The catch is, internally, we are using PGP (the commercial version, I think). It appears that, for all intents and purposes, PGP is wholly incompatible with any of Microsoft Office's built-in digital signature functions. Ditto for Adobe Acrobat.

This is baffling, because PGP is a defined RFC, 4880, so I would imagine that it is possible for MS to integrate SOME kind of support for either X.509 or PGP. Signing a document using the external PGP software, however, produces a stand-alone *.sig file that has to tag along with the original document for anyone to be able to verify its authenticity. Since I have multiple people that need to digitally sign this document, I have no idea if this means I would need to manage one *.sig for each signee, or if a single *.sig file can hold multiple signatures by different signees.

Is there a solution of some kind that can allow me to digitally authenticate/verify Word or PDF documents using PGP keys amongst members of a team? It'd be great if there is something that can leave a visual mark within the document itself, too.

I figured that if there was a way to export an X.509/PKCS-12 certificate based off of a public PGP key, and then store that certificate in Windows' internal certificate store (certmgr), then maybe I could get Office to pull from that. But this appears to be impossible. I mean, aren't both technically bog-standard PKI certificates?

Assume that each signee has their own PGP keypair with passphrase and that there is an internal PGP keyserver that everyone can sync to.

It appears that, for all intents and purposes, PGP is wholly incompatible with any of Microsoft Office's built-in digital signature functions. Ditto for Adobe Acrobat.

This is baffling, because PGP is a defined RFC, 4880

It is very widely used in TLS (SSL), S/MIME (email), code signing (Authenticode, Java, Android, iOS), document signing (AdES), and so on. Even many governments use X.509-based PKI and issue "qualified" certificates having the same legal status as a handwritten signature. In Office 2010, XAdES-format digital signatures were added to help with that.

so I would imagine that it is possible for MS to integrate SOME kind of support for either X.509 or PGP.

Both Microsoft Office and Adobe Acrobat do in fact use X.509 certificates – any certificate in your Windows certstore can be immediately used in Office (provided, of course, that it has a private key stored and the proper usage bits enabled). In Office 2007, this is under Office → Prepare → Digital signature. 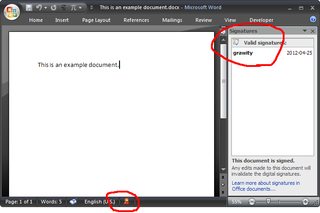 I figured that if there was a way to export an X.509/PKCS-12 certificate based off of a public PGP key, [...] But this appears to be impossible. I mean, aren't both technically bog-standard PKI certificates?

No, they aren't. The only thing OpenPGP and X.509 have in common is their usage of cryptographic algorithms: RSA, DSA, SHA, et cetera; otherwise they are completely independent. The term "PKI" usually only covers X.509.

It's technically possible (and often quite easy) to re-use the key material – for example, take the RSA parameters of a PGP keypair to create an X.509 certificate. But this will not make them interchangeable:

In other words, converting a PGP cert to an X.509 cert achieves nothing more than increase the security risk (due to reusing the cryptographic key instead of generating a fresh one.)

15
How, if at all, do SSH keys differ from asymmetric keys used for other purposes?