Run a CMD comand from a key stroke?

I'd like to run a certain batch when I hit some given combination of keys.

It's as simple as, when I hit, say, CTRL+D, I want to execute the command C:\scripts\run.

Is there any way to do this, perhaps with some third party software?

It has the ability to map arbitrary keystrokes to files or programs. Lots of examples, including ones very similar to what you're trying to do, in their quick start tutorial: http://www.autohotkey.com/docs/Tutorial.htm

To expand on @ckhan's answer, You can write an AutoHotkey script that uses hotkeys and the Run command. For example,

will launch C:\MyScript.bat when you press Ctrl+X.

If you don't want to use third party software, Windows offers a similar solution with shortcut (.lnk) files. You can create a shortcut to your script or executable and then define a shortcut key in the Properties dialog for the shortcut. The limitation of this approach is that not all key combinations are accepted. For example, Ctrl+X is replaced with Ctrl+Alt+X. 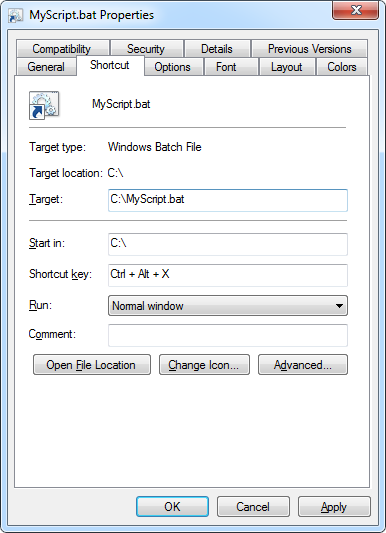 For either method, if you want to use commands without first creating a batch file, I recommend using the /c (run and close) or /k (run and keep open) flags of cmd.exe. For example, you could replace C:\MyScript.bat above with

to run the command abc.

Not the answer you're looking for?Browse other questions tagged windows command-line batch or ask your own question.

2
Turn on WiFi radio through CMD
0
Schedule a .bat file to run at a certain time/within a certain amount of minutes
0
Run other cmd in bat like from it's own path
0
Create batch File to run one time and exit comand prompt window
4
How do I interrupt a program run from CMD?
1
How can I tell whether a batch file was run from a command window?
1
CTRL+C on a file/folder, how to get the filename in a batch? (read clipboard filenames from batch)