How can I repair or install startup repair/system recovery after BCD corruption?

How should I go about repairing startup repair?

Installing startup repair onto the hard drive, as if it was not originally there, would also fix this.

In the hope that someone at a Windows-specific forum may have an idea, I've also posted this over at Microsoft Answers: http://answers.microsoft.com/en-us/windows/forum/windows_7-system/install-system-repairfix-system-repair-boot-entry/6424eada-40b7-440e-9759-e2cc67aa3e3a

When attempting to use Startup Repair, I get a screen with the status code 0xc000000e and the error message:

The boot selection failed because a required device is inaccessible.

If I rebuild the BCD (I have a backup of the semi-broken one), I no longer have a Startup Repair option.

I accidentally started my computer (two hard drives in RAID 1) in IDE mode. This caused Windows to crash on startup, obviously. The BCD store was corrupted, giving the same startup message as above, but for normal boot. In an attempt to fix this, I booted off the installation disc, getting a whole lot of errors when trying to use bootrec /rebuildbcd command:

More specifically, there were no entries on the screen to choose an OS. I eventually got around this by manually opening the BCD store (bcdedit /store C:\Boot\BCD) and correcting the device entries on {bootmgr} and {default} and the osdevice on {default}, to partition=C: for {bootmgr} (System Reserved) and partition=D: for {default}. They were listed as unknown, probably due to the failed boot attempt on IDE mode.

Now, at least, I can successfully boot... partway... into Windows. The main purpose of this question is to ask how I can restore the Startup Repair boot option, which throws an error trying to find the boot device: the same one the main boot was throwing. There is no entry in the BCD store. On my first restart into the DVD recovery environment after manual recovery, it offered to recover the on-disk recovery environment, which was reported as successful (and obviously was not).

Now, the other major problem is booting partway. Specifically, chkdsk starts every boot. After running and completing the first time, it rebooted and repeated. The drive itself is still readable, as evidenced by the partial boot and my ability to read it through the DVD based recovery environment. Safe Mode freezes on loading CLASSPNP.sys and the keyboard is unresponsive during the chkdsk countdown, which points to possible file/driver corruption. Is there anything I can/should do?

Windows Resource Protection did not find any integrity violations

My main question remains on how I can get startup repair working again. I'm hopeful that once that works I can run a system restore which may (or may not) restore possibly corrupted system binaries.

Eventually the DVD version of startup repair fixed whatever the problem was with the normal Windows boot. Unfortunately, something has changed a drive GUID or something somewhere, which means System Restore has no restore points for my current C: and D: partitions, but it does have quite a few for a C: (Missing) and D: (Missing). For a recovery tool to break when drive GUIDs change is... well, utterly useless. I wonder who designed this.

I'm quite skilled at creating walls of text. Here's the summary:

If it makes any difference, my specific OS is Windows 7 x64 Professional.

And of course, the majority of online resources deal with one of the following:

As I noted in the thread on Microsoft Answers I linked to, there was no entry for the Recovery Environment from bcdedit. There also wasn't one visible from EasyBCD. I did note they were in the registry, but they're shown by GUIDs there - not very navigable.

Thanks to this answer's suggestion of Visual BCD Editor, I was able to see the Recovery Environment entries in a friendly view. 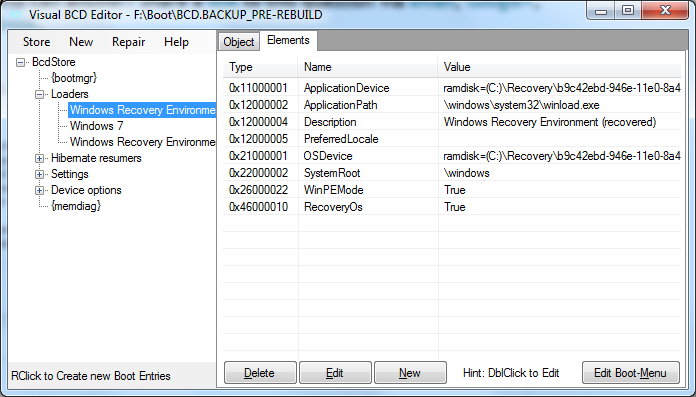 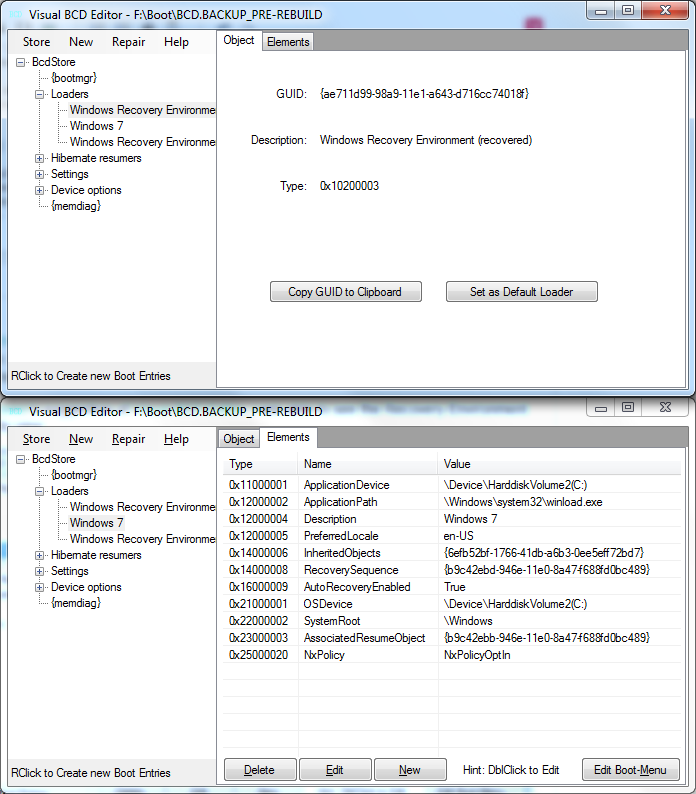 Before attempting manual repairs, backup the BCD file. This can be done under Store > Backup Store.

Unfortunately, I haven't figured out how to add a Recovery Environment to a clean BCD store. I assume it would be just adding similar options, as seen in the screenshot.