So Linux "mounts" a hard drive to perform some operation such as reading/writing. Does Windows "mount" in the same way?

Is it called something different in the context of Microsoft?

If you know Windows internals, do fix my errors, please.

"Mounting" consists of two primary parts, which are the same in both systems but their separation is somewhat different:

On Linux, the same mount() function does both jobs; a filesystem has to be mounted explicitly on a user-chosen path and remains opened as long as it is mounted on at least one path (possibly more). Once all paths to that filesystem are umount()ed, it is closed.

Windows mounts volumes automatically when the volume appears – it immediately opens the filesystem and assigns a drive letter and/or any other configured names to it.

A disk can be temporarily "dismounted" using the FSCTL_LOCK_VOLUME and/or FSCTL_DISMOUNT_VOLUME ioctl functions – for example, while running a chkdsk on it – but is automatically mounted again when the program unlocks it or exits. This behavior could be viewed as kind of opposite to Linux. Since dismounting a filesystem is temporary, it retains the assigned names even while dismounted. (The "Safely Remove" function dismounts the filesystem and disables the underlying device, to prevent Windows from seeing the filesystem and remounting it.)

A filesystem can have several names assigned to it:

diskmgmt.msc, mountvol and diskpart can manage both drive letters and mount points.

Even when a volume doesn't have any drive letters and isn't "mounted" on any folder, it remains open and its contents can still be accessed through its volume name; e.g.

mountvol.exe is the Windows equivalent. 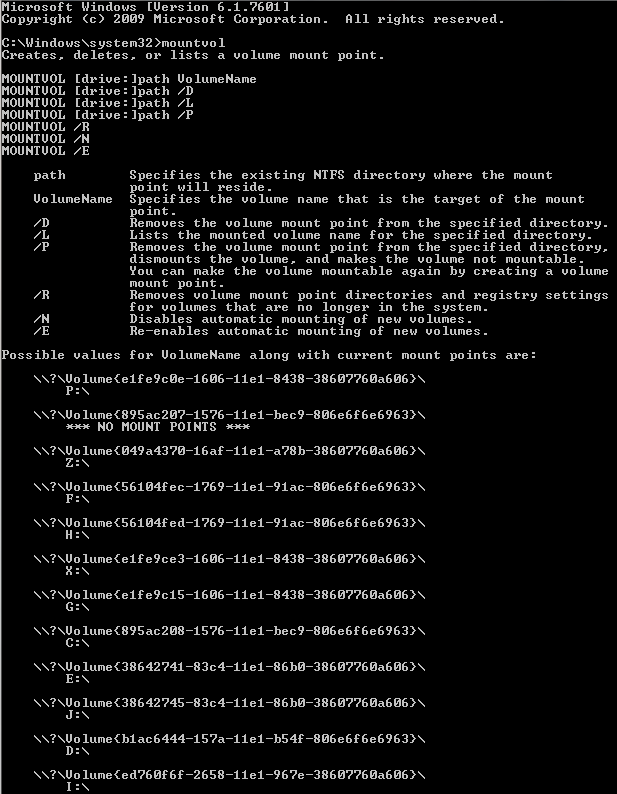 Yes, but in general, it is handled automatically (say, with a USB drive).

The Disk Management utility (part of Computer Mgmt), allows you to manipulate volumes and mount points. Explorer does the same for network shares. There are command-line versions (diskpart.exe in WIn 7) as well depending on the version of Windows you run.

The shortest, most obvious answer to fill in your _ _ _ _ _ _ is "mount". Linux mounts (and unmounts) file systems and so does Windows.

They each automate this process to varying degree depending a slew of mixed factors I'm not capable of listing, but I think caching strategies, user style/preference, and patents are significant influences on the automation of this process.

Not the answer you're looking for? Browse other questions tagged hard-drive operating-systems mount or ask your own question.