I would like to change the default action for the power button to Disconnect instead of Log Off but can't seem to do so. That way I won't have to do an extra click on the arrow to disconnect from the session.

I know that I can change the power button action locally by going to the Taskbar and Start Menu Properties dialog and changing the Power Button action in the Start Menu tab but it is disabled. 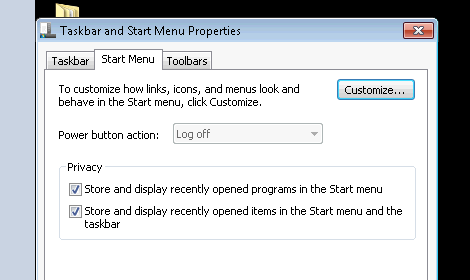 I was hoping I could change it from the local group policy editor:

but it looks like it only makes changes for when connected locally. I don't know where to look in the registry. 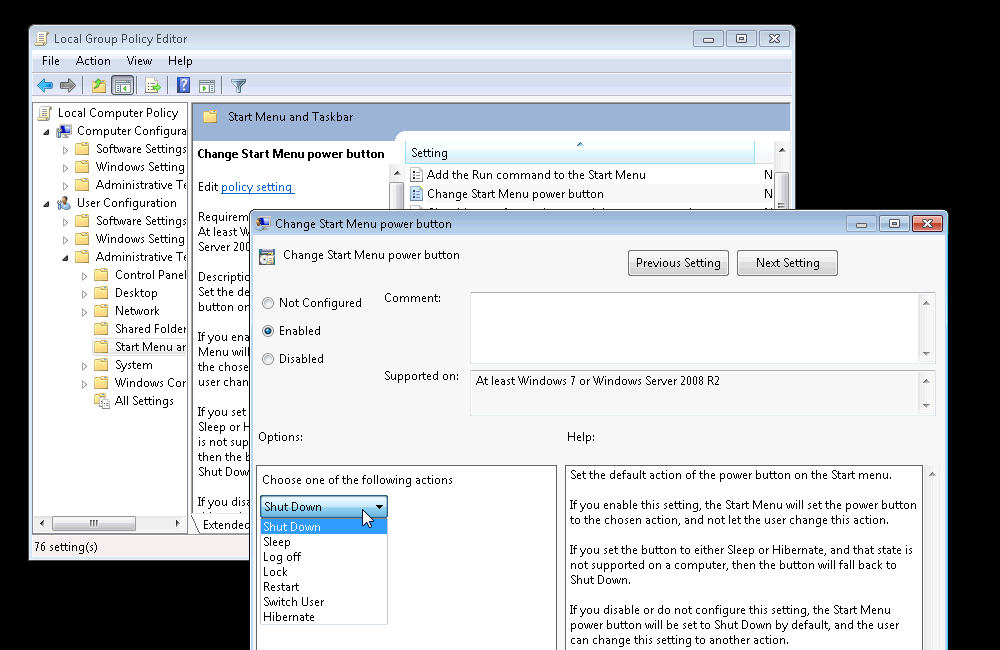 Is this button configurable for remote desktop sessions at all? Is there a policy/setting that I have to enable to be able to change this?

I would rather not have to use separate scripts just to disconnect if at all possible.

I previously was on Windows XP at work but at least then, the power button defaulted to Disconnect (instead of Shut Down) with the Log Off button right next to it so that was fine with me. I noticed that it is also disabled when remoting to my laptop (also Windows 7 Ultimate). There's a question on E-E asking about the same thing but on Windows Server 2008 and has a single response, doesn't look like it's resolved there though and I'm not going to register for that...

Instead of changing the Start menu which might also not be feasible, you could define a desktop icon that does the disconnection.

Use the tsdiscon command to disconnect the current session :

The above article is for Windows 2000 Terminal Services (!), but the tsdiscon command still exists and I suppose that it still works. When I tried it, it logged me out but left all my programs still running.

Check this key in the registry:

In the right pane of Advanced, double click on PowerButtonAction to modify it.

Type in the Hexadecimal Value data number below for the Power Button option that you want, and click on OK.

The Hibernate option will not be available unless you enable hibernate and have turned off the Hybrid sleep option in the Power Plan Settings. If you are using Hybrid sleep, then you would select Sleep from below.

See if this work?

Finally, remove your user account to connect to the server right's to shutdown the computer.

Then the only remaining option should be disconnect.

Use shutdown -i from an remote machine with Admin account if you need to shutdown or reboot it.

Not the answer you're looking for? Browse other questions tagged windows-7 remote-desktop or ask your own question.