I've got a couple of shortcuts on my desktop and on some of them I've configured the "Shortcut key" to a keyboard combination. For example I have a shortcut pointing to d:\documents\todo.txt and I've set Shift + Alt + T. This naturally opens up using notepad.

Double-clicking on the icon always opens up the text file immediately. Using the keyboard shortcut though is sometimes very (5-10 seconds) slow. Note that during that time CPU utilization does not rise.

This happens to all my machines (both old and new ultra fast boxes) in Windows XP (various versions) and Windows 7.

There are tons of questions about this but no solution.

Is there an explanation and solution to this problem?

Edit: The behavior is not consistent. I have 30 desktop shortcut and 5 of them have keyboard shortcuts assigned. I'm not interested in software alternatives for this Windows functionality. I want to know what the problem is and how to solve it.

The original question deals with Windows 7, but it's happening now for new reasons in Windows 10. Here's a general answer that deals with both situations.

There's an excellent explanation of the problem and its cause at the 2012 MSDN post Why is there sometimes a long delay between pressing a hotkey for a shortcut and opening the shortcut?

Executive summary: before launching a program via its shortcut key, Windows first polls all currently running programs and asks "Is this your shortcut key?" If so it switches focus to that window rather than spinning up a new copy of the program.

The problem happens when a window somewhere refuses to answer the question. This can be a program that's generally non-responsive for some reason, though it can also happen for other reasons (see below). Windows waits 3 seconds before muttering "jerk" under its breath and moving on to the next window to ask it the same shortcut question.

Now that you know your culprit, you get to decide: is that program worth the delay it causes? For example, Adobe Creative Cloud has sometimes caused problems for me, so I just tell it not to run when Windows starts. I can still use Illustrator etc. without it running.

If you can't live without the program, either live with the shortcut key delay or, as "user 99572 is fine" suggests, try a macro program like AutoHotKey.

Windows Action Center can also cause the delay. (This might be a problem in Windows 8 too; I skipped from 7 to 10). Whenever you see this:

Click the icon and clear the notifications, then the icon will look like this, and Action Center should no longer cause a shortcut key delay:

If a notification comes up repeatedly and you find it unhelpful, right click it and tell Windows to turn off notifications for that application.

Sometimes a background process can cause this problem too. Two in particular are:

There might be others culprits as well. The significant thing is that these are foreground applications that, for some reason, appear as background processes even though you might not have actually run them. This problem might happen with other apps, and might be limited to Metro apps (TBD).

You can use some or all of the following techniques to eliminate these processes:

After using techniques #2 and #3, these rogue background processes no longer appear on my computer.

This Windows build has introduced a new and pernicious shortcut inhibitor. As soon as you start Windows, go to task manager. You have the problem if you see Settings running as a background task:

If you kill this task, shortcut keys will be fast again, but the Settings app will reappear a while later, re-introducing the problem.

July 2020 Update on Settings: After installing Windows 10 Pro v2004 Build 19041.388 (7/2020), my computer became unstable and I had to reinstall Windows. Since doing this, "Settings" now appears as an option in Settings > Privacy > Background Apps. I don't know whether this happened because of installing Build 19041.388 or because of the subsequent reinstall. In any case, disabling Settings as a background app has (finally!) resolved the problem for me.

This 3-second timeout probably doesn't cause every keyboard shortcut delay.

One one of my laptops, whenever Adobe Creative Commons is running in background I sometimes experience a delay lasting as long as 30 seconds before launching an app. That's 10 times the timeout Window uses before giving up on a non-responsive process, so something else must be going on in this case.

If you're on Windows 10, try killing "Application Frame Host" (ApplicationFrameHost.exe). This made the delay disappear on my system.

Note that if you kill this process, it will close any modern (UWP = Universal Windows Platform) apps you have running.

My personal experience was that there was a program that was delaying Windows' handling of the hotkey. For myself it was Steam, for Andreas it was Akamai.

To diagnose which application is responsible simply close an application and try your hotkey again. Once you figure out who the culprit is, decide whether it's a service that you can deal with not running at all times.

I know this is a fairly old question, but after not finding an answer I stumbled upon the solution and felt the need to share it with the community.

The problem might have some to do with how Windows finds these shortcuts. Any reasonable person might expect that they store the shortcut data in the registry, the registry resides in RAM, and they put everything else in there. :-)

Instead the key shortcuts for .LNK and .URL are inside the shortcut itself. 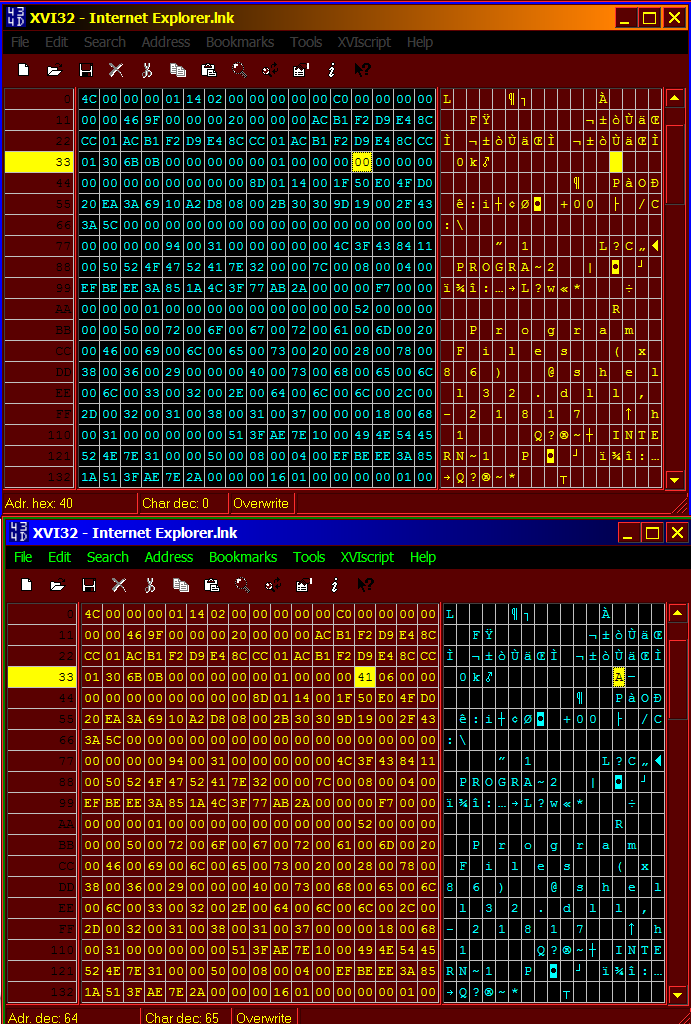 As you can see in the picture, after trying to trace down where it was in the registry (it's not), I found the change in the shortcut own data itself.

There are 2 major locations where this data is scanned from, anywhere in all of the Start menu, and via the desktop folder.

When people find that removing some program, or some web program, "fixes" the problem, maybe it has to do with items, or mappings, or some unapproved stuff in the Start menu or the desktop?

After realising the method used, it was easy enough to take the advice of using another method other than windows, to do the same things.

The Notepad shortcut method used, is going to add microbes of delay also. A shortcut to a text file itself, that will eventually open a Notepad, will get to go through a fun process. Find the class bounce around in the registry, find the associated program, open that program, and pass in that parameter.

Most program shortcuts can also have quoted parameters placed after the quoted program path "d:\documents\todo.txt". This has the computer finding the file direct without searching or guessing, and passing the file to it immediately. (The quotes are only necessary when there are spaces.)

If you want to see speed, try it as "C:\Windows\notepad.exe" "d:\documents\todo.txt" and cut out the middleman. Create the shortcut for the program instead (notepad), and add a parameter for the .TXT file into the program shortcut. OK it's like DOS now. :-) But faster.

To check the environment variables (which is only for specific issues), go to "System", and in the "System Properties", in "Advanced" bring up the "Environment Variables" and look at the mess in the PATH variable.

The culprits for me are the "Movies & TV" and "Photos" app. Once I killed this 2 apps in task manager, my keyboard shortcut launched without the 3 seconds delay. Yes, I have to kill both.

I decided to uninstall both apps since I don't need them. To learn how to uninstall built-in apps, I have followed this page successfully:-

I cannot reproduce your problem and do not remember having it on any of my computers. I do not notice any difference to opening a shortcut by clicking. I have only very few of these shortcuts, though, 2 tops.

To speed things up: You could try using a third party software for managing your shortcuts (like AutoHotkey, PhraseExpress or Clavier+ (all of which are available as aportable app). Hopefully, they will work faster. I am using them anyway and keep them on a flash drive to use on multiple computers.

As this does not happen in Safe mode, and as I myself have never encountered such a slow-down, some product that you have installed must be causing the problem.

I suggest using Autoruns to turn off startup programs in bunches, until you narrow it down to the one that is causing it.

I would also suggest, for the future, to install some security suite. There are lots of free antivirus products, as well as free anti-adware, and not having some of them is just asking for trouble, same as not locking your door at night.

I am not suggesting that your computer is infected, but that is one possibility for such a weird behavior, so full-scans using several well-known antivirus products would still be a good idea. See How to Clean An Infected Computer.

The reason for this is DDE. I don't know the specific technical details this problem generally boils down to a message queue meltdown.

Some applications are not expecting/able to handle DDE messages on an interrupt basis and so when something they ask for arrives or something is broadcasted to them they don't provide an instant response because they are not waiting on the queue. Things get backed up and everything with a dependency on DDE takes forever. In extreme cases even in command windows sometimes you can see letters you type will be lagged for the same reason.

The only way I know to avoid this problem is to avoid running certain applications over time and by trial and error you will notice when running cause delay. There might be a way to tweak things such as changing timeouts or isolation of DDE broadcast domains or tools to look into DDE but I am clueless on this topic.

I had a delay for 2 seconds, starting Notepad using Ctrl+Alt+N that I use to have as its shortcut key. The solution to get rid of the delay was to disable Akamai Netsession client.

To see if this is your problem, you can open Windows Task Manager, and select the "Netsession_win.exe", rightclik and select "End process tree". (There are two Netsession entries, one of them probabli spawning the other - selecting end process tree kills them both).

If they are quick and nice now, make the change permanent either by uninstalling Akamai NetSession Interface from Add Remove programs in the control panel, or by disabling it in msconfig (so that it doesn't start automatically).

This is how to disable it by opening msconfig:

However I'd uninstall it, and only install it again if it is needed. It's just a download agent that some companies use for downloading their software (I believe Microsoft and Adobe has used it).

This was the location of the akamai program:

Hope this will help out.

For me (Windows 10 x64) helped disabling SuperFetch feature. This service (called SysMain in Services) is causing start of the Application Frame Host process several times per day and this process is responsible for slow shortcuts.

I made a simple tool to execute hotkey shortcuts, which bypasses the Windows shell.

You can find it here: https://github.com/rustyx/myhotkey

I use it myself to rapidly start things like cmd.exe and bash.exe.

Not the answer you're looking for? Browse other questions tagged windows keyboard-shortcuts desktop shortcuts or ask your own question.

1
Speeding up explorer.exe global shortcuts
32
What keyboard shortcuts take me to the desktop if I have no Windows key?
33
Why do Windows 10 foreground apps mysteriously launch as background processes?
0
Windows hotkeys are too slow to use