Installing a regular Java plugin is IMHO a real security risk for non-IT people. Normally Java applets run in a sandbox and the applet cannot do anything harmful to your computer.

If an applet, however, needs to do something like read-only accessing your filesystem e.g. uploading an image, you have to give it more privileges. Usually that's ok but I think not everyone knows that you give the applet the same privileges to your computer as your user has! And that's everything Java asks you: 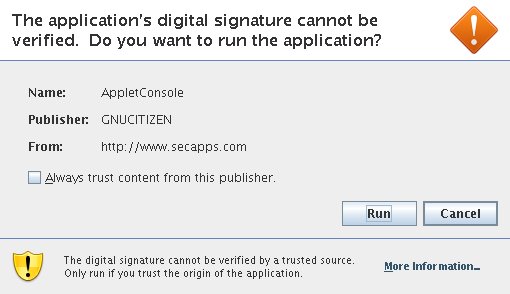 That looks as 'harmful' as a self-signed SSL certificate on a random page where no sensitive data is exchanged. The user will click on Run!

You can try that at home using JyConsole, that's Jython (Python on Java)!

or worse DON'T TYPE IN THAT CODE ON YOUR COMPUTER!!!

Does anyone know how you can disable the possibily of privilege escalation? And by the way, does anyone know why SUN displays only a dialog as harmless as the one shown above (the self-signed-SSL-certificate-dialog from Firefox 3 and above is much clearer here!)?

Live sample from my computer:

Absolutely not an official answer:

From 6u10, files can be read by applets using the java.jnlp API. The user first gets a warning dialogue (which I wish would be removed) and then a file open browser. The applet can only read the file that the user selects for it through the file chooser.

The scariness of the security dialog should roughly match that of comparable industry players, such as Microsoft's ActiveX and Adobe's AIR.

Not the answer you're looking for? Browse other questions tagged security plugins java privileges or ask your own question.