I want to estimate the health and the remaining lifetime of my hard drive using SMART (in my case gsmartcontrol). However I don't know how to interpret the attributes. More specifically:

How would you interpret the current raw values for my WD scorpio black as shown below concerning health and remaining lifetime? (I use the drive for 3 years now on a regular basis, I am not going to change the use pattern). 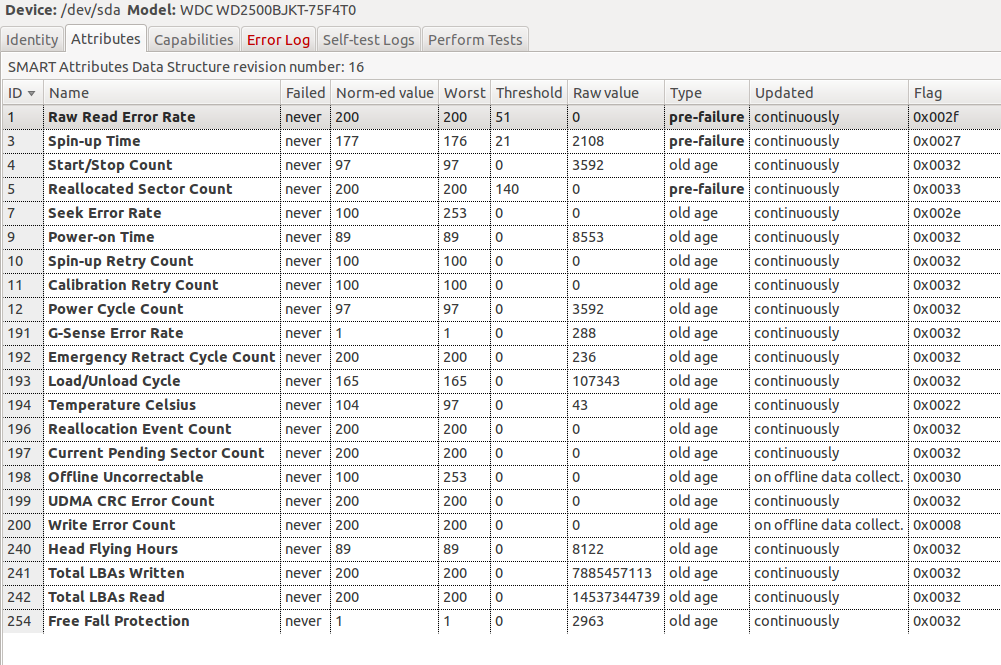 First, here's what I can tell you about your drive's health:

Some research conducted by Google indicates that drives are most likely to fail in the first 6 months, especially if under heavy use. Since your drive has survived 3 years without any signs of failure, it is likely to continue working just fine. That doesn't mean you shouldn't keep backups though, just in case ;-)

And some trivia and guesswork:

Which attributes are the most important?

The most important attribute in terms of failure rates is the Reallocated Sector Count. If it is a number greater than 0, then you drive is many times more likely to fail. The other important attribute is the Current Pending Sector Count (these can later turn into reallocated sectors). If either of these are higher than 1, then you should replace your drive as soon as possible. (source: Google research paper)

How to interpret the raw values

Raw values differ on a manufacturer by manufacturer basis. In the case of Western Digital, most of the numbers tend to be how often the specific condition has occurred. Seagate drives store some of the numbers in a different manner which results in very high raw values for some attributes. Given this, for many values (other than reallocated sector count and pending count ad other obvious count raw values) it makes more sense to look at the norm-ed value - The drive comes up with the norm-ed values, not the program, so its what the drive considers to be normal.

Are there any tables from the manufacturer where I can compare the current values with some limits?

Generally, if an attribute's normalised (or worst) value reaches the threshold or lower, then the drive is toast. (Normalized values get worse as they approach zero.)

Hard drives also have spec sheets, which list how many start/stop cycles a drive is rated for, among other things.

OK, I know this topic is rather old, but here my 2 cents:

(I'm new here so I can't answer as a comment)

highest 4 bytes 0x2529 = ??? (milliseconds maybe? the number goes up and down without changing hours, maybe is in a binary two's complement or doesn't have any relation with time)

and about Total LBAs r/w... seem to be exactly that.

Not the answer you're looking for? Browse other questions tagged hard-drive unix smart or ask your own question.