This is a very old problem I've had with utorrent since version 1.6.1 and have not found a solution all these years. I tried to tweak the caching settings (as suggested on other forums) but with no luck.

I know it's not my HDD (7200rpm, 32mb chache). Some people don't have this problem at all and their rig is similar to mine. Even the HDD is the same. What can I do?

Set uTorrent to be like this in Preferences » Advanced » Disk Cache: 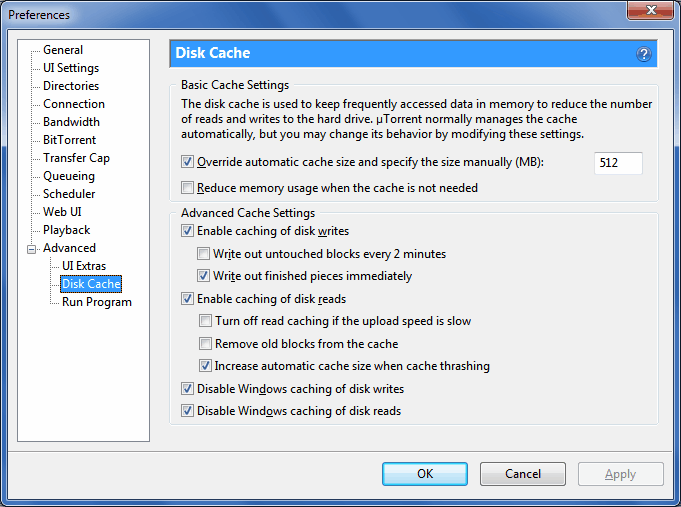 ...you will see a tick box that says 'Override automatic cache size' and specify the size manually (MB).

So if for example you have a 50Mb or 100Mb internet line which are becoming common in the western world and most seedboxes and cheap rented servers start at 100Mb you will probably want to set this value to a high number. Perhaps 512 or 1024 (512MB & 1GB respectively).

I've created the following image to show you how having this large cache makes an impact on your downloads. Remember, if the cache becomes full and your hard drive cannot keep up with the pace of incoming file pieces your downloads will slow to a crawl or stop entirely.

Now as seen in the above image having a small 32MB cache is easily filled within a few minutes. The Hard Drive here is writing out the information as fast as possible but it cannot keep up because the randomness of the incoming files is simply to high. But when we increase the cache to 1GB we are able to sustain full speed downloads for an hour or more. Again this assumes you have a pretty average & modern 1TB or larger hard drive.

...below the Override cache size setting, there is a 'Reduce memory usage when the cache is not needed' check box. You'd want to uncheck this because a full cache when seeding hundreds or thousands of torrents is very important. It reduces the chances that your Hard Drive needs to retrieve a piece from a file to seed to another user. Now don't worry, if you begin a download anything that is stored in the cache for seeding will be removed as your incoming downloads demand more of the cache space. Downloading always takes precedent over Seeding when it comes to Cache use.

Under the 'Enable caching of disk writes', there are two check boxes. [Untick 'Write out untouched blocks every 2 minutes' and tick the 'Write out finished pieces immediately' box.] Those tick boxes are very important because you don't want your disk sitting idle for the first two minutes of a download when it could be clearing out the cache for more data. Those two minutes can really help. Writing out finished pieces as soon as possible is the most desired option.

Under 'Enable caching of disk reads', you'd want to untick the box that says 'Turn off read caching if the upload speed is slow'... [This could save] your hard disk a whole bunch of extra read operations and seeded more users before others.

The option directly underneath that one is 'Remove old blocks from the cache'. Similar to the above option you want to untick this because you want the Cache to always be full. A full cache is a well utilised cache and you never know if another user is going to request the same piece of a file that you just served to someone else, save the disk some extra work.

Now although that was the last option in uTorrent 3.2.2 some of you may be using older versions of uTorrent which also include the option to disable Windows Read and Write Caching. I would suggest you to tick those and disable the Windows Caching because you've already set a very large and well utilised cache in uTorrent and it is unnecessary and problematic to also utilise the Windows Caching. In the event that your PC were to crash for example Windows may still be holding over 1 GB of file pieces that uTorrent considered already written to disk and when you open your client again you'll find that some downloads didn't get completely saved to disk and will need to be checked for missing pieces.

I fixed uTorrent 2.2.1 by selecting Pre-allocate all files in Preference -> General. Might work for other versions as well but I haven't tested.

Disk Overloaded 100% means that the writing blocked. This can easily happen with a slow/busy disk, since the complete I/O is single threaded in uTorrent 3.1.3.

Disk I/O system completely rewritten. Now multi-threaded and high performance. It will take advantage of multiple disks, perform better with even just one, and no one disk job can block everything (e.g slow network blocking local I/O, or allocating files)

It may not may not work well enough to use it (it's an alpha, after all), but at least you'll know if your problem will get fixed soon.

If it doesn't, consider using a different BitTorrent client. In my experience, Deluge works quite well for high speed downloads.

You're getting disk overload errors because torrents upload and download pieces non-sequentially. Unlike a local file transfer, your drive is having to read and write hundreds of random parts of the file(s) all the time.

To fix this, you can manually override the disk cache size and/or lower the maximum number of peers allowed to connect.

I tried many, many different things before I finally found something that fixed the "Disk Overloaded 100%" issue for me.

I'm running Windows 7, uTorrent 3.2.3. (it's happened for me with the last several versions of uTorrent as well).

I fixed it by bumping up cache to 1GB. It seems to have this problem only on large torrents with many files, over 30, in my case. Problem is that disk needs to write blocks to many different locations and it gets too busy. If cache is big enough it will optimize writes to make it more sequential....

Not the answer you're looking for? Browse other questions tagged windows-7 utorrent or ask your own question.