I created a wim image that we are planning to deploy to some of our computers, but when I image a computer with it from a flash drive it continually reports that the BOOTMGR is missing (and no, it's not booting off the flash drive).

I'm able to resolve this by running Windows Startup Repair, but I would rather just add whatever command is resolving the issue to a script that runs after the image. I've already tried running fixmbr, fixboot, rebuildbcd and nt60, but none of those resolve the issue.

Basically, I would like to know what exactly is being done when I run Windows Startup Repair.

One thing you can do is click on the link that says "Click here for diagnostic and repair details", just before you are being asked to restart the system, so that the repairs are done. 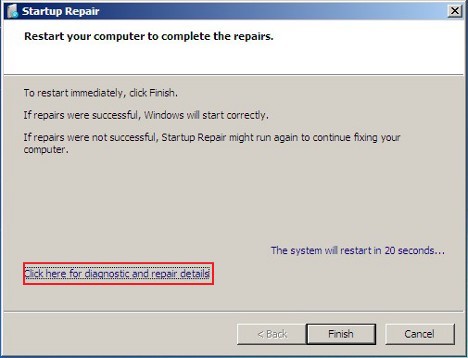 This will show you a log of the changes/repairs done, depending on the problems that were found. The things done by startup repair vary depending on your actual problems.

In the image below you can see an example of a problem found by Startup Repair. 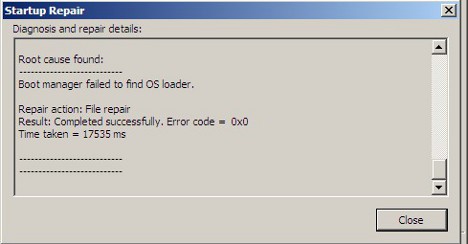 Every time you apply a wim image(with imagex tool) to a disk or partition you must add boot entries(Windows BCD entries) manually. To do this, you should boot the computer with a WinPE disk and run the following command on the partition that you applied the wim:

where X is the unit that you applied the image. You are able to see what is the X value by running:

If you applied the image to a different drive (typically c:) you'll want to run

And then run the command

To scan for installations and add them to the boot manager.