For many years I have blocked popup ads with AdBlock Plus.

But it seems more and more these past couple months there is a "new" kind of popup overtaking the web. They are javascript based "modal" popups which ABP is powerless over. See attached for an example.

Is there a way to kill these ads without breaking the functionality of anything I need? 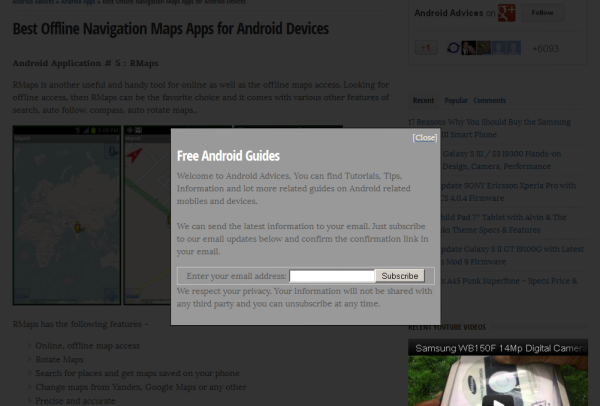 The problem is although it appears as if it is a pop up, it is actually just HTML giving the impression it's a pop up. It is often called an overlay. Meaning on some sites, it will be junk (as per the screen shot), but other sites very much required (like a shopping basket preview screen).

Whilst it may block adverts it is possible it could block useful things, such as a discount pop up or cookie policy notifications, which until agreed won't let you proceed.

For FireFox and Chrome, there is a plugin called BehindTheOverlay which may give you what you want (similar to AdBlocker but for overlay). Chrome also has an extra plugin called overlay blocker. It is not perfect for many reasons and as already mentioned, do it at your own risk (as it may stop some sites working as intended).

Lastly, AdBlock plus may be able to help as it can be customised, see this forum for more detail https://adblockplus.org/forum/viewtopic.php?t=18595

You also have the option of disabling JavaScript. I know this is unlikely to suffice, but it's still an option.

You might take a look at the NoScript plugin. It is a bit more convenient than global disable of javascript.

Take a look at the Overlay Blocker chrome extension. It stops these popups automatically now and no longer breaks pages.

Not the answer you're looking for? Browse other questions tagged firefox internet popups or ask your own question.

9
Is there any way to block javascript pop-overs in Firefox or Chrome?
4
How to block ads/pop-ups that gray out screen and show advertisment?
1
How do you block the latest popups (not sure if they're FLASH based, etc.)
2
How can I block these windows that appear in web pages when scolling down?
3
How to block all in-page pop-ups?
2
Are there any maintained blocklists for modal website popups?
0
How do I stop ads in my browsers?

5
Firefox popup blocker filtering exceptions
2
How to view a page's source when a javascript modal popup loads first?
3
How to have any popup in firefox open as a tab instead
3
Completely disable popup blocker on one site
14
How to disable popup messages in Windows 8?
0
How to reduce annoyances on websites visited? Already using Ghostery and Adblock
0
How can I prevent Firefox from blocking popup pages?
0
How to block ad popups in web browser?
0
Firefox browser randomly clicks on links when moving mouse over them
0
How to remove ad script malware injection on Firefox