Can a full pagefile slow down my PC?

I was working on a company computer, trying to figure out what was wrong with it, why it was running so slow. I started running a chkdsk Friday afternoon, and it took almost an hour just to get to 2% on the first step. So I start thinking, maybe it was a faulty hard drive.

When I came to work this morning to look at the computer, the chkdsk had been finished and I was at the normal logon screen for Windows 7. I clicked on "switch user" and logged on as administrator. It took the PC at least 5 minutes to get from the "Welcome" screen to where I could see the desktop.

The computer is brand new, only a couple months old. On a side note, I did bump up the size for the pagefile and once I restarted the computer, it started running faster.

EDIT: @Mortie -> Here is the screenshot you were looking for on the HDTune 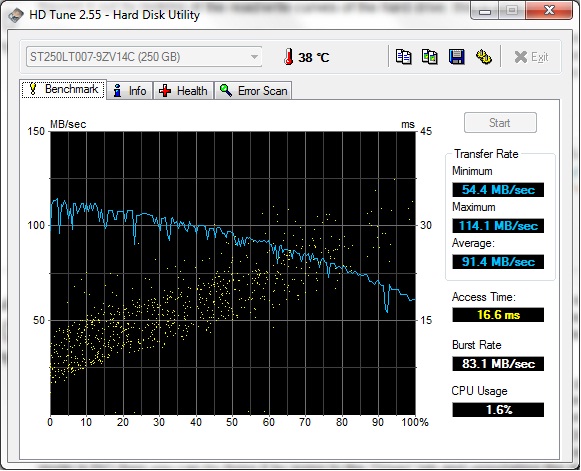 How much RAM does the machine have?

The page file in Windows-based operating systems is a special file that acts as a sort of "scratch pad" to store modified pages that are still in use by some process. So, in simplistic terms, the page file is used by Windows to hold temporary data which is swapped in and out of physical memory in order to provide a larger virtual memory set.

A cheaper way to potentially improve performance would be to use a fast SD or USB drive to enable Readyboost in Windows 7. It would be better to resolve the root of the issue, though.

For that, I'd look at the RAM first. You say it's a company computer, so have them buy some more RAM for the machine if all of the installed RAM is currently being recognized.

Can a full pagefile slow down my PC?

The body of the question aside, to answer just the title; yes and no.

No, it will not be slower than when it is for example "half-full". Using the pagefile at all will mean disk access which of course is slower than physical RAM, but the amount of pagefile use does not make it slower. (That said, theoretically, if the pagefile is contiguous for, say, 90% then becomes heavily fragmented, then yes, it would become slower when you start having to use the upper parts of the file.)

On the other hand (and more importantly), if your pagefile is "full" then you have completely run out of all forms of memory both physical and virtual. At that point, Windows will give you a warning about being out of space and that programs may not be able to allocate memory (this is a different warning than the one below that tells you that Windows is expanding the pagefile and that some memory allocations may not be fulfilled during the process). This will often be followed shortly by programs starting to crash (not just new programs, but even existing programs, depending on their nature). At some point this could take the system down and require a reboot, which of course slows everything down. 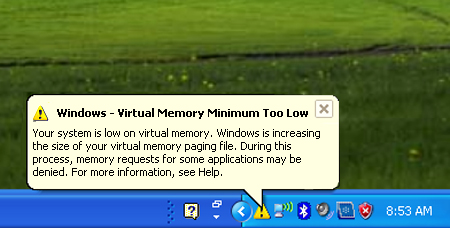 In regards to the actual problem, it sounds like the system was simply paging back in all/most of the data from the swapfile to physical RAM when you used the system. This can take a while. By increasing the pagefile, you made it so that less data has to be paged, but even so, Windows has a tendency to swap out memory from idle programs regardless. This question had a different cause, but similar symptoms.

I had several computers that were showing a full or nearly full pagefile (according to the All CPU meter gadget). One of the computers became excessively slow (Pentium D, small disk), and one machine had a full pagefile with no programs running at all. In all of them shutdown took ages as Windows zeroed out the pagefile.

I spent some time looking into this but none of the web pages where this question was asked seems to have come up with a solution. Finally last week as I was checking that Windows 7 was properly configured for SSDs did I run across the answer. Windows is filling the page file because of superfetch. Slow computers with a small page file can become glacial and unusable.

You can fix this by disabling superfetch. You'll find directions on how to disable it in most setup lists for SSDs. These pages also suggest disabling prefetch, but if you don't have an SSD this will really slow down program load times. Disable superfetch only, reboot and you should see a mostly unused page file. My 2GB Pentium D still shows some page file useage, but it has little memory and a small pagefile (this disk is too small to make it larger), but the computer is much more responsive now.

Offcourse pagefile.sys somewhat effects the performance of a machine (read here and here), also it has large impact if you are on windows-7 pc, since, it causes large dumps that is carried by the pagefile.

But the effect is not as much as you are considering it, because the other issues like amount and frequency of RAM, clocking speed of your machine's processor, start-up processes have much more effect than pagefile.

I will recommend you to check the Windows Experience Index, so that you can be able to collect information about most of important devices and there performances, also I would get one more point of you:

I did bump up the size for the pagefile and once I restarted the computer, it started running faster.

Here a restart can cause several other setups and cleanups for you also, so do not belive in increase pagefile size as performance issue readily.

As a last note, since:

the computer is brand new, only a couple months old

It must be in guarantee, so if problem persists just go and get your rights.. :)

I still think that it is something with the hard disk causing the problem... I had the same problem and I figured it out by looking at the read/write curves of the hard drive. this is what I did:

1.download HD tune (http://www.hdtune.com/) you can also use the free trial 2.benchmark the hard drive (read and write) and let it finish drawing the curves. 3.have a close look at those curves... if there is too many big shiftings from a high value to a low value and it is repeated in all the process then you have a faulty HDD. the curves should repeatedly zigzag smoothly on a continues curve.

post the curves here if you have problems with analyzing them ;)

You can use Task Manager to see how much page is being used and which process is using it. Look under the 'Performance' tab for a general feeling ('available' physical memory is the key, not 'free'). If that's not detailed enough, click on the Resource Monitor button on that page and take a look at memory usage under the 'memory' tab.

Another, fairly rare problem that I've seen is characterized by the drive light being on pretty continuously and the system slowing almost to a halt. This occurs when, for some reason, the system decides to switch the hard drive/controller mode from 'Ultra DMA' to 'PIO' mode (usually after seeing an error in DMA mode). You can check this by going to the Device Manager and looking at the IDE ATA/ATAPI controller tab. Double click on the appropriate ATA controller and look under 'Advanced Settings'. If the mode is PIO then you can try fixing it by going to the 'Driver' tab and uninstalling the driver. Once that's done, click OK, close your windows and reboot. The system should reinstall the correct DMA driver.

Not the answer you're looking for? Browse other questions tagged windows-7 pagefile or ask your own question.

7
What happens when Windows 7 system runs out of physical AND pagefile memory?
2
Why can't my computer speed up again after closing large applications?