I have a computer monitor that is approximately 23" in size. Its native resolution is 1920x1080, and Windows 7 will not allow it to be any higher. However, I cannot make the resolution a little lower as well. When I right-click on my desktop and select 'Screen resolution,' the vertical slider has only two options: 1920x1080 and 1280x720.

My graphics card is ATI Radeon HD 5450 and it has the latest graphics drivers installed. I've tried playing around with the AMD VISION Engine Control Center to see if I can change an option to make the image clearer, but I had no luck. I did find one odd thing, though. When I lowered the refresh rate from 60Hz to 50Hz, the image kind of "zoomed in" but it also became perfectly clear like I would expect it to look. The problem is that when I use 50Hz, the image zooms in a little on the center and I lose maybe an inch and a half of the screen (I do not see the bar at the top of applications, I do not see the Windows taskbar thing, etc). I figured if I could somehow zoom in so that the entire image fills the screen (not the slightly cropped version) then I would have the perfectly crisp image of 50Hz, and also the uncropped image of 60Hz. However, upon zooming in, the image began to look blurry again just like it did with 60Hz.

So I am at a loss here. I do not know how to make the image look as clear as it should. I have the latest drivers (I updated them today) and I know that my monitor supports the resolution that I am trying to use.

Has anybody experienced something like this before? I'd really appreciate any input - thanks!

Update: I have figured out how to make the display look crisp! I set it to the 50Hz option, and then I changed the scaling through the monitor itself, rather than software.

Now, however, I am finding that games look pretty bad because since it is clear, the lower quality really becomes apparent. I cannot run new games at 1080p, so I run them at the lowest resolution possible (1280x720, since it is the only other option offered, as I have mentioned). So I am wondering, is there a way to have Windows display more resolution options?

Is your monitor connected through a VGA cable? Try to calibrate it.

It's possible you just have a duff monitor with firmware that's not interacting well with your graphics cared. One thing you might like to try though is "Control Panel -> Display -> Adjust ClearType text". You may find that turning on ClearType (if not already on) and going through calibration makes things better. If not, you might want to try turning ClearType off.

If you have an AMD RADION Graphics Card you may need to adjust the Over scan/scaling options via the AMD Catalyst Control Center, this is what gave me the crisp and clean resolution I was after. 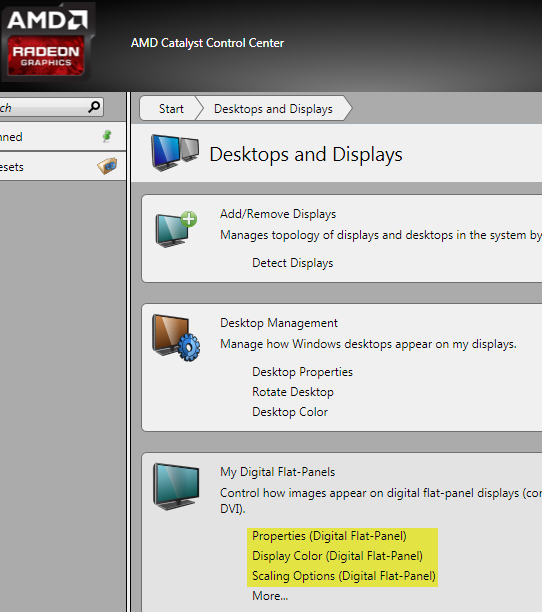 I had a problem like that once. After doing some troubleshooting, I discovered that the problem was the cable connecting the display to the computer. I guess it was damaged somehow. Try another cable if you have one.

I found a link that addresses this problem:
http://www.tomshardware.co.uk/answers/id-2313963/blurry-text-hdmi.html

There is this thing called "EDID information" that the monitor is supposed to send to the graphic card to tell it all the parameters needed for proper image display. If the EDID is broken, the image will look bad. They suggest to use utilities such as AMDEDIDUtility to copy the EDID information from a working port (for instance DVI or VGA) and use it to override the wrong EDID provided from the HDMI port.

Not the answer you're looking for? Browse other questions tagged windows-7 display resolution graphics or ask your own question.