Is there a program that can determine the highest pitch within an audio file?

Is there a Windows program that can determine the "highest sound wave frequency" found within an audio file (e.g. mp3 file)?

For example, it should be able to analyze the file Dog-Whistle-0 and determine that the highest frequency found within the file is roughly ~12000 Hz.

Also, it should be able to analyze Piano.mp3 and determine the highest note.

Load it, and load the tuneR and seewave libraries (install them from the package manager if not installed yet).

Then, load your MP3 or WAV file:

Now, let's plot the spectrum and its peaks: 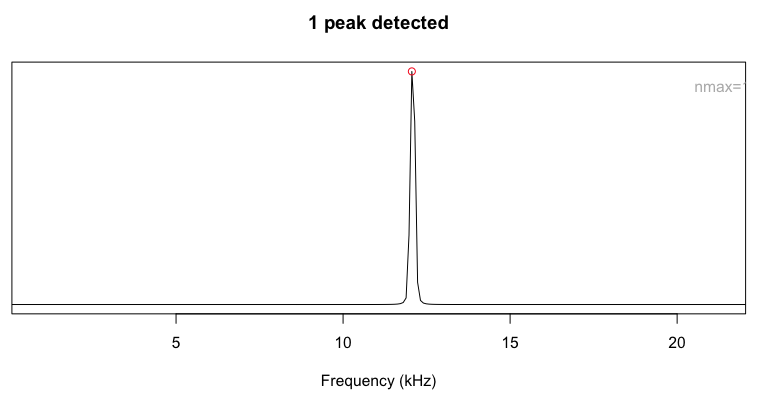 The above only works with non-musical data. When you analyze frequencies of music, you'll find that the highest frequencies will always be around 12-20 kHz, depending on the instrument(s) involved. However, this highest frequency will not give you an estimate of the note that's being played, since a musical note, when played by an instrument, will be composed of multiple frequencies.

This is the so-called "timbre" of an instrument, and you'll find that that an A at 440 Hz by a flute will include different frequency components as compared to an A played by an electric guitar.

Your best bet is to run a dominant frequency analysis by looking at the frequency peaks over sliding time windows, and check where the highest one occurs.

There's no such thing as "frequency over time" though. You can only plot the average (or dominant) frequency over certain sliding time windows. Seewave offers quite a few functions regarding selecting windows of time, but it gets rather complicated.

to get the spectrum properties from 10 to 11 seconds and then call s$centroid or s$mean to get the centroid or mean frequencies of that particular time window (although 1 second is quite large for audio analysis).

If your Wave file uses 44.1 kHz sampling, you could downsample it to reduce the computation effort, e.g. to 16 kHz.

But remember that according to the Nyquist Theorem, the maximum frequency that can be represented now is 8 kHz.

You could also look for a pitch detection software. Like this one, which requires MATLAB though.

Have you tried Audacity? It is a freeware tool that has some fairly sophisticated analysis tools, including a Plot Spectrum command accessed from Analyse -> Plot Spectrum.... 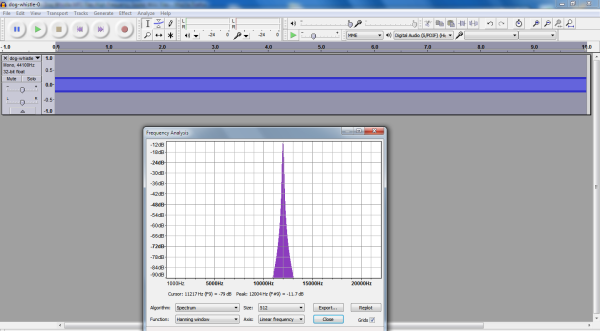 Note that you get different results with the MP3 version of the file compared to the WAV version because the MP3 compression has altered the waveform and introduced artifacts/aliasing.

Edit: Those sound files you link to are not good examples for this. The higher frequency files are only sampled at 44.1KHz which is tailored to human hearing (around 20KHz max). You can't represent ultrasound frequencies without increasing the sample rate.

Not the answer you're looking for? Browse other questions tagged windows audio or ask your own question.

0
Program for capturing audio as an audio file
4
How to play a soundless video and add a audio file at the same time?
8
How to objectively compare the sound quality of two files?
1
How can I join multiple wav/flac/audio cds into one master big audio file (>4gb)
3
Is there a Windows equivalent to the Linux “aplay” that will accept a bitstream and output audio?
0
Why does splitting a large audio file into many smaller audio files make the total size smaller?
1
How can I “record” sound directly from an audio file?