How do I find what's eating up all of my system's memory? (not SuperFetch)

How does one diagnose/discover memory-related problems, if Task Manager appears to not be reporting correctly?

I must have a memory leak or something -- I'm at 75% usage of my 12 GB of memory, but Task Managers listings of processes' memory usage isn't adding up (yes, "Show processes from all users" is checked).

It seems like this "phantom" memory usage grows in relation to how long the system's been up. It shows that there are 118 total processes. Besides the top 5, all of them are under 50 MB.

How in the world can I find what's using up the rest of my memory? It seems as if Task Manager isn't seeing everything that's being used. Perhaps there's some kind of memory leak? Or program's aren't releasing used memory properly? 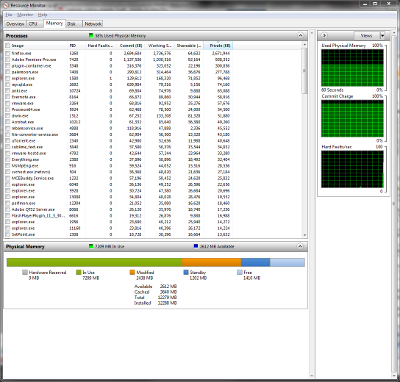 You can usually gain better insight into what is using up your memory with tools like RamMap.

Often, the memory can be used up by memory mapped files that have been pulled into RAM to increase performance.

Take note of the Active column in RamMap. That is the memory that is actually currently being utilized. Indicators regarding free memory can often be misleading. This includes Windows tools like Task Manager.

I also wanted to address some additional points from your question.

However, when I see my memory usage nearly used to peak capacity, it's stopping me from running/loading subsequent programs (from my own concern), and even sends me to task to close many down (with hardly much effect on decreasing memory usage, at least noticeably and within short time period).

Your reasoning is perfectly fine. But, unless you're experiencing issues due to low memory situations, you should refrain from this practice. The operating system should handle this task and flush data out to the paging file when physical memory is required.

Possibly, you're also using the wrong indicator for your practice. You want to have an eye on your Commit Charge (Process Explorer terminology). 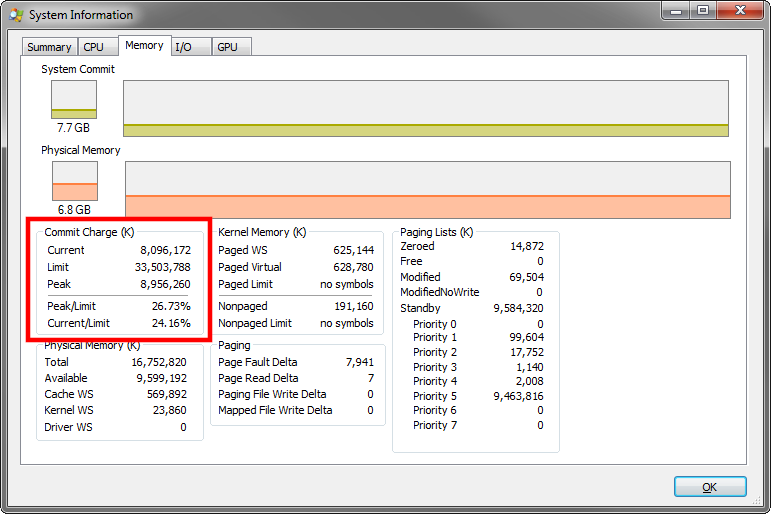 The commit charge is the sum of all used memory. You can see in the screenshot, there is also a limit to it. That limit is the size of my physical memory + the size of my paging file. If that limit was to be hit, that would be an issue.

Which brings us to our next topic.

When the memory fills up, I hate seeing the 1GB page file on my SSD expand to the 6GB limit I've set, and me "sweating" with the knowledge that my "poor" SSD is likely being ground down to dust as Windows heavily/rampantly turns to using it as a full-fledged memory stick. (On that note, should I just hard-cap the page file to a statci 1GB?)

In my opinion, there are several things wrong here. In general, it should be strongly discouraged to set limits on the size of the paging file. Mark Russinovich explains this in the videos I linked above (much better than I ever could).

Only bad things can come from that. What is Windows supposed to do when it needs to flush out more than 6GB of data to the paging file but you capped it at 6GB? That is a major issue.

Let Windows handle the paging file. The only thing I would strongly advise you to do, is moving the paging file away from your SSD. Tom Wijsman explains this excellently in his blog post Maximizing the lifetime of your SSD, which I recommend you to read.

In my case the reason for high memory usage was a hyper-v virtual machine for which I had Dynamic Memory settings enabled for RAM.

RamMap tool helped me to locate the root cause.

First, I noticed in RamMap that Driver Locked consumed more then 29GB out of my 32GB RAM. Then, I found some article that explained that Driver Locked high memory usage can be caused by the HyperV Dynamic Memory enabled, and then I just confirmed that.

Moreover Windows Update was constantly slowing down the system in process of updating that huge file.

That may be a common problem for many lower-end PCs.

If you see the snap is not showing all the process and the shown process itself taking 5.8 GB Memory. from the shown snap it show that there are a lot unnecessary background program are running. Using msconfig remove the unnecessary startup programs and also increase your virtual memory (1.5 times of your physical memory).

You can try Sysinternal's RAMMAP but it shows memory usage in a different way than Task Manager & Resource Manager and is therefore not too helpful.

Task Manager & Resource Monitor don't show the filecache and the size of it. It's part of the "In use" part of the memory (See Resource Monitor). The file cache can grow to a VERY large size, especially when one keeps the computer running for hours. Overall program memory usage goes up as time goes by, as a result of a growing file cache & memory leaks. Some programs simply have a lousy memory management.

One way to minimize memory usage is reducing the amount of processes. (Why are 118 processes running ? Why do you have multiple instances of Explorer.exe running ?)

There's a program that helps you to regularly reduce memory usage & regularly collapse the file cache. (PcWinTech's CLEANMEM). Reducing memory usage this way also reduces or even eliminates the need for Windows to write data form the memory to the swapfile (on your SSD). So, it increases the lifespan of your SSD. Reducing memory usage also makes more "Standby" memory available, allowing Windows to preload more files in the Standby memory, speeding up your system.

Not the answer you're looking for? Browse other questions tagged windows memory troubleshooting or ask your own question.

6
100% of RAM is used when the Task Manager shows a cumulative usage of - what should be - less than 12%
1
How to find what's using up my RAM under Windows 7?
1
How do I precisely analyse the memory usage in Windows 7?
1
How do I find what's eating up all of my system's memory?
34
PC Boots then writes giant datastore.edb file slowing the computer down
6
Discrepancy between memory in use reported by the task manager and memory used by programs
2
Tool for viewing used and free memory on windows system
0
Lenovo Ideacentre 3 always uses on average above 70% ram (even after an upgrade from 4 Go ram to 8 Go
0
Extreamly high memory usage in windows 10, and no clue as to why
-2
Why is there the Installed Memory: 4.00 GB & Available Memory ONLY: 536 MB - 2.20 GB
See more linked questions

2
Force Windows 7 to unload items from memory (not Superfetch)
3
How to measure memory usage by certain programs accurately from the command line on Windows?
1
How to detect and troubleshoot memory leaks in Windows 10?
2
High memory usage not showing up in Task Manager
0
How can I see the current memory usage of a VirtualBox VM on Windows?