Why does performance of a regular hard drive decrease over the duration of a benchmark while SSD doesn't?

I use HD Tune to measure performance of the hard drive. The tests typically take 2-3 minutes and the transfer rate of a regular hard drive decreases dramatically as the test comes to a close. 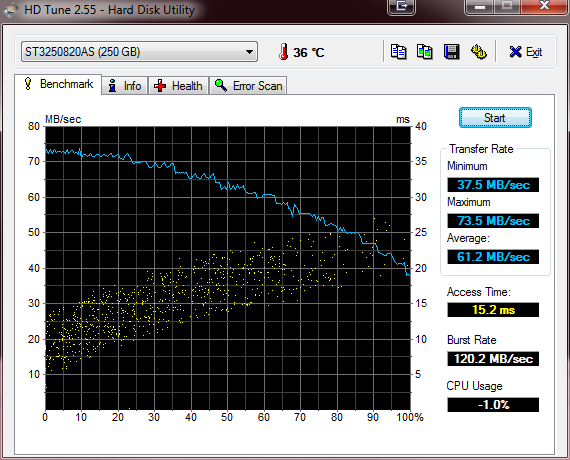 However, the SSD drive performance stays the same over (pic below) the life of the test. This happens on all my computers. Why is that? 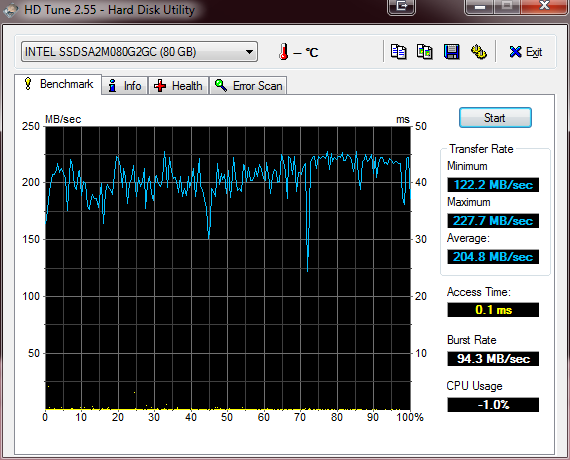 The mechanical HD is being scanned from the outside inward. Since the disk is spinning at a constant 7200rpm, it's covering more data per second at the outside than the inside.

Your HDD performance does not decrease over time, but it decreases due to the physical effect caused by the 'rotational effect" of your disk(this doesn't happen on your SSD). The fist 0-10% area of your hard disk corresponds to the external area of the disk, which gives the read speed a boost because the linear speed of this area is higher compared to the internal area of your disk(the last 90-100% of your disk for example). This gives the impression that the performance of your hard disk is decreasing over the first to the last disk sectors(it actually is, as you can see on the first picture), as all SSDs are based on random access memories, all the usable "area" of your SSD have the same speed and accessing times, which corresponds to a linear performance over the entire disk. This also explains why operational systems usually use the first "area" and the first disk sections of the hard disks... For example, Windows will boot faster and make disk I/Os better than it would be if it was intalled on the last sectors.

PS: As you can see on your first picture, Hard Disks usually have a 40 to 50 percent performance loss when comparing the first sector to the last sector reading speed. 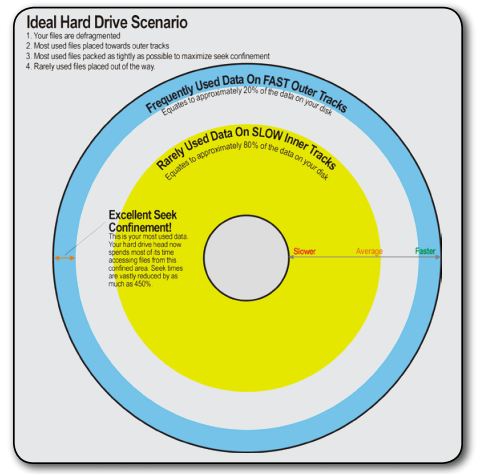 Nice answers above, but there is little notion of angular size of a sector on outer cylinder vs inner cylinder.

The Answer: zoned bit recording (ZBR) is the cause. Because inner tracks have sectors with larger angular size, so they take longer time to read while disk makes a turn under the head with constant angular velocity (rpm). 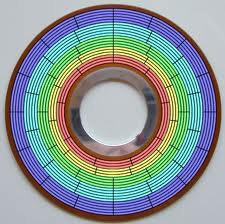 ... All the tracks within a given zone had the same number of sectors. A track in a zone near the outer diameter of the disk, however, might have 50 percent more sectors than a track in a zone near the inner diameter of the same disk. This would be true for a 3.5-inch drive. The advantage ZBR provides varies by media size and is a function of the relative size of the outer radius of the recording band to the inner. Drives today usually have 15 to 25 zones. ZBR added great value: 25 percent or more capacity for no additional material cost in a 5.25-inch drive, the prevailing form factor when ZBR fi rst appeared. It forced the industry to adopt a more intelligent interface—one that would hide the complexities of ZBR and, at the same time, hide the geometry and bad-block fl aw problems by pulling that functionality into the drive, as well. ...

Your hard disk spins at a constant rate, 7200RPM or whatever. the benchmark begins on the outside of the disk, where the radius is greater, and thus the linear speed is faster(one rotation in 1/120 of a second has greater distance (proportional to radius), and therefore more bits read in that time period), while inside the disk, the radius is smaller, and so less bits are read for the same angular distance(one rotation in 1/120 of a sec with smaller radius implies smaller circumference swept and thus less bits read.

Assuming an outside radius of about 2.8 in, and an inner radius of 1.6 in(due to loss for spindle, extra alignment space, landing zones), the performance loss on the inside is about a factor of 1.8.

Note that the jitter is caused by system load jitter or noise on cables, among other factors.

Also, addressing the SSD and not just the hard disk, is has an electronically network of connections set up(not mechanical) and thus the only delays are wire(in the actual memory) latency, and access "sweeps" across the data in blocks, keeping the velocity and bitrate constant, limited only by circuitry.

Not the answer you're looking for? Browse other questions tagged windows-7 hard-drive ssd or ask your own question.

0
HDD I/O fast at first but gradually decreases?
2
Only 60 MB/s transfer rate from WD Green hard disk?
2
how to partition a harddrive for optimal performance?
0
Does one partition get a performance boost over another ?