How do I troubleshoot a slow hard drive?

My computer is suffering of slow-downs and I'm not surprised (it's around 6 years old). Here's what I've verified:

Because of the above, I am already 70% sure the problem is with the hard drive. Before I replace it, however, I want to rule out other less likely possibilities (such as RAM, software, or PSU).

I don't have the money to replace the entire box right now, but I can easily replace one of the components.

I've read several questions (such as this one) which give general guidance on troubleshooting an unknown issue, that is not what I'm looking for here.

My main question is:
What tests or benchmarks can I run to verify I have a problematic hard drive?
I don't need to solve this problem, I am content with just making sure it's the hard drive.

I could borrow a newer hard drive from a friend and see if it gets better. A positive result would rule out all other components, but it wouldn't rule out a software issue (since this new hard drive won't have any of the software I use daily).

You can view S.M.A.R.T. attributes on Windows using third-party tools such as GSmartControl.

On macOS, you can use Disk Utility, though it isn't very verbose. You can install smartctl from the package smartmontools to access the S.M.A.R.T. attributes using the command line.

On Linux, the command smartctl -a /dev/hda (from the package smartmontools) gives S.M.A.R.T. information about a hard drive, where /dev/hda is replaced with the device in question. GNOME Disks (gnome-disks from the package gnome-disk-utility, previously known as palimpsest) is a graphical utility that can give some more advice about the condition of your hard drive. 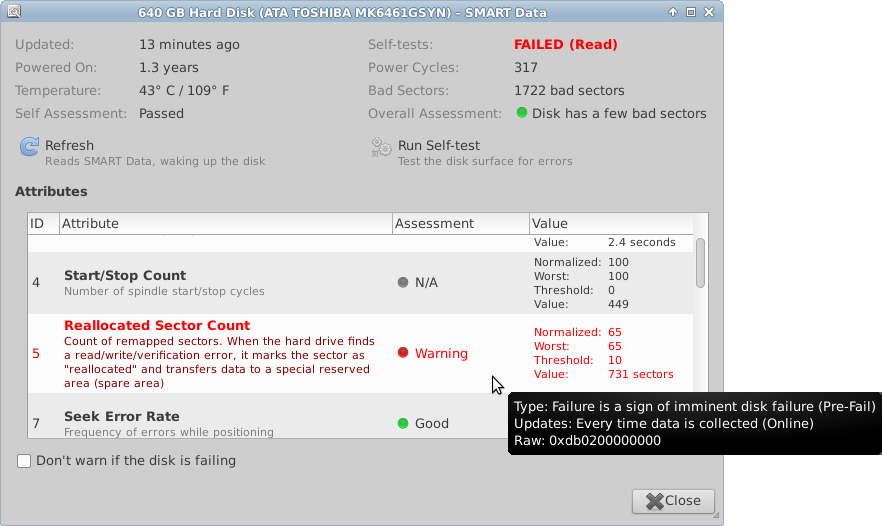 Here are some attributes that are relevant and worth noting. A larger list can be found here.

A non-zero Read Error Rate (ID 1) indicates a problem with either the disk surface or the read/write heads.

The Throughput Performance (ID 2) is the average efficiency of the disk. If the value drops below the threshold, something may be wrong with the disk.

A high Spin-Up Time (ID 3) (recorded in milliseconds) may indicate that the hard drive is having trouble spinning up.

An increasing Reallocated Sectors Count (ID 5) means that areas on the hard drive are failing in integrity, and data had to be moved. This causes performance decreases when sectors are being remapped, but it may be more serious in that the hard drive is about to fail.

A low Seek Time Performance (ID 8) is a sign of a mechanical issue with the magnetic heads.

The Spin Retry Count (ID 10) goes up when a spin-up fails. If this happens, input/output operations are queued until the hard drive can spin normally, which causes slowdowns. More importantly, though, if the hard drive has to retry spinning up, it's a sign of imminent failure.

A non-zero Reported Uncorrectable Errors (ID 187) count means that that number of sectors could not be corrected by hardware error correction. Here's a sign of old age.

The Current Pending Sector Count (ID 197) is the number of sectors waiting to be remapped. This indicates old age of the hard drive. 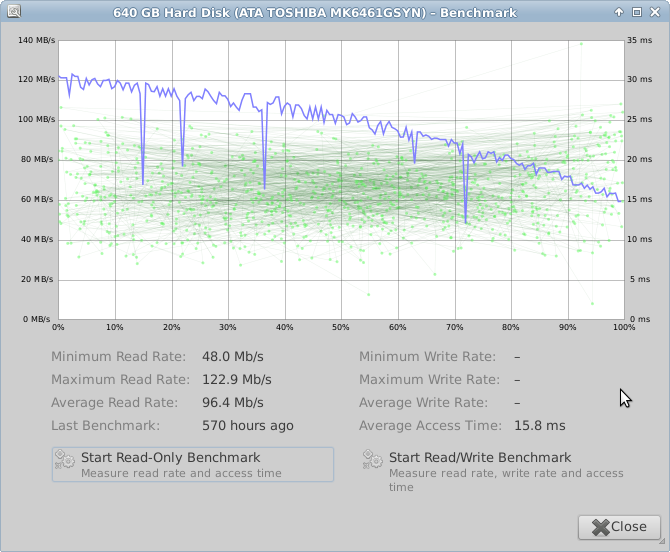 If there's a certain location in the hard drive that is getting poor performance (maybe where frequently used information is stored), hard drive read benchmarks can help confirm this. Above is a screenshot of a hard drive benchmark using palimpsest, now known as GNOME Disks (gnome-disks).

If you prefer to do command line benchmarks on Linux, you can combine multiple options:

On Windows, you can use tools like HD Tune to do hard drive benchmarks.

On macOS, you can use tools like Blackmagic Disk Speed Test to do hard drive benchmarks.

Another way you can test within Windows is to run the Command Prompt (Run as Administrator in Vista or Windows 7). From there, type CHKDSK C: /f /r and press Enter. This will scan the file system, and the free space for errors

Check your drives S.M.A.R.T. status with a tool like GSmartControl. If there are serious problems like defective sectors, these are probably visible in the data. You can also launch a self-test to find out about new errors, that haven't been logged yet.

Not the answer you're looking for? Browse other questions tagged hard-drive troubleshooting diagnostic or ask your own question.

1
How do I detect HD problems in my laptop?
0
Hard Drive checking
150
How to check the health of a hard drive
67
Extremely high disk activity without any real usage
39
How do I troubleshoot when I have no clue where to start?
4
Brand new Seagate HDD has high raw read error rate
2
Hard drive life monitor?
3
S.M.A.R.T reads 'Caution' on external hard drive but no bad sectors were found
3
Windows 7 computer hangs for a few seconds very frequently; disk I/O light stays on turing freezes
2
HP Probook 4530s great specs, but lagging. Hard Drive?
See more linked questions

23
Why are my hard drives failing?
1
Hard drive won't show up after PSU swap
3
External hard drive doesn't appear in Computer
0
How to easily replace the hard drive XP is booting from
3
Very Slow Hard-Drive until reboot
2
Why does my hard drive perform well in benchmarks but slow in applications?
0
Slow hard drive with possible bad sectors
0
Is it a good idea to run fsck on a possibly failing hard drive?