How can I produce high CPU load on a Linux server?

I’m currently in the process of debugging a Cacti installation and want to create CPU load to debug my CPU utilization graphs.

I tried to simply run cat /dev/zero > /dev/null, which works great but only utilizes 1 core:

Is there a better method of testing/maxing-out system resources under load?

Related: How can I produce high CPU load on Windows?

Try stress It's pretty much an equivalent of the Windows consume.exe:

No need to install any extra package, your good old shell is able to do it alone.

This one-liner will load your four cores1 at 100%:

How it works is quite simple, it starts four endless loops. Each of them is repeating the null instruction (:). Each loop is able to load a CPU core at 100%.

If you use bash, ksh93 and other shells supporting ranges, (i.e. not dash or older ksh), you can use this non portable syntax:

Replace 4 with the number of CPUs you'd like to load if different from 4.

Assuming you had no background job already running when you launched one of these loops, you can stop the load generation with that command:

Answering @underscore_d's comment, here is an enhanced version that simplify a lot stopping the load and that also allow specifying a timeout (default 60 seconds.) A Control-C will kill all the runaway loops too. This shell function works at least under bash and ksh.

1Note that with CPUs supporting more than one thread per core (Hyper-threading), the OS will dispatch the load to all virtual CPUs. In that case, the load behavior is implementation dependent (each thread might be reported as 100% busy or not)..

One alternative way would be

or (if nproc is present)

OpenSSL is almost always present on nowadays distros, so no extra packages needed.

I made a simple python script which does the same. You can control the number of cpu cores you want to load. The good thing about this is that it won't consume any other resource besides the cpu. (I think mark johnson's idea would consume a lot of I/O resources, which is undesired here.)

Just run this script from the terminal $ python temp1.py. You need to kill the script when you are done.

Here, is my cpu consumption output when I load 3 of my cores.

commands for every core in your system.

I've been developing stress-ng, an updated stress tool that can stress a wide range of aspects of a Linux system. For more information, see http://kernel.ubuntu.com/~cking/stress-ng/

Usage is similar to stress

I usually take the cpuburn suite:

Replace 4 with the number of cores / HT-threads you have or want to stress.

Note: This stresses as much chip area as possible at the same time, it's programmed to generate maximum power dissipation. I had to write this post a second time, somehow my machine didn't like it :-(

You could also do cpuburn in sequences:

And when you want to stop them:

You could also multiply burnP6 & to match the number of CPU cores on your system.

You can run that command as many times as you want, and it will take up a different core each time:

Here you can see dynamics example in which 50% load is generated on CPU core 0: 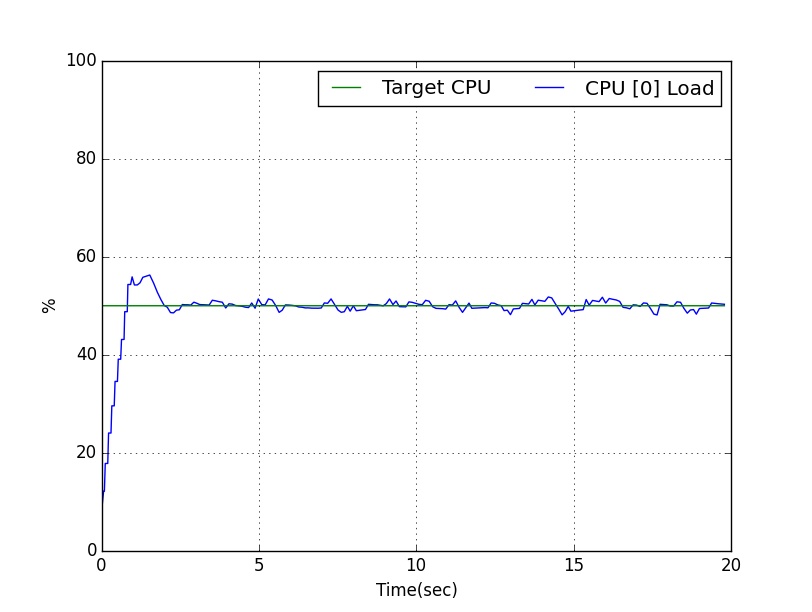 You can run the process on other cores at the same time.

Here's the way I use and there's no need to install anything extra.

For example to start with 4 processes,

You can change the number of processes by the option "-P" above.

pxz is a parallel implementation of xz.

pxz -9e /dev/zero --stdout >/dev/null should do the trick, as this is quite cpu intensive.

Newer versions of xz have the --threads option which is a substitute for pxz.

I wanted to add this to @jlliagre's comment, but I don't have enough reputation. If you're going to use this code on multiple servers and the CPU count will vary, you can use the following command:

This will utilize all of the cores on your server regardless of how many you have. The command nproc is part of coreutils so should be on most Linux installations.

Hit any key to stop the test!

A simple command line does it too:

Run the program stress specifying all the cores you have on your CPU:

You can get it on Debian/Ubuntu: sudo apt install stress

87
How can I produce high CPU load on Windows?

22
What regulates Intel SpeedStep CPU throttling? Can I get some control of this on Windows7?
87
How can I produce high CPU load on Windows?
0
Prevent high load average caused by Apache
9
High CPU load from System when idle
5
Django's dev server causes permanent high CPU load with Python 3
0
Is there anyway to produce realistic load(cpu,memory and disk all together) on a linux system?
0
High CPU usage 32bit Linux App