Is there a way to have Firefox profiles and switch between them?

Here's my situation: I use various web applications like, say, Google calendar, so I log into Google and it remembers me. But my wife also does things with Google apps, like, say, Blogger. I help her out a lot, but to do this I have to log out as me, log in as her, do the work, and then log out and in again. This is very annoying. Is there some way to have Firefox profiles, and switch between them so that each profile has the cookies to remain logged in, so I can work as my wife without having to log in and out all the time.

(I know there is the concept of profiles, but I can't find a way to switch between them in any straightforward way.)

Instead of switching the whole profile it might be more convenient to just switch the stored cookies. The extension CookieSwap exactly does this for you.

ProfileSwitcher can do this for you. It adds a new option to the browser menu from where you can easily select and switch between profiles. You can also run multiple Firefox profiles simultaneously. 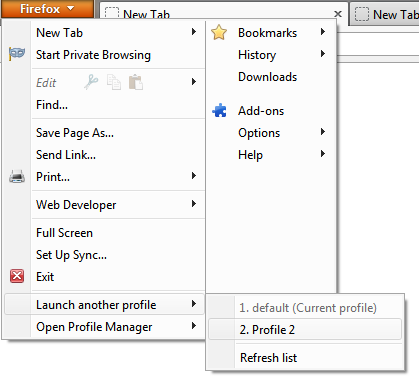 Use Profile Manager to create profiles.

You can use command line arguments to perform various things. This has such an advantage that you can create several shortcuts on your desktop with those parameters.

will open profile manager. You can create profiles here, and choose the one you want to use, at startup time.

Keep mind that if:

After you've issued firefox.exe -p and created profiles named, say, Alice and Bob, you can then create separate links on your desktop / quick launch / start menu:

(or perhaps without -no-remote for one of them).

You can also just make it

and each time you open Firefox, you'll be prompted to choose the profile you want. Just make sure to update all the shortcuts you have on desktop / quick launch / start menu.

Why at all complicating life so much with the command line args instead of installing an add-on?

I already use >30 add-ons. If I used add-on for everything I wanted to configure, I'd end up with twice as many ;) but of course, YMMV.

Firefox comes with an inbuilt Profile Manager. Try it.

1
Firefox with profiles -- just use the default

0
Can Firefox have 2 Windows or Tabs open side by side, each for a different profile (one for work, one for personal use)? IE 8 can but can't remember the profiles
1
Somekind of "Cookies Manager" for Firefox 5?
3
Is there a way to see and manage the data in my Firefox Sync account?
0
Clear Firefox cookie without restarting?
0
Firefox Won't Save My Google Cookies Between Restarts
3
Firefox OR Chrome separate cookies for different domains
0
Restrict Firefox to specific sites
0
Running multiple instances of the same Firefox profile / removing the need for profiles