In a multi-monitor configuration, a number of web pages are appearing differently when the page is dragged to the other screen.

The URL I'm testing is this one. http://www.lgsolutions.com/products/lcd-monitors/lg-cloud-monitors

Side by side example

The brighter monitor has Gamma, Brightness, and Contrast set so that the image should appear, but doesn't. By default, Gamma is way too bright on the LG E2411 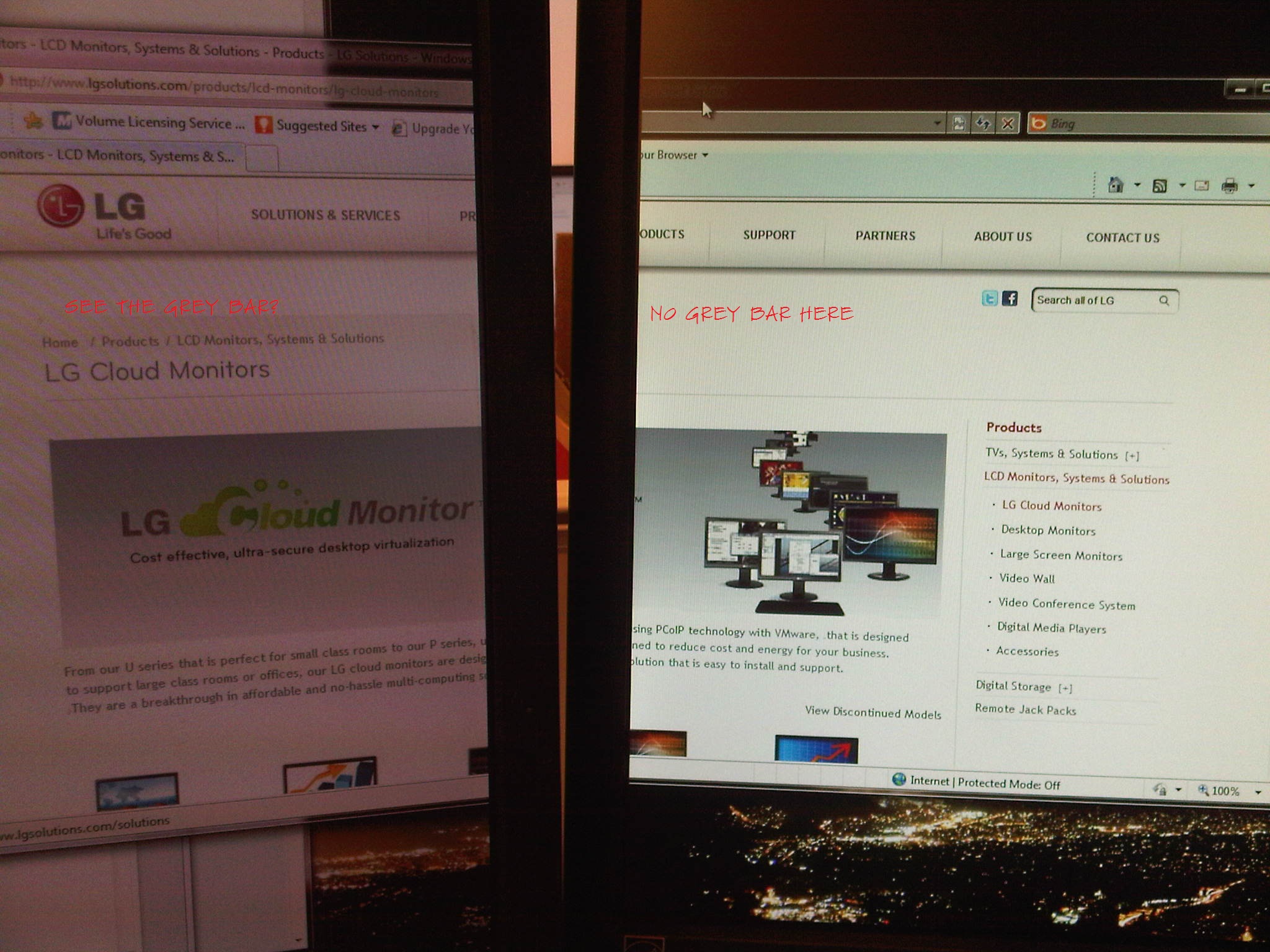 Note This image is dim because it reduces eye strain

(page is stretched across both screens)

If I use a Dell monitor in replacement for the LG monitor then the web page appears correctly. This occurs when the Dell monitor uses a different driver than the default windows one.

I just got off the phone with a CDW technician, and he has the same issue with a different brand of monitors. The only common configuration we both have is that we use the Microsoft PnP driver on Windows 7.

Could it be that the PnP driver in Windows 7 has issues rendering web pages in a multi monitor configuration?

Different monitors will often display images differently even if you have the same brightness/contrast/gamma settings across both. This is especially true of monitors from different companies.

The reason for this is because, simply, no two LCD panels are equal (unless they're the exact same model/SKU, of course). Even if they both are rated for certain contrast ratios, color depths, etc, they still may have different colorspaces (aka color gamuts). At the most basic level, each pixel is assigned a color based on a set of three numbers: the red component, the green component, and the blue component. What changes based on the manufacturer is the question of what pure red looks like, pure green looks like, and pure blue looks like. Even though these three colors still may be combined to create 2^32 different color shades, the actual hue of the primary color itself can still differ depending on how the panel is manufactured. This means that the appearance of red, for example (#FF0000) on one monitor will not necessarily exactly match its appearance on the other monitor.

Each display has its own color gamut. A color gamut is basically a description of the colors that a monitor is physically capable of displaying. The gradients that appear as you sweep from one color to another is a part of how that's defined. Because of the way the human eye perceives color, the practice of designing a display that outputs color in a fashion that looks both complete and pleasing to the eye is a very researched one. Because of the inherent differences between displays themselves and between how we may perceive color and how we expect color to look, we have gamma correction. Gamma correction describes how we compensate for these differences.

You may be familiar with the gamma curve (example below). What this does is adjust the luminosity values for each shade in the scale such that it matches some desired appearance (for typical viewing, it may be an linear attenuation, or if you're in publishing, it may match the output of the printer you use).

For you, since you set your software gamma settings across both monitors, that accounts for some of it, but it will not cause both monitors to match. Because they have different color spaces, you will not likely find a way to get the images to match exactly. Next, I would try seeing if I could change the color temperature and brightness/contrast values of each monitor through its on-screen controls, but that will only go so far.

If you want both monitors to display the exact same image, the best solution is always and always will be to simply buy two of the exact same monitor. 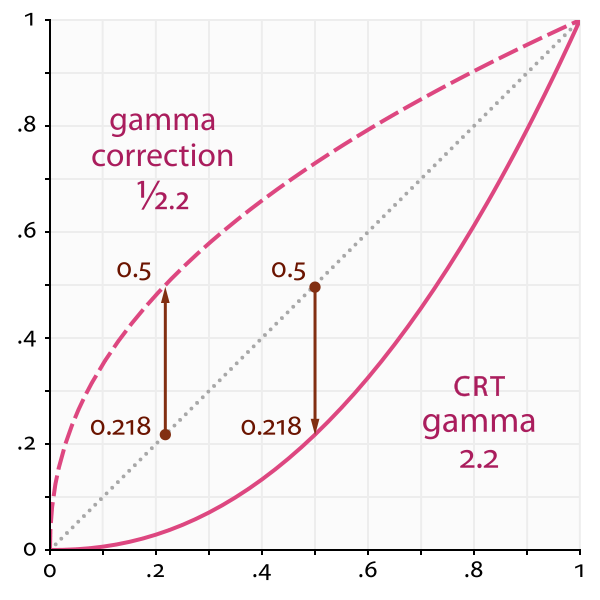 Not the answer you're looking for? Browse other questions tagged windows-7 multiple-monitors display or ask your own question.