I'm having an issue getting VirtualBox to boot from the network. I have a Server 2k8 installed and setup and acting as AD DS, DNS, DHCP and WDS. I have two adapter on the server, one of which I have setup as a static IP the one I'm using to hand out IPs to some of the other guest VMs and its setup as a 192.168.2 address.

I have a couple guest VMs that I'm not sure if I'm setting up the adapters on them right or not. The static IP adapter on the server is adapter #2 and it's set to bridge, Intel PRO/1000 MT Desktop and is set to Allow All. Now on some of the guests I have those adapters setup the same but when I try to boot from LAN it either gives me a No boot medium found. System Halted! message or it will get a 192.168.1 address.

I have a clonezilla.iso attached to the guest VMs and when I choose to Network Boot from iPXE from the list of options it presents it finds the 192.168.2 server and I'm able to press F12 and my Windows 7 image will load up and I'm able to install it. On the guest VMs I've tried setting the adapters to PCnet II and PCnet III and it will show the DHCP server IP and the guest IP and they're getting a 192.168.2 address but then it says No file found and sticks on the No bootable medium found. System halted!

Could someone help me out and see where I might be messing up?

For anyone who runs across this, I had the latest version of VirtualBox and after reading through some of the forum posts on virtualbox.org found there is an extension pack that has updates for PXE that doesn't install when you check for updates. I downloaded it and installed it and am now able to successfully boot PXE like normal without having to go through Clonezilla lol.

This is not an answer, but a long comment, with pictures. Seth's self-answer is the answer.

But I've been hunting for this "solution" for probably a year, and there are so many threads in the VirtualBox forums about PXE boot problems, I just wonder how many of them are caused by just not having the non-free Extension Pack installed. Some rainy day I'm going to link them all here. :)

I had installed the Debian-friendly open-source version from my Linux distro's package manager (virtualbox 5.1.38-dfsg-0ubuntu1.16.04.1), without having downloaded the corresponding Extension Pack. 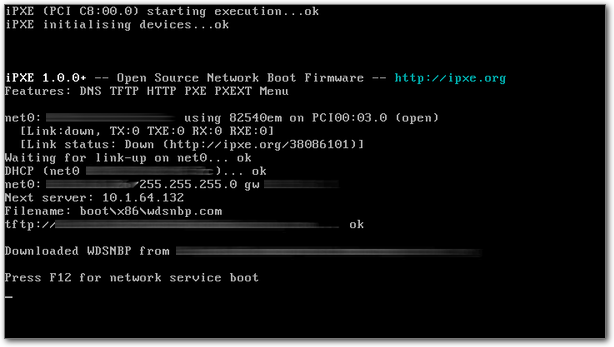 However, that boot ROM seems not to work with the (Windows) workstation imaging environment at my institution. It seems to load a boot image initially, but I always end up with the following fatal error: 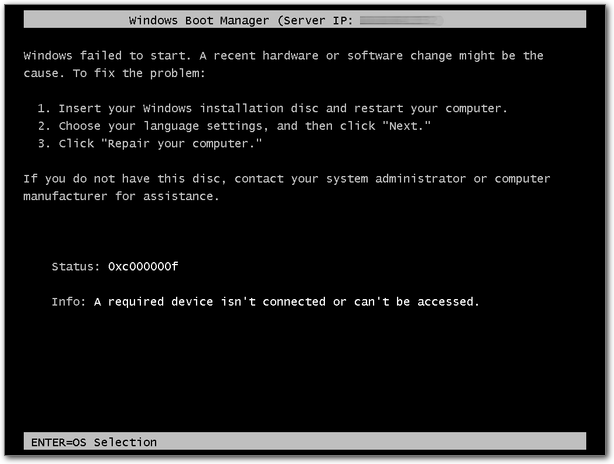 The (presumably secret IP-containing) PXE boot ROM that comes with the Oracle Extension pack, however, does not have this problem, and loads the workstation imaging environment without apparent issue. Its boot messages look like this: 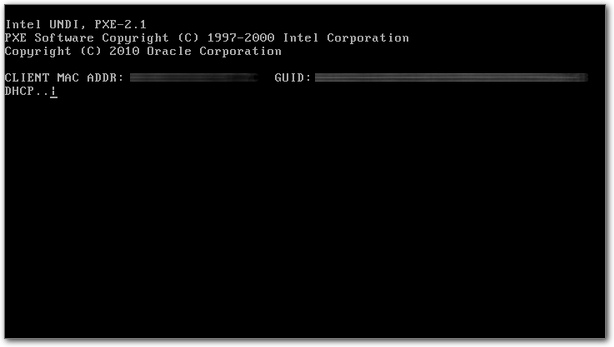 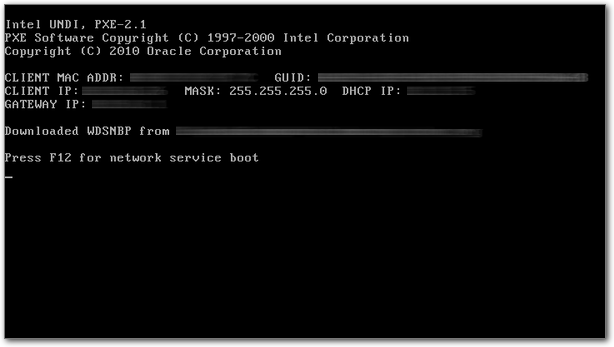 The rest of the boot process after that proceeds fine.

Not the answer you're looking for? Browse other questions tagged windows-7 virtualbox windows-server-2008 clonezilla pxe or ask your own question.