I'm looking to add a route so that anything on our corporate sub net is routed through en1 vs en0.

The answer to the first two questions should be ask your corporate IT person.

If you really need to do it yourself then open a command prompt and check the output of these commands:

The third question is a bit harder. You wrote that Priority order states that the non-corporate network comes first. I assume this means the default gateway is set to the non-corporate network. If it was the other way around it would just have worked. Now you will have to find out what server(s) MS communicator tries to contact and add separate routes for that.

This is how I understand your network. 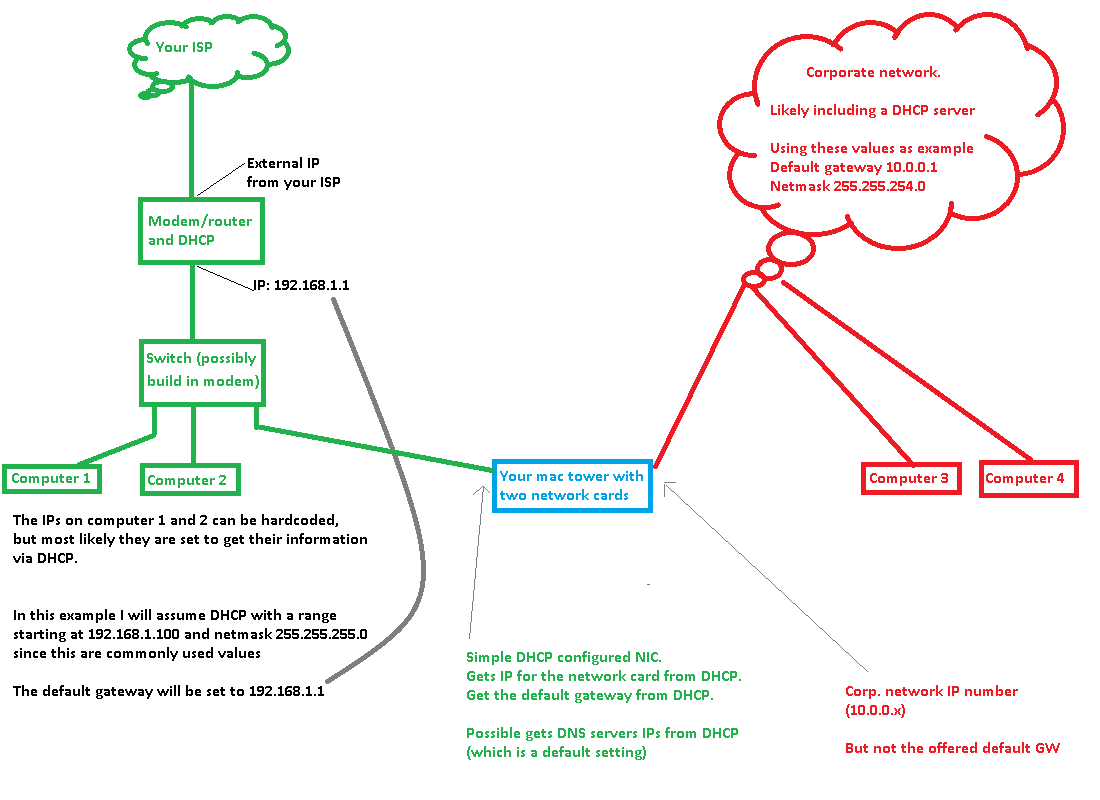 Lets say the corp. network gets plugged into the NIC called en1.

Almost all larger networks use DHCP. This means your card will announce its presence on the red network (think it yelling 'Hi, I am here. Give me the information I need').

The DHCP server will respond and usually it will tell the the computer what it needs. Try this. I expect that you will get an IP number, netmask, a default gateway and the IP for the DNS servers.

The IP is what gets set on your NIC. Write this down because you might need it later. In this example I will assume you got 10.0.0.42

The netmask will tell you which part of 10.0.0.42 is your network, and which part is the identification for your computers. Combined these allow you to access the local corp. network.

If a computer is not on the local corp. network then your mac will send it to some computers who (hopefully) knows how to forward it. This is the default gateway. There is no guarantee that your corp. network uses one, but it is very likely and it is something we do not wish to use later on.

Now for the green ISP network.

I can be briefer because things are more or less the same. You are very likely to gets and IP, netmask, default gateway and DNS server IPs.

However you can only have one default gateway.

You wrote that you wanted to use the green network by default. So we will use the default gateway on this one.

This means that you can just connect the green network to en0 and let it auto configure, but that you want to manually configure the red network. This means that you will not be using DHCP on en1. Not using DHCP means you can create a conflict on that network (since we are no longer using the red DHCP server which is keeping IPs on the red network unique). So walk to corp. IT and ask for a fixed IP address. They will add that to the exclusion list on the DHCP server. I am going to assume you got 10.0.0.42 as IP number.

Now go to the Mac, boot with the green cable in en0, set for DHCP. You should be able to connect to the other green computers (test with ping) and to reach the internet.

This should answer your question, though I have one more paragraph because I thing you will run into problems with DNS. The DNS services provided by the ISP/green network will translate computer names to IP numbers for computers on the internet. They are unlikely to know about computer names in the corp.network. You might need to:

Not the answer you're looking for? Browse other questions tagged networking terminal routing or ask your own question.

3
How to route packets from Wi-Fi to Ethernet on OSX?
1
Windows 7 Set metric to use 2 different network interfaces at the same time
1
Getting a self assigned IP address in Mac OS X 10.10 (Yosemite) on a Mac Mini
0
How can I direct specific traffic through a given network connection?
-2
How do I share internet wirelessly through my Mac with DHCP service turned off?
0
Windows 7 2 Network Cards