Logitech unifying reciever no longer works on ALL USB ports

I have a Logitech m525 mouse that I use at work (Win 7 32-bit). For the first little while, I would take the mouse home with me which meant unplugging the Unifying receiver. After a few times doing this however, I noticed that if I plugged the Unifying receiver back into a previously installed port, it wouldn't work. Over time, I've actually run out of ports to plug this device into. I get the following "USB Device Not Recognized" error:

Looking in my device manager, I see that there is a "Unknown Device": 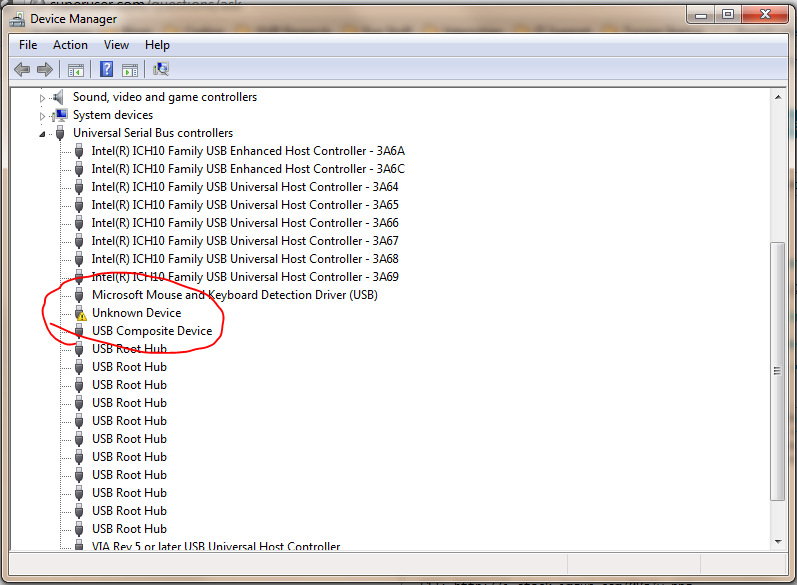 and in the devices properties status I have the following:

Windows has stopped this device because it has reported problems. (Code 43)

I've tried uninstalling and updating the driver, to no avail. I've also downloaded SetPoint, and installed previously when I first installed the mouse. It still doesn't work. My question is two fold:

I had exactly the same problem, just watched this simple video on YouTube.

Basically the steps are:

I tried it and it works.

This is typical behavior of a broken/worn down unifying receiver. The only way to fix this is to purchase another. However, you'll have to setup your old devices to the new receiver using Logitech's software.

This may have to be done with each new computer you use the mouse/new unifying receiver with. Although after a fresh install of Windows 8, my receiver picked up the mouse just fine without any of the Logitech software.

If the Receiver isn't being recognized it is not necessarily broken. I plugged my t600 receiver into my pc (win 7 64bit) and i am having these same problems. I move over to my laptop (windows 8) with the same receiver and i can use the mouse with no difficulty. There is something about windows 7 64 bit that is having issues with this. Test your receiver on a different device before claiming its broken. or returning your product. Chances are you may be able to make this work.

A bit late to the party but this worked for me. For some reason the usb.inf file was missing or corrupt for me.

-- Enter 'C:\Windows\INF\' in the Search for driver software in this location field and click Next

I'm pretty sure I ran into this problem after Acronis Backup & Restore 11.5 imaged my disk to a .tib file.

Both the source system and the target system were apparently missing C:\windows\inf\usb.inf afterwards.

I copied it over from my netbook and an 'Update Drivers' later, had my logitech k400 wireless keyboard working again.

This seems to have affected not just logitech unifying receivers, but all USB Composite Devices. My Android tablet is also affected, as well as my Microsoft Xbox 360 USB Controller receiver, since it has two 360 pads sync'd to it, but my wired PowerA Minix360 is not affected. My microsoft wired keyboard 600 and logitech V220 are also not affected, as they are not 'USB Composite Device', but 'USB Human Interface Device'.

USB Composite Device is used to wrap up multiple child Devices in a single parent Device, such as two USB Human Interface Device endpoints (One for keyboard, one for mouse) like the Logitech Unifying Receiver does.

Big thanks to lucvdv of answers.microsoft.com for figuring it out:

Thanks for your patience in tracking it down, lucvdv!

My Logitech USB receiver had similar problems to those above. Drivers were not available or couldn't be found. I tried everything. Turned out it was a problem with the last Windows Update 2/13/2018. The link below shows you how to go into the Device Manager and command prompt to uninstall the last update. Not sure if it only uninstalled it or if it uninstalled and then re-installed with a fix, but my mouse and keyboard are working again. See link and explanation below.

After installing this update, some USB devices and onboard devices, such as a built-in laptop camera, keyboard or mouse, may stop working. This may occur when the windows update servicing stack incorrectly skips installing the newer version of some critical drivers in the cumulative update and uninstalls the currently active drivers during maintenance. Microsoft is working on a resolution and will provide an update in an upcoming release. Workaround steps are available in KB4091240.

After installing the February 13, 2018 security update, KB4074588 (OS Build 16299.248), some USB devices and onboard devices, such as a built-in laptop camera, keyboard or mouse, may stop working for some users. Cause

This issue occurs when the Windows Update servicing stack incorrectly skips installing the newer version of some critical drivers in the cumulative update and uninstalls the currently active drivers during maintenance. Resolution

Method 1: Restoring your system when a working keyboard is available

If a working wireless or PS2 keyboard is available, or if you can use the on-screen keyboard via a working touchscreen, follow these steps to restore your USB functionality:

Use the links for a clearer instruction....they didn't copy well into this.

Have you tried unplugging the power cord from your computer (and removing the battery in case you're using a laptop) for 30 seconds?

The receiver should be recognised and working again the next time you start windows.

I opened my 2 Logitech receivers (as suggested in the youtube video) and the four copper pads appeared highly corroded with a great deal of black oxidation on the leads. I could not get them to work by stuffing a piece of paper between the circuit board and USB housing, as suggested in the video, but I was able to hold the USB receiver inside the laptop USB port with my hand and it was recognized. However a few moments later and I probably quivered and lost electrical contact, and it said, "USB port not recognized" after having formerly recognized it.

You probably need a new receiver, or you can follow the youtube video, take apart the nub, and try to put it together so it will work. I must say, you may not have good luck, the manufacturing quality of this USB transceiver is horrible, Logitech, shame on you!

I had a similar issue. In my case I found the USB receiver actually pushed slightly too far in to the port. It somehow detected as an HID Mouse but did not install properly. If I pulled it back out just a millimeter it would kick in and work just fine.

FIY you can also clear old drivers sometimes by right-clicking on your main drive and selecting: Properties > Disk Clean Up > Clean Up System Files > Check all boxes.

This can sometimes clear stored but unused old drivers that you might want to update or just re-install fully.

Per the post above, copying usb.inf and usb.pnf worked for me and got my Logitech Unifying Receiver and wireless mouse working.

In my case I had to copy them from: C:\Windows\System32\DriverStore\FileRepository\usb.inf_amd64_neutral_f636e83c550b20d0 to C:\Windows\inf

Not the answer you're looking for? Browse other questions tagged windows-7 logitech-mouse logitech-unifying-receiver or ask your own question.

12
How to pair Logitech Unifying devices to more than one transceiver
23
Same WIRELESS mouse + keyboard (Logitech Unifying) for two different computers?
6
Mouse receiver stopped working after pairing mouse to an unifying receiver
1
Which Logitech app do I need to download for my mouse?
1
How can I connect a Logitech MX 1100 mouse & Wave 2.4 keyboard with the Unifying Receiver?