I prefer the audio output on my computer to use the standard audio jack output due to volume issues. But I am using a monitor with HDMI. I have chosen to set the default audio device to be "Speakers" 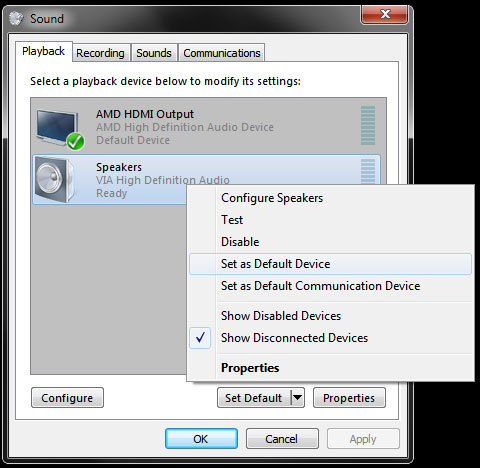 But every time I reboot the default audio device is the HDMI Output again. 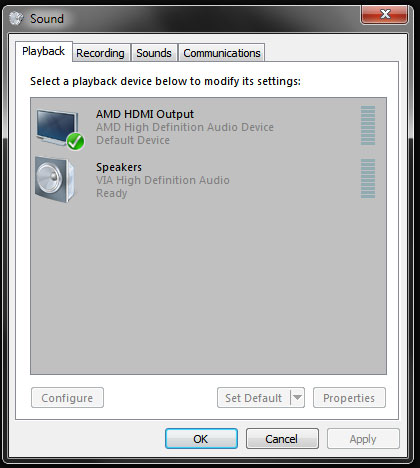 I am running Windows 7 64bit. Why does it not remember the default device? (I do shutdown and boot up properly without errors.)

The Quick and Easy Way Out

But I Want It To Work Right!

The reason this is happening is likely because the VIA sound driver has a bug that causes it not to perform "jack detection" correctly.

Jack detection is a mechanism which detects whether you have a sound device plugged into your sound jack. It is a fairly new technology based on sensing whether an electrical current is being drawn from the audio port (a very small amount of energy is needed to transmit the audio over a standard 3.5" cable).

When jack detection is working correctly on Windows 7, Windows will automatically keep using a device marked as default as long as an audio output (speakers, headphones, etc) is plugged into the device. But if some other device has a connected jack and the default device doesn't, it will switch to the device that is connected. It does this to prevent people from having to manually dig around in the control panel to listen to audio: it helps new users because the audio "just plays" out of whichever device the jack is plugged into.

Jack detection is actually a software mechanism that is easily broken and very hardware-specific. On the Linux operating system, the Advanced Linux Sound Architecture (ALSA) driver developers have struggled with jack detection for years, having the labor-intensive task of making it work on tons of different sound cards. Unfortunately, most motherboards ship a unique or nearly-unique audio chipset, making the problem worse. This also means that Windows drivers are equally error-prone.

Bad Driver Developers Vs. The Public

Suggestions that may enable proper jack detection without having to disable the device in the device manager:

The reason that the system always thinks your HDMI audio is "plugged in" is likely that you use HDMI or DisplayPort to plug in your monitor. Windows says "oh, you have a monitor plugged in", and the electrical signaling with the monitor indicates that an audio path is available, so of course it tries to use that as the default device -- especially if your VIA audio driver doesn't have proper jack detection and Windows thinks nothing is plugged in.

If nothing in the UI changes to say "Device unplugged" or "Not plugged in", then jack detection is not functioning properly.

If you can definitively determine that jack detection is working properly, and you still can't get this to work as you desire, you may have to resort to disabling the device in the device manager. :/

In windows 10, I use headphones that are connected via optical, and recently the computer has decided at random to just switch to the monitor built ins for no apparent reason in the middle of youtube videos and games. Looking at the responses here, I tried looking into the device manager. The audio inputs and outputs area looked to just mirror the available things on the playback devices, but under "sound, video and game controllers" was an "Nvidia high definition audio" which I disabled and bam! no more monitor speakers showing up in the playback devices. Now to see how long this one works.

You should not have to disable anything on your computer that you are not using. What i did was go into programs and features and delete the audio driver for your video card and also delete the 3d vision driver as they are never used(mine was nvidia). The only driver you need is your GRAPHICS driver for your video card as the rest is overkill. Start off by deleting everything off your computer that you don't need then you will have a better understanding of what the problem is.Also to note is in your sound window, when you change back to your default which in my case was "speakers" you need to configure it before you exit and make sure left and right chanel is selected BEFORE you exit.

Update on this for Windows 8 (if anyone else comes across this):

Using a dell 23 inch monitor via HDMI, disabling the HDMI Audio from Device Manager did not solve my issue. Second I unplug and replug, or restart (either hibernate or full shutdown / reboot) the issue returns where is resets to the HDMI. If you right click the sound icon in bottom right of taskbar (by clock) and choose "playback devices" you can then right click the HDMI deice listed and choose disable from there.

Dong this removed the device from that menu and solved my problem.

No idea why it wouldn't take from device manager.

In my case I wanted the HDMI audio.

Not the answer you're looking for? Browse other questions tagged windows-7 audio hdmi or ask your own question.

0
iTunes not playing without audio devices connected to audio port
0
HDMI Audio Lower than Computer Audio
3
How to use HDMI display device audio output without extending the desktop to that device?
1
HDMI to monitor with no speakers - How to get audio?