I have a mouse and keyboard with the Logitech Unifying receiver. I have two of those receivers, one in my desktop and one in my laptop. It is quite a pain to actually unpair and repair the mouse+keyboard from one PC to the other. (I think logitech did this on purpose so you would have to buy a second mouse+keyboard, who knows) .

In any event is there some hardware method of resolving this or some "hack" to be able to easily switch from one unifying receiver to the next quickly?

I have seen some post on superuser regarding softare such as input director or synergy but thought I would see if anyone has hardware solution first.

I'm going to answer no - it is not possible. There appear to be similar questions on Logitech's site so you can search there as well. I suspect the answer is that when you pair, the transceiver and the device exchange several bytes of random data and form a key to both allows the devices to recognize each other and to encrypt their wireless transmission.

The problem is that the transceiver may have the ability to recognize something like 5 devices, but the input devices can only recognize and pair to one transceiver. That's because the transceiver only has to sit there and accept a signal it recognizes, otherwise it is passive. Sit, if you see a signal with the correct encryption and ID, accept input, otherwise ignore.

The only Logitech device that can do this is the new K760 keyboard for bluetooth. None of the Unify devices appear able to do this.

The new Logitech M720 has this feature:
http://www.logitech.com/en-us/product/m720-triathlon 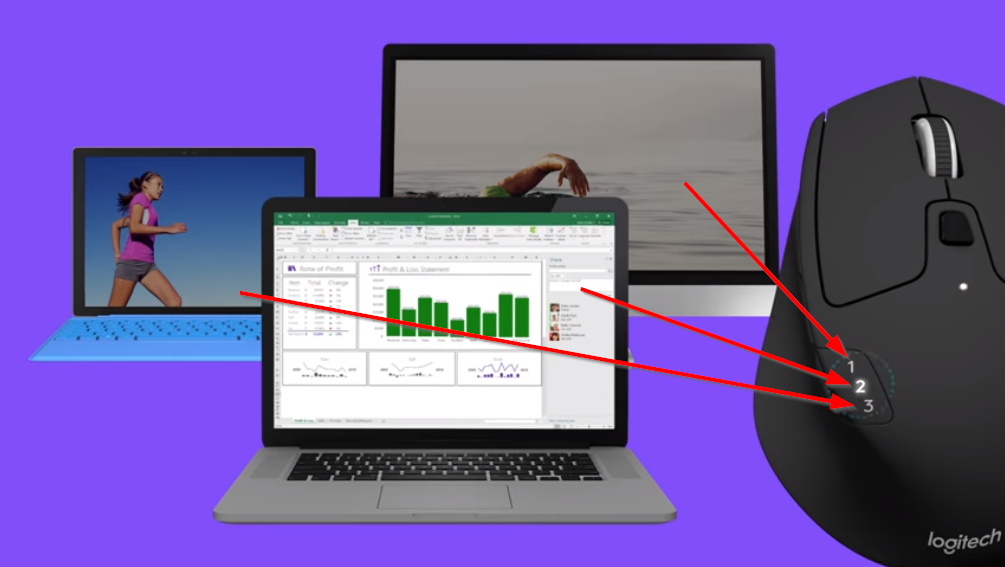 This can be achieved easily using a $6 USB manual switcher...That is sharing a single keyboard/Mouse etc via a single Unifying receiver, you need a power USB hub as well

Suppose two receivers (eg. installed in a PC and a laptap) could unify successfully and pair with a keyboard - and then the keyboard is "used" while both machines are on and within RF range ...

Or worse, unifying by tripling / quadrupling ... receivers, each installed on a unique host, to a single device which would then be "used" simultaneously by all the hosts, within RF range, that are on ... hmmm ....

Migrating the receiver back and forth between the two machines is easier - after all, it is desired that the big pieces of hardware (K & M) do so (ie. migrate between the machines) and the receiver can be conveniently stored in one of them until reinserted in the target host machine's USB port. However, the anecdote in Logitech unifying reciever no longer works on ALL USB ports and information from USB port may stop working after you remove or insert a USB device implies possible USB connection failure either from mechanical insertion / extraction damage (USB type A duty cycle is approx. 1500 connections ) or transient software malfunction of the receiver's USB registration.

related: How to pair Logitech Unifying devices to more than one transceiver

Recent Logitech devices support a new technology that is called Logitech Flow. This allows you to create one central work station for multiple computers. Your keyboard follows your cursor from one computer to another, meaning you can type on multiple devices in one fluid workflow. The requirements are that the devices support the technology (unfortunately older devices do not), and that the computers are connected to the same network. The integration is managed by a special software that also needs to be installed.

Apart from the Flow technology, as indicated above, recent Logitech keyboards and mice give you the possibility to choose one out of 3 possible computers to work with through some enumerated keys.

Not the answer you're looking for? Browse other questions tagged windows-7 wireless-keyboard wireless-mouse trackball logitech-unifying-receiver or ask your own question.