Need to reorganize pictures in folders named by date [closed]

Does someone know of any software/technique to reorganize image files in folders named by date?

Recently I had a similar need.

Specifically I wanted to move and rename files based on date the picture was taken, as follows:

The motives for me for this structure:

After spending an hour trying out various graphical UI based programs, eventually what got the job done exactly how I needed, was ExifTool.

Basically you're telling exiftool to read date taken (datetimeoriginal) information from within the picture file and use that information to rename the file, using YYYY/YYYY-mm-dd/YYYY-mm-dd-HHhMMmSS.ext format. Notice that there are slashes in the file format we specify -- this causes the file to be moved into respective folder structure, which is created on the fly.

You can move and/or rename files any way you like with this utility. If your requirements differ from mine, just refer to this page which contain nice examples from where I derived the command line I eventually used.

Came across this question searching for a solution to the exact same issue.

I found two programs to accomplish this:

This is a free utility to move or copy photos from one folder structure to another. A few less options than the paid version of Photo Move but it does allow to specify up to 4 levels of folder structure.

You can use ReNamer with some rules.

I know that Zoner Photo Studio should be able to do that, but I've never tried that. It supports a library mode and it can help you organize photos – it can move pictures taken the same day to individual folders.

Is this what you need? 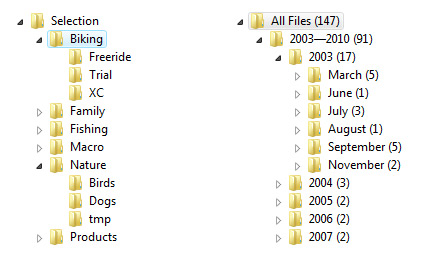 Open Windows Explorer > Go to Folder Containing Sub-Folders with pictures in it. CAVEAT: Assuming your folders are labeled with different dates (and hence time).

Then sort by folder's date created.

You can also use DropIt to move your images and videos to specific folders based on the EXIF data. I like DropIt because I can preview what gets moved before I commit to the move.

Not the answer you're looking for? Browse other questions tagged photos file-organization or ask your own question.

371
What are PATH and other environment variables, and how can I set or use them?

4
How are Linux files and applications organized?
0
Free Software to Increase the Resolution of the Pictures
2
change date-taken on photos
31
I need an automatic way of making a lot of numbered folders
1
When backing up files and folders, include or exclude thumbs.db?
0
Separate different filetypes of movies to different folders on my NAS