When sorting a table or range in Excel, the cell values and basic formatting like bold, italic, colours etc. move, but the following things do NOT move:

My spreadsheet has per-cell data validation, so when I perform a sorting operation it moves values around but doesn't carry their validation with them.

Here's an example before sorting:

And after sorting (A-Z on "Fruit" name.)

Is there a way to make Excel move the data validation rules along with with the values and formats when Excel performs a sorting operation?

Just to clarify, I have two separable concerns here:

My eventual solution was just to disable sorting entirely, by protecting the workbook and disabling sorting for all sheets. You can press the "Sort" buttons but they do nothing.

As an additional safeguard, I added VBA that re-applies Protect Workbook every time the workbook is opened, and brings up a worksheet with usage instructions and warnings (such as "Don't sort this!".) The end-user can un-protect the workbook at any time, so this isn't foolproof, but I believe it's the best I can do.

You can make a general rule for handling pH values and apply it to the whole column of values. You just have to include a condition that checks Key1 to see if the value is a pH; if it is, check the criteria; if not, just return TRUE so anything is allowed.

For example, here is a custom data validation rule applied to C2:C6 (Value 1 column) in your table:

This will limit pH values 0<=pH<=14 and only whole numbers. Since the rule is applied to the whole column, sorting will not affect the data validation. 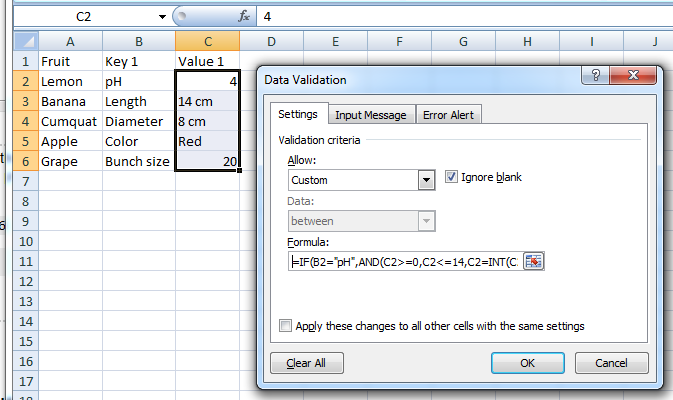 You can handle borders in a similar way if you apply them using conditional formatting. Just apply it to all the data in the column with an appropriate formula rule, such as

Looking at bits of old code, it appears I deleted and recreated the validators:

If you want to do anything in Excelprogramatically, record a Macro > do the operation manually > Stop the Macro recording > press Alt + F11 and view the code in the newly created Module. This is a quick way to pickup VBA programming. Good luck!

This is not entirely an answer to your question, but I feel it should be mentioned.

The way your data is entered into the spreadsheet is a bit uncommon, and if there are no specific reasons you might also solve the problem by changing the design of the spreadsheet a bit. The most straightforward way to enter data such as yours is to have one column per key (Color, pH, Diameter etc) and one row per Fruit. That way you can define rules and styles for the whole column and won't have to worry about sorting.

If you need to access data using a key and a value, you might be helped by using pivot tables and pivot table lookup (GETPIVOTDATA) or row/column lookups (VLOOKUP / HLOOKUP).

In your case the keys seem pretty well defined (otherwise a reason to go with the key-value approach), and given that Excel allows thousands of columns you won't run out of keys either. Using a separate column for each key will also function as a kind of input form. You won't forget to enter a value for a fruit since the cell for that value will be empty.

If you have several samples (not all apples have the same diameter, etc.) you will be able to treat each row in the spreadsheet as a single sample.

This approach will also facilitate further processing of the data such as creating diagrams and pivot tables.