I have been trying to log into a work presentation for three days. The site keeps prompting me to download Java 7u6, but when I follow the prompts it comes up with an error message reading:

Installation Failed: The wizard was interrupted before Java 7 Update 6 could be completely installed. To complete installation at another time, please run setup again.

I have tried the following things:

The operating system is Windows, and the web browser is Google Chrome. It isn't Windows 7, so it must be Windows Vista (round start button). I have Internet Explorer as my Internet browser.

Well, assuming you want to install from a clean slate, and you're running some flavour of Windows, I'd suggest giving JavaRa a shot - it's a tool that clears out older installs of Java, and installs the latest version. I usually use it to remove the 20,000 old versions of Java that end up on a system, but it might help in your case.

I had similar issues on Windows7. I wanted to install Java7u21 but this failed ("The wizard was interrupted before Java 7 Update 21 could be completely installed - To complete installation at another time, please run setup again"). It seems that I had an older Java7u9 installation, but I could not get rid of it using the Control Panel. The Java site recommends an uninstall tool that is itself based on Java, so if you have no Java running you cannot uninstall older versions that way. I tried JavaRa, but it did not work for me (it was not able to remove the older Java7u9 fragments). In the end I solved my problem (thanks to another forum http://www.bleepingcomputer.com/forums/t/468644/trouble-updating-java) by using Microsoft FixIt (http://support.microsoft.com/mats/Program_Install_and_Uninstall). This allowed me to completely remove Java7u9 and I was then able to install Java7u21.

I had a user trying to install Java 7 update 21 with same error message: Wizard was interrupted.... Try Setup again later.

PC was Windows 7 Pro, 64bit OS, User was set as an administrator to the PC when logged into the domain. PC was a NEW Dell Optiplex. Java had never been installed. User was using Chrome as default browser but also has IE9 and Firefox. Tried the automatic install and manual download. Both failed with same message as above. After reading several different scenarios of what people tried I began my attempt.

Logged in as Administrator to the domain on that PC with full admin rights. Could not install Java 7u21. Tried JavaRa and did not find any previous install or even any reminants of a previous install. Then tried NiNite.com's installer app. Again that failed to install. But I as able to get an MSI error code of 1603, Fatal error on installation.

I then tried to check to be sure that Windows was fully updated with all updates. Attempts to update Windows 7 also failed. Hmmm. I checked the Antivirus, Symantec Endpoint 11. Disabled it. Still cannot install Java. I also noticed the AV definitions were not current. Attempt to update using their LiveUpdate utility also failed. Now I suspect a MS user policy issue.

I logged out of the PC and relogged in as ADMIN to the PC itself. I launched the AV Liveupdate utility. It would not update either but I found an option in the MS Properties to check compatibility. I run the check and it suggested to run the application in Win XP SP2 mode. I also selected to RUN AS ADMINISTRATOR. The AV updated properly.

I then checked the Windows UPDATES. I was also able to update Windows 7 with about 4 more patches. One update failed (IE ver 10) but that I believe was insignificant.

Then I looked at Java 7u21. I had copied the full manual installer to the desktop of ADMIN (not that I felt I was required to) I then checked the compatibility options and selected Win XP SP2 mode and also selected RUN AS ADMINISTRATOR. This time the install completed. At the end there was one error where it stated BROWSERLAUNCHERROR. Apparently it was trying to open the browser to do something. I just clicked OK and moved on.

Logged back out and logged back in as the user in question. Navigated her default browser (Google Chrome) to Java's website and checked the version #. It verified that I had the latest version installed.

SUCCESS. I believe that these install failures may have to do with some incompatibility of the installer to Windows 7 as well as some user policy issues, some items allowed by the original ADMIN but not available to other users with admin privileges.

Hope this helps the next person.

I had the same issue as the original poster. I wanted to install the latest Java 7 win32 release on my Windows 64 install because that's the only version that works in Firefox as a plug-in (Firefox being a win32 app.)

we have to delete the "JavaSoft" key in the Registry START .... RUN ... REGEDIT ... search for JAVASOFT by keying Ctrl F we will find it in 2 or 3 places, simply delete all the JavaSoft keys

then delete C:\Users\myName\AppData\LocalLow\Sun folder if we find an Oracle folder in the same place delete it too.

Now do a fresh install

the enable "Windows NT" compatibility mode as per this picture 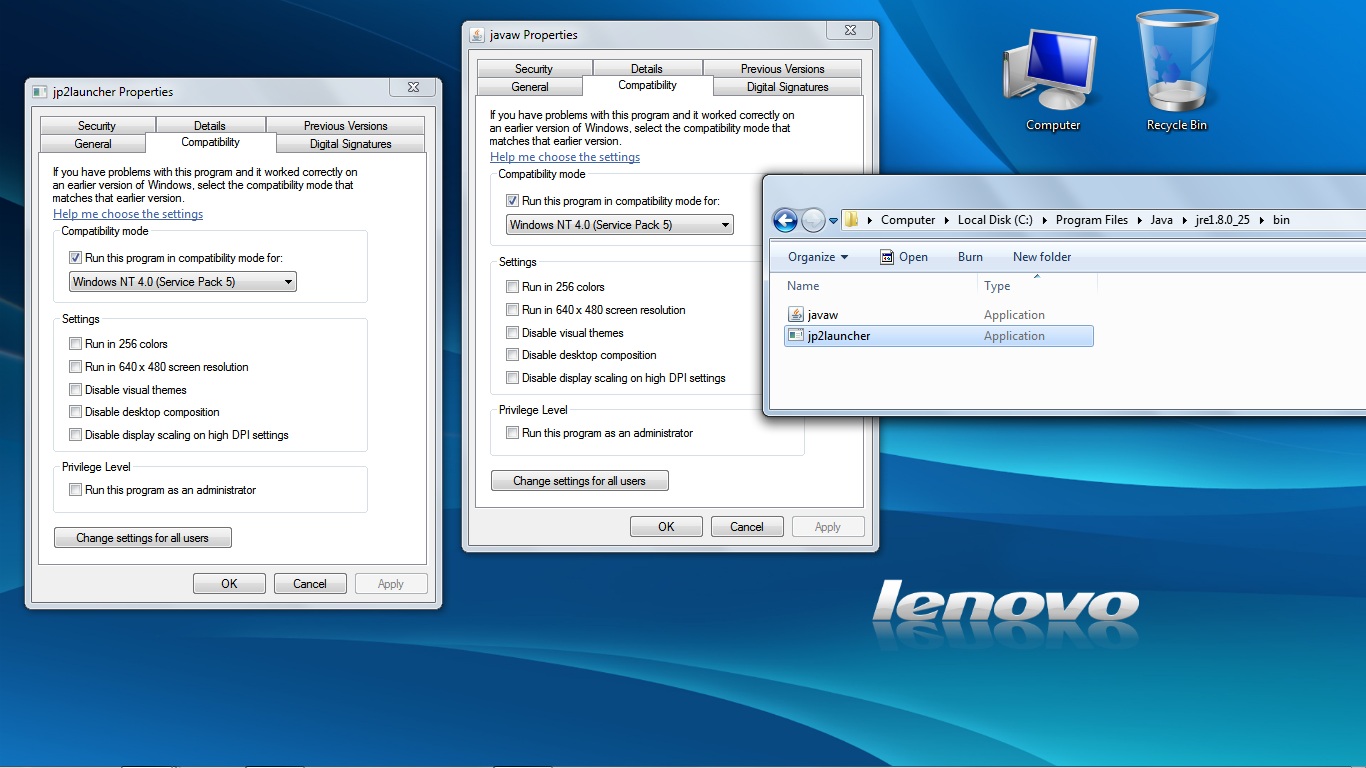 unblock blocked sites as per this picture 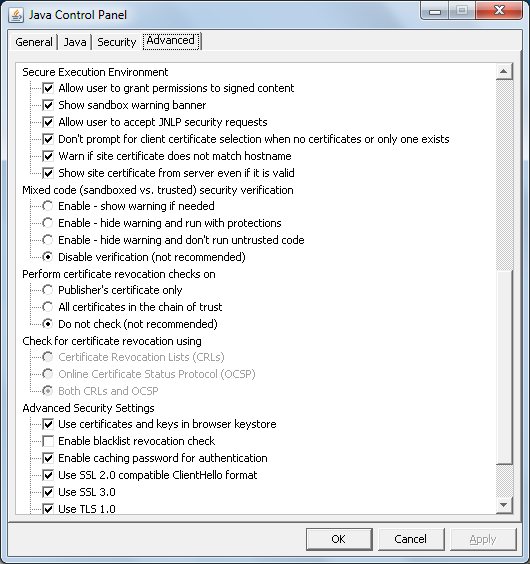