Can I format a USB stick in Windows XP, in HFS+ format, and make the USB stick Mac OS X bootable?

My Intel Mac OS X computer is corrupt and I feel at this point that I need to perform a fresh install of the OS. It consistently and automatically logs out, right after I log in. I tried logging in as the root. I tried safe boot and it wouldn't load.

Anyway, the point is I want put the Mac OS X installer on a USB flash drive and have it boot up on the Intel Mac OS X computer. Unfortunately, the computer is inaccessible, as I mentioned above.

So, I have a Windows XP machine that I'm using and attempting to create a bootable USB flash drive that's compatible with Mac OS X.

I have tried TransMac, MacDrive, and Paradox for Windows -- all of which proved unable to format the USB flash drive in HFS+. How do I know this? Well, even though the TransMac reports that ther flash drive has been formatted to HFS+, Computer Management in Windows says otherwise: 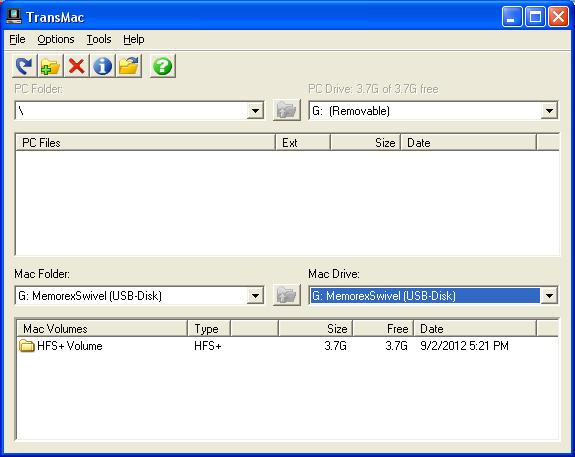 I even put the installer on the USB drive, after TransMac reportedly formatted it properly, and the Mac OS X computer didn't even recognize that a USB flash drive was inserted, via pressing the option key at boot time.

I'm not sure what the problem is and how to actually format the drive. Can anybody offer any help?

I think you would be better off downloading a Linux Live CD place it in your cd/dvd player on the XP Machine make sure the USB Drive is attached. Boot the computer ( you my have to enter the BIOS to select the CD/DVD as the first Boot Device) using the Live CD such as Super FDisk so create the HFS+ on the USB Flash drive.

I assuming that you know how to download the LIVE Linux ISO Image and burn it to a disk using the XP Machine. If not post back here and I'll post some tutorials that you can use.

Not the answer you're looking for? Browse other questions tagged windows macos boot bootable-media hfs+ or ask your own question.

0
unable to format external drive to HFS+ for Mac
8
Bootable USB stick with Truecrypt
1
Adding NTFS partition to disk in Windows makes HFS+ partition on same disk invisible in Mac OS X
0
Unable to HotSwap HFS+ Formatted SATA Drives (on a Windows Machine)
3
Are there any reasons why I wouldn't want to format a USB flash drive in HFS+ for Linux/Mac usage?
11
How to install DBAN (Darik's Boot and Nuke) on an USB flash drive larger than 4GB and make it bootable on an UEFI-equipped PC?
3
Computer can not see any bootable USB devices