USB drive is not opening

I don't know why I cannot open the contents of my flash drive.

When I plugged it into my laptop, Windows 7 did not recognize it. In My Computer, it's transparent like this: 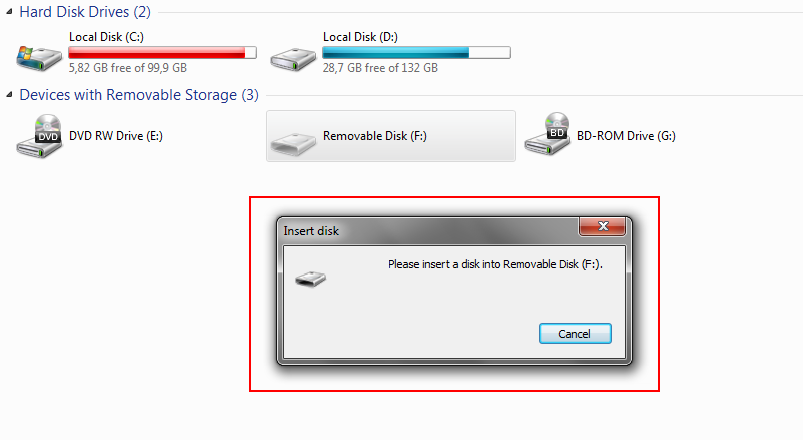 I need to access important information on my flash drive. How can I view it or copy the contents to my local hard drive?

Try ejecting and unplugging the USB drive. Then restart your computer and plug the drive back in. This usually resolves the problem.

Hello I have found this Super User question, but the few replies/solutions ended up being not the ones that made sense

Since I solved my issue, and it required some researches,

I'd like to share with you what I had learnt. P.S. SSDs are again FLASH memory devices, but the recovery process is different.

Unfortunately when a pendrive is not CORRECTLY detected, like:

it changed its name into

or it asks to insert a disk into removable disk

the problem is UNFORTUNATELY not software or driver matter

the MCU controller of that FLASH memory is slightly damaged, heavily damaged or either just dead. In the worst case, it is/they are the FLASH chip/s that are damaged/dead , but this looks a rare occurrence, less than 5% of cases.

Also note: FLASH memories, since some years now, use dynamic XOR coding when writing into chips , so neither swapping the contoller (given that we find the same one with same release version) will help

At that point, if you need the data, the unique solution is to find a company that is equipped with FLASH memory data recovery devices like (in alphabetical order):

(hey! They are all Russian manufacturers, looks like they are the experts in this field)

This data recovery process has a name: it is called CHIP OFF DATA RECOVERY

I'm in Italy and I've sent my dead pendrive to this Pendrive data recovery company. I have personally been there and they kindly showed me the PC-3000 FLASH device an their micro-electronic lab for the unsoldering operations

They kindly explained other interesting things like: in the majority of the cases, 95-97%, luckily the issue is a damaged/dead controller while the FLASH chips are healthy.

This mean that in 95-97% of the cases, when there is a FLASH memory with physical FLASH NAND chips, the recovery will succeed. Another story are the monolithic FLASH memories, like microSD and some gadget pendrives or most of PNY flash memories. NOTE: SanDisk is often a bad issue they explained, because SanDisk transparently encrypts the FLASH chip content and not all the cases can be decrypt

So I have been lucky, I was NOT in the 3-5%, my thumb drive was NOT SanDisk and so I got my data back.

About chip off , together with the data, they returned to me my BGA FLASH memory chip, which was obviously unsoldered from the pendrive's PCB...

So if your pendrive or FLASH memory device is dead or shows one of the symptoms described above, and you need the data or pictures in it,

the solution will be to search for a similar company in your country submit the memory and cross fingers :-)

About the cost? Usually they are described on the respective websites, but always ask for an email with MAXIMUM price confirmation.

You can try and repair the flash drive, just right click on the drive letter for the drive, such as, if it is "D" drive right click select properties. The second tab says tools on it open that tab select "check now". I have also used the back up now at the bottom of the page to recover files, but it is usually better to use the back up now to create a director for your files and sync them when you attach the flash drive.

If this does not work I would download Super FDisk is is a Linux based disk that usually comes in a ISO format. So you will need to burn it to a cd rom leave the disk in your CD/DVD drive, make sure the flash drive you are having problems with is attached directly to the computer ( you can use a usb hub but sometimes the device is not found) so Super FDisk can find the device. Yes you can use thus method for hard drives as well.

Super FDisk should mount the flash drive for you then you can recover your files. There are lots of tutorials on how to use Super FDisk so I'm not going to give a blow by blow accounting of what you need to do. Simple do a search on your preferred search engine.

Not the answer you're looking for? Browse other questions tagged hard-drive usb usb-flash-drive or ask your own question.