How to force Windows 7 to ask for a "fresh" IP address from DHCP server?

I'm troubleshooting a certain issue with my DHCP configuration, and need my Windows machine to ask for a "fresh" IP address, so I can see which address DHCP server gives by default.

Question: How can I force Windows to just ask for a new IP address, without proposing its old IP address.

There is no procedure worth the effort. It's stored in a registry key, but that portion of the registry is cached while the network subsystem is running. So you'd have to shut the system down, boot another OS installation, mount the registry, delete the key, and then reboot into the original OS installation. The key is DhcpIPAddress but it is only used across reboots, so you can't modify it.

Running net stop dhcp and then net start dhcp appears to work on my Windows 7 test system. The resulting DHCP discover packet does not include Option 50.

I guess it's your choice if you want run ipconfig /release first in order to signal to the DHCP server that the IP address is available (it should remove the existing lease on the DHCP server).

So, to summarize, the whole process would be (in an Administrator cmd window):

If you wanted to indicate only a connection matching Local* (for example, Local Area Connection), then you could do: 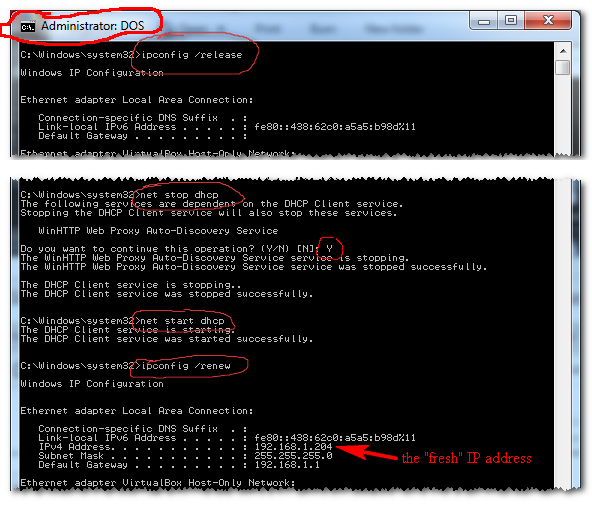 If your Ethernet driver supports it, you could change the MAC address on the NIC. It's usually a relatively painless procedure. Then ipconfig /renew should give you a new IP address. 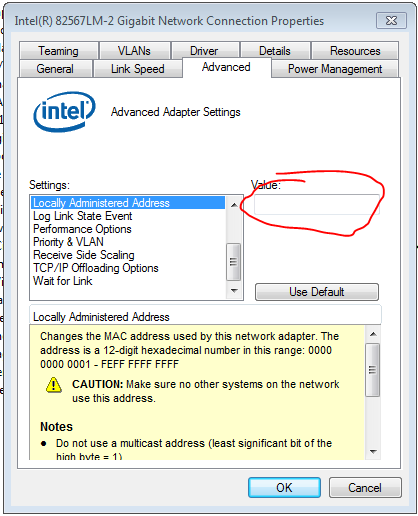 I found this solution here.

You could try configuring the DHCP server to give out addresses in a range that excludes the old address. Eg, if the old address is x.x.x.101, set the range to be x.x.x.120 to 130. I know you're interested in determining some default behavior of the server, so this may not be helpful if it alters the very thing you want to determine.

Step 1. Write down the IP address that you want to get rid of on the client:

Step 2. On the second computer, temporarily assign a manual IP address you wrote down in step 1. On the first computer where you are trying to change the DHCP reservation:

Step 3. The first computer will now get the next IP address that DHCP will offer. Remove the static address on the secondary machine by switching back to the DHCP setting.

I've just found a workaround. It does require changing the DHCP server configuration however:

The easiest way I found to force resting the IP, is to assign same DHCP IP to another PC as static IP, below are the steps:

It can be done by using Ethernet and WIFI adapters as well instead of using two PCs.

Not the answer you're looking for? Browse other questions tagged windows networking dhcp or ask your own question.

0
How to forcibly refresh and renew my IP address?