Can Firefox tell what it uses CPU for?

Each time I open a new page in Firefox, 1 CPU core is maxed out for 30 sec.

Can Firefox give some kind of information about what it uses the CPU for?

StatusbarEx is a Firefox extension that will show system information on statusbar of firefox, such as the memory usage of system & Firefox itself, network speed, system power status, etc. 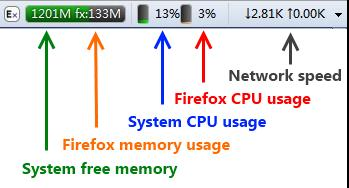 However, it doesn't work 'tab specific'. since Firefox (unlike other web browsers) is using threads instead of processes to open tabs, I doubt this is possible at all. Source

Disable all your extensions and load a page. If the cpu spike is gone, it's a problem with an extension. You can try enabling them one by one to find the culprit, or try a binary search to save work:

2
How to tell Firefox to give up on external content
9
How can I tell which tab or plugin is crashing Firefox?
0
What tools exist for monitoring the CPU and memory utilization of Firefox?
3
Measuring firefox CPU usage on Linux
1
Is there a way to tell which web page is running slowly in Firefox?
4
Why Google's results in Firefox is cpu consuming?
1
What Firefox tabs take more CPU and RAM, and how to stop it?