I have a ton of MKV files I need to convert to MP4 and my chosen software is Handbrake.

I'm stuck on which settings would be best for the conversion. I want to retain full quality. Do I just convert with the original settings and not change anything or is there any specific thing I need to change?

What's the problem with Handbrake?

When you're using Handbrake to convert from one container format to the other (i.e. MKV to MP4 in your case), Handbrake will re-encode the video. See also the respective feature request that would have enabled video passthrough:

So, anytime you're changing containers with Handbrake, your video is going to get re-encoded, which means it a) takes time and b) may introduce quality loss.

Do I have to re-encode? Couldn't I just swap the container?

Since passthrough is not possible, ask yourself: Do I need to re-encode? If you only want to change the container from MKV to MP4, you usually don't need to encode anything, you just change the "wrapping" around the video. This doesn't lose quality, and it'll be a much faster process.

You can swap containers easily with FFmpeg – you just have to tell it to copy the video and audio streams:

There are also tools like MP4Box which can also create MP4 containers — the same exists for MKV with MKVtoolnix.

However, there's a big caveat: this only works if the audio and video codecs are supported in the target (MP4) container, which is the case for H.264/H.265 and AAC, for example, but not for many others. Also, subtitle format support for MP4 is different from MKV, and actually quite restricted, so this command may fail.

Why is re-encoding bad, anyway?

You can (usually) not retain full quality when encoding a video that was already encoded. This is because the original has already been compressed by throwing away information, and by doing it again you're introducing generation loss.

Often, you want to re-encode video when for example its dimensions change, or you need a specific bit rate to squeeze your video stream into, or your original video uses a codec that you can't play for whatever reason.

So, if you load your MKV video into Handbrake, and re-encode it with x264, the H.264 encoder Handbrake uses, store it in an MP4 container, you are going to lose quality no matter what, unless you set the bitrate or quality factor so high that you won't (really) see the difference. But then, the file size will be bigger as well.

In the ideal case, you would convert the video to an uncompressed video, which won't lose you any quality, but give you files of a dozen Gigabytes in size, even for a few minutes of video material.

Okay, but I really have to re-encode!

If you really have to re-encode, make sure not to set an average bitrate, but choose a Constant Rate Factor, which is something like "constant quality". Just like "variable bit rate" for MP3: It will make sure to spend the bits on the video parts that need them and make the overall quality better — at the same file size.

Sane CRF values are from 19 to 24, where lower means "better". So, you could try with a Rate Factor of 19. Also, make sure to set the "High" profile, which enables the encoder to use all bells and whistles and optimize the quality for a given bit rate. 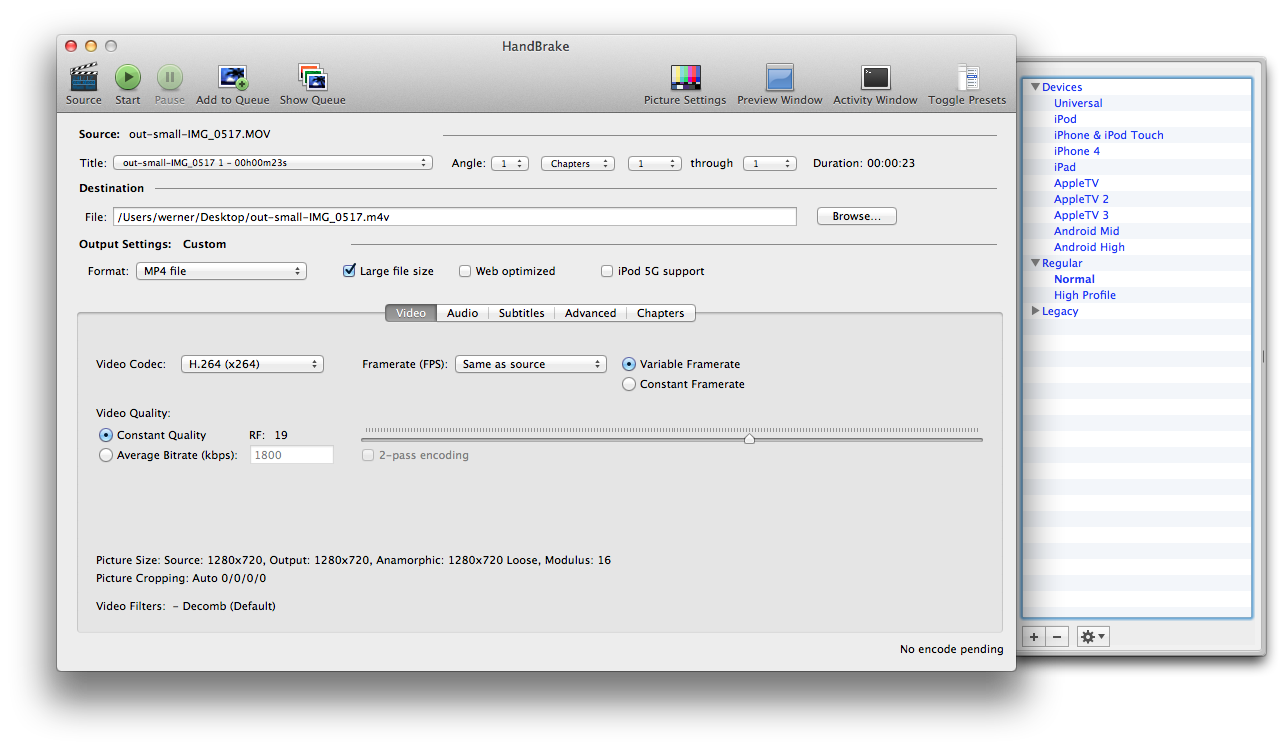 This works very well for me. Below is code to convert all .mkv to .mp4 files in windows.

Save in a file called convert.bat.

Not the answer you're looking for? Browse other questions tagged video-conversion mp4 matroska handbrake or ask your own question.

102
What is a Codec (e.g. DivX?), and how does it differ from a File Format (e.g. MPG)?
31
What is the "sameq" or "same_quant" option in FFmpeg? Does it mean "same quality"?
3
.MKV to .MP4 with 2 soundtrack (audio)
3
VLC player cannot play a specific video only when its matching srt file is present
2
FFmpeg converting by a context menu entry
0
Is there any way to passthrough an MKV file to MP4 without it ending up as HVC1?

7
How do I convert WTV (and DVR-MS) files into a smaller standard format?
10
Batch Convert .mkv to .mp4
32
Converting FLV to MP4 Using FFMPEG and Preserving the Quality
1
What is the fastest and best way to convert an rmvb video to mp4/mkv without losing any quality?
3
.MKV to .MP4 with 2 soundtrack (audio)
0
Handbrake doesn't keep Hi10p and HEVC after conversion
0
How to save compressed (batch processed) video files to the original folders using handbrake?
0
Reducing video's visual quality while retaining audio quality
0
How to convert 4K .mkv to .mp4 for YouTube