Is there a way to use Volume Shadow Copy on Windows 8?

I can't find the Previous Versions tab that used to be available, and I see that there is now the new File History thing, but it only appears to back up libraries. But I want it for all of my folders. Is there any way to do this on Windows 8?

Volume Shadow Copy could be hit-or-miss, but if you allocated a lot of space to it (as I did), it seemed to be quite reliable.

I could be going out on a limb here but I think shadow copy is alive and well! Microsoft removed all the GUI's that's all.

mount what you see after "Shadow Copy Volume:"

Note: you need to add a trailing slash after the address as shown, took me forever to figure it.

Whats even more interesting is vssadmin list shadows shows Attributes: Persistent and every thing on the internet makes out you can only make volatile shadow copies?? Tell me if I'm interpreting this wrong folks!

Justin in partially correct, but Shadow Copy and File History are not the same under the covers. Shadow Copy does not exist in Windows 8, File History uses the NTFS Change Journal to track changes. See below for details.

Both Backup and Restore and the "Previous Versions" interface, features that used Shadow Copy, have been deprecated on Windows 8 in favor of the new File History function. Unlike Shadow Copy, which performs block level tracking of files, File History only utilizes the USN Journal to track changes, and simply copies previous versions of files to the backup location.[42] Shadow Copy itself is still available for other software to use; additionally, it is still possible to access previous versions of shared files stored on a Windows Server computer.[80]

There can be issues with Shadow Copies, so moving away from this seems like a good change. "One disturbing thing I did learn about Windows backup is that it uses NTFS Shadow Copies to keep prior versions. One (IMHO) extremely dangerous result of this is that if you ever connect your backup disk to a Windows XP system you'll loose all the prior versions, since XP's version of NTFS doesn't understand multiple shadow copies and so silently deletes everything except the most recent one. This raised all kinds of red flags for me since when I started with Windows 7 I was using the same backup drives to back up both it and my older XP system."

So basically, Windows 7 backup used block level file tracking and Shadow Copies, while Windows 8 uses the NTFS Change Journal to detect changes and copies files to a backup location that the user chooses, which can be a network share.

Here's the official blog from MSDN.

In Windows 8 the Shadow Volume Copy service has been replaced with the File History feature. Under the covers the same technology is being used to perform the copying, however the way that it is exposed to the end user has changed.

For information on how to use the File History feature see How to Use the New File History Feature in Windows 8. 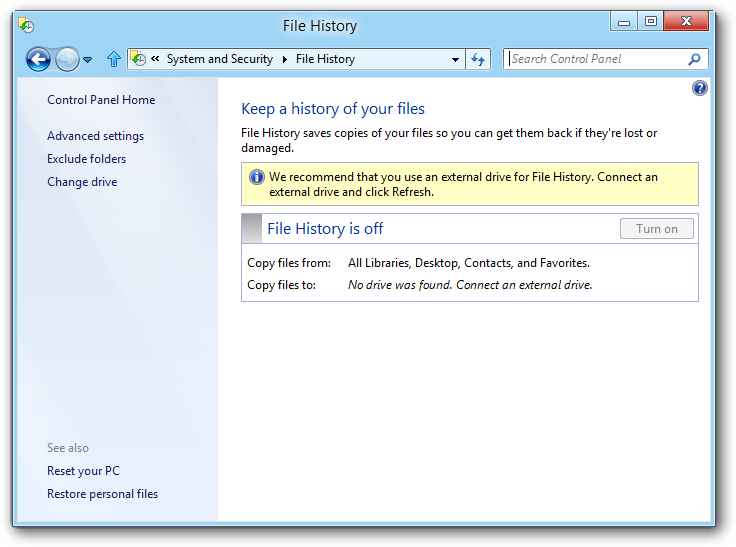 From this page you can turn on the feature, select the target location to copy files to and specify advanced options such as how frequently to take snapshots and how long to keep files for.

To restore a file you can then use the "File History" button in explorer to restore deleted files, or to restore earlier versions of existing files. 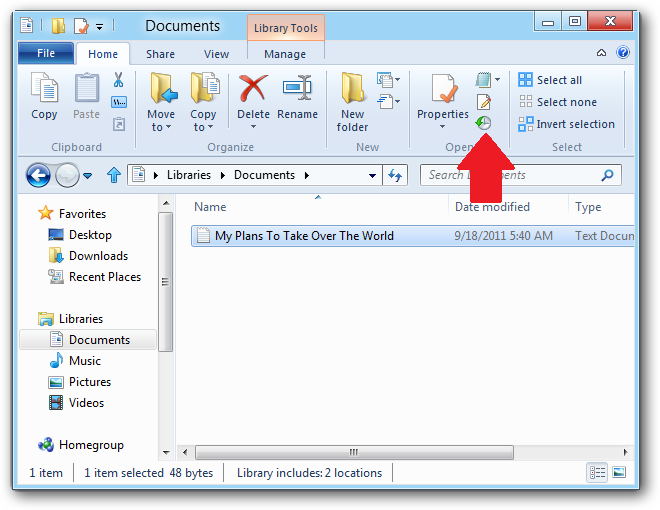 There is also more detailed information on this feature on the "Building Windows 8" blog under Protecting user files with File History.

The old-Windows 7 style backup is still available in Windows 8. Just search for Windows 7 File Recovery and you will get it: 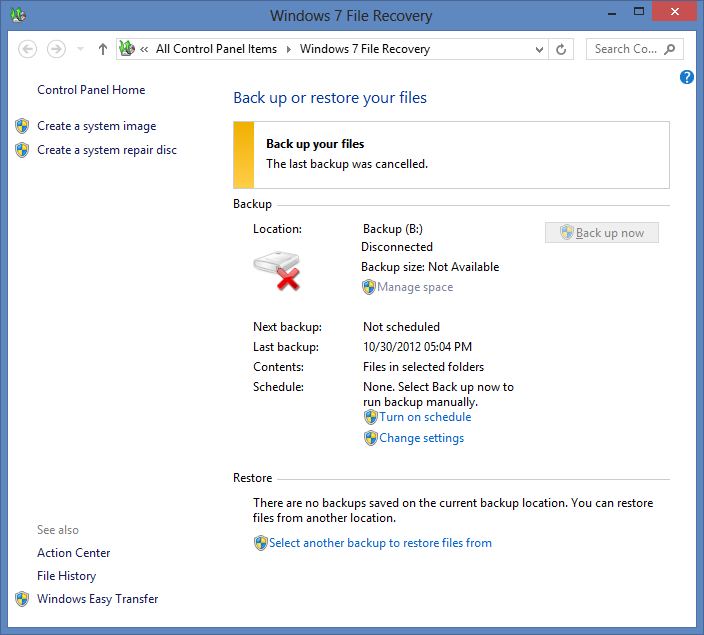 Not the answer you're looking for? Browse other questions tagged backup windows-8 volume-shadow-copy or ask your own question.