My NTLDR recently went missing, and I was able to fix that. However, now my BOOTMGR is also missing, and I have tried all the solutions on the whole Internet to fix it. Below are the actions I've taken in the recovery command prompt:

So how do I restore my BOOTMGR without having to reinstall?

Just an additional comment in hopes I can help the next person trying to deal with boot issues... especially after an update.

The screenshot that Will put up there is from a Vista install disc. The Windows 2008 repair options did NOT include the "Startup Repair" option (oddly enough). So, on a whim, I decided to try a Vista install disc and, sure enough, the option was there and once I selected that option - my Windows Server 2008 server FINALLY booted again.

I have no idea why MS decided to include the option on Vista discs but not 2008 discs, but this is something worth trying if you are pulling your hair out like I was. All my attempts to do command line restores were useless... I would have never imagined that a Vista install CD would do the trick.

I ended up having to install Windows Server 2008 on another drive, which built a new bootloader. I updated my boot loader to select the old one only and wiped the new install so as to remain in adherence to the license.

If you put the disk (either Windows Vista or 2008) in and click repair, it should be able to scan for common startup problems. One of them will check for the Boot Manager files and active partitions e.t.c.

It should be able to get you going quickly. If the automatic scanner doesn't work, you may have to click on the "Startup Repair" option. 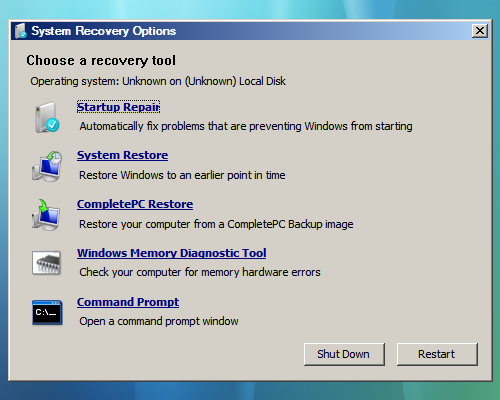 Not the answer you're looking for? Browse other questions tagged boot partitioning windows-server-2008 bootloader or ask your own question.

0
Bootrec freezes - Do I need to reinstall?