Is there a way to make Windows 8 delay loading the start screen until all startup programs have loaded?

Currently Windows 8 will get to the start screen a good 10-15 seconds before my startup programs have loaded. Since these include my touchpad driver as well as a gamma correction program, I would prefer that they would load before this point. Is there anyway to do this - either by delaying Windows 8 showing the start screen, or perhaps by somehow having these programs run before reaching the login screen?

Create a startup script, the computer will wait for these to finish. So, you can either implement a simple sleep OR something that waits for both programs to be present, perhaps with a timeout to prevent the script from hanging and not allowing you to login.

How do I write a batch script with a timeout?

To be able to let a script wait the traditional trick has been to ping an IP that doesn't exist.

This command will try to send one ping and will let it time out in 10 seconds, as 10000 ms is 10 times 1000 ms. We pipe this into nul such that the output does not get shown, this might not be necessary as you are doing a startup script but it's placed here for completeness.

As mentioned by Bob in the comments, since Windows Vista you are also able to instead use:

More information about this variant can be found here.

How do I write a batch script that waits for a process to end?

An alternative is to use this batch script to wait for the processes to finish.

You need to place the set commands at tho top and everything starting from the :STOPPROC (including that line) at the bottom of your script, do not include the ----------- lines though.

Then, in the middle you can place calls to call :STOPPROC notepad.exe which will wait for each subsequent process to be closed.

How do I let the computer run my startup script?

See this link I've posted earlier which explains it in details:

Is there another way that doesn't involve waiting?

Honestly, you might consider not to do this and just use your keyboard on the start screen instead. I would be bothered waiting longer on the login screen when I could already start a program using my keyboard...

Make sure to check out Windows8Fanatic's answer as well, to attempt to minimize the delay.

You can also speed up the loading of your application by disabling other apps which have a high impact on start-up. Thus you may only enable essential ones giving a speedup performance of few more seconds.

To Enable or Disable Startup Items in Task Manager

If the Disable button is grayed out, then it means that you must be signed in as an administrator to be able to. Also you may try to disable atleast those having maximum startup impact. 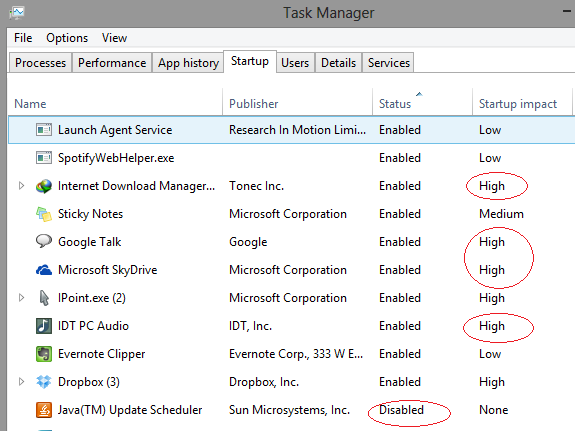 Create a startup script that looks something like this:

Caveat emptor: I have not test this.

Not the answer you're looking for? Browse other questions tagged boot windows-8 desktop delay or ask your own question.

2
Vista takes a long time to startup on a weird place: after the loading screen but before the WIMP
0
Windows 7 Screen/Colour Freeze
0
Is there any way to check the Disk I/O that happens after startup and the duration for each task?
1
Windows - Automatic log-in, then log off after first log-in only