I've got a daemon process that I run on my machine every hour, and even though I've checked the Hidden box, it doesn't work. 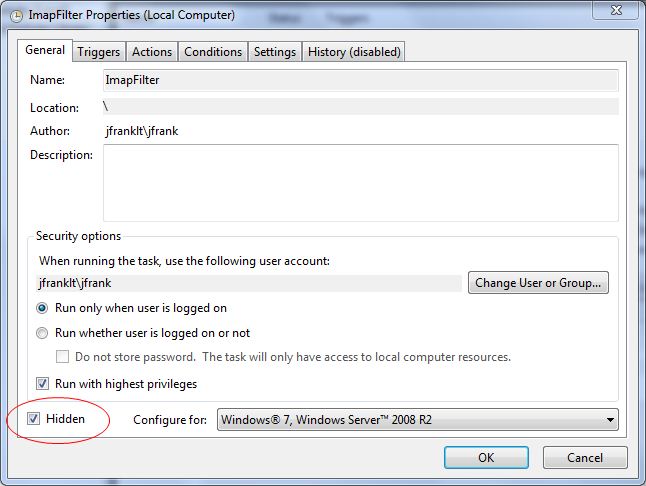 Every hour, the task runs, but it shows the black command window, in which my .NET Console app is running. This stays visible until the task completes, and then disappears. This is very annoying, because it pops up and interrupts whatever I'm doing: 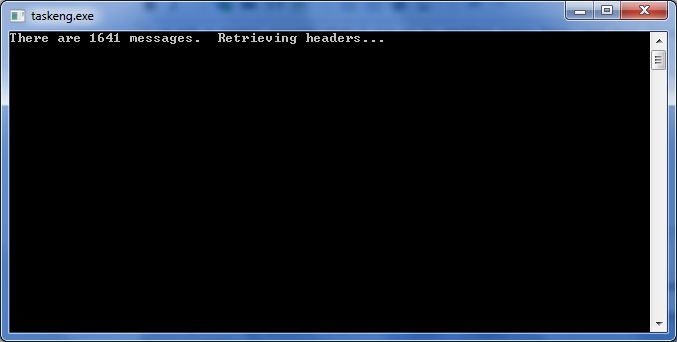 I really do want it hidden, so how can I fix this?

Check the "Run whether user is logged on or not" check box and executable will run in the background.

Why is Windows 7 scheduled task running hidden? should explain why this happens.

When you create a task in a task folder, you must name the task. No two tasks can have the same name if they are in the same task folder. The task description is optional.

By default, hidden tasks are not shown in the Task Scheduler user interface. You can view hidden tasks when Show Hidden Tasks is selected in the View menu. You make a task hidden when you click the Hidden check box on the General tab of the Task Properties or Create Task dialog box.

Doesn't this imply that the checkbox only hides the task itself from the scheduler's UI, and not the actual program that's scheduled?

Okay, after some more research I found this answer on StackOverflow:

To setup a Scheduled Task to run in background, change the User running the task to SYSTEM, and nothing will appear on your screen.

A comment points out that this grants full rights to the task, which could be annoying, but is acceptable in this case.

But still, what does Hidden do, if it doesn't do this? And why would the user account running the program have anything to do with whether it's visible?

If those are deal breakers for you, the ultimate solution is to create JS script file like the one below, that will run your command in hidden window, wait for your command to terminate and return its error code:

Save this as js file (myjob.js) and add this to your task scheduler: 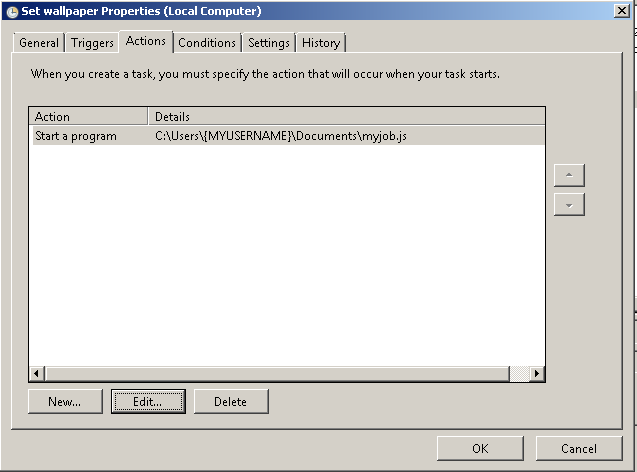 "Run whether user is logged on or not" will allow the hidden option to work. Note that you need provide your credentials after you choose this.

will prevent the black command window, but be aware of the drawbacks : you won't be able the work with some GUI automation tools like 'AutoIt' or SendKeys in PowerShell, as Windows launch the tasks in a headless style environment.

I leave the default settings and write short custom programs that spawn the execution without a window showing. For example, to run a batch file without popping up a command prompt window, use the code below. Set the task to spawn "RunBatchFile.exe (path_to_batch_file)".

I was having this problem with powershell scheduled tasks (that I was deploying through GPO). I ended up wrapping it in a command window:

Not the answer you're looking for? Browse other questions tagged windows-7 task-scheduler or ask your own question.

19
Stop taskeng.exe window from popping up
16
Why is Windows 7 scheduled task running hidden?
1
How to run AutoHotKey script as an admin every time a user logs in?