How do I get my Nvidia monitor position settings (in Linux) to persist after a restart?

I have two monitors, and I run them both in Linux using the proprietary Nvidia drivers with "TwinView". I just installed Linux Mint 13, and since the install after every reboot my monitors come up in the wrong position (the computer thinks the left monitor is on the right).

After boot-up I can run the Nvidia config and fix the monitors' position, and I can even save the configuration file successfully. But as soon as I restart again, the monitors re-appear switched.

Does anyone have any idea what might be causing this (and more importantly, how I can solve it?)

I tried manually editing my xorg.conf as follows:

but the wrong monitor still comes up on the right.

If I change "RightOf" to "LeftOf", I boot in to a black screen and a frozen mouse/keyboard.

Run sudo nvida-settings and click on "Save to X configuration file": 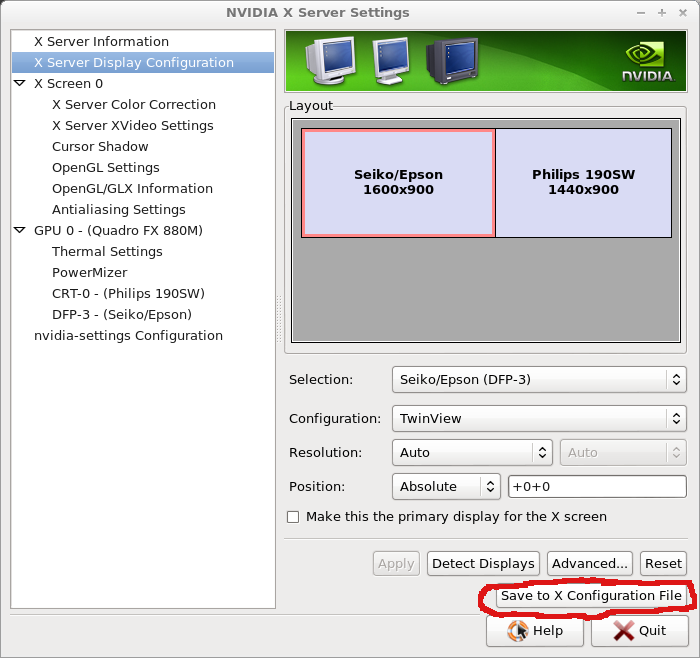 If that doesn't work, try the following:

The following resources are a great source of information for xorg.conf and NVIDIA:

I have this script that I made (I'm new to scripting so it might suck) for almost the same situation. This turns off my laptop screen and uses the two monitor screens I have. Commented out the parts I don't think you need. Please let me know if this works for you

If that doesn't work, go to your terminal and type in xrandr to find out your monitor names. Change which one is left and right... yeah.

To run script on startup, Google that for your kernel... I got to get to class :\

Not the answer you're looking for? Browse other questions tagged linux linux-mint nvidia-graphics-card or ask your own question.